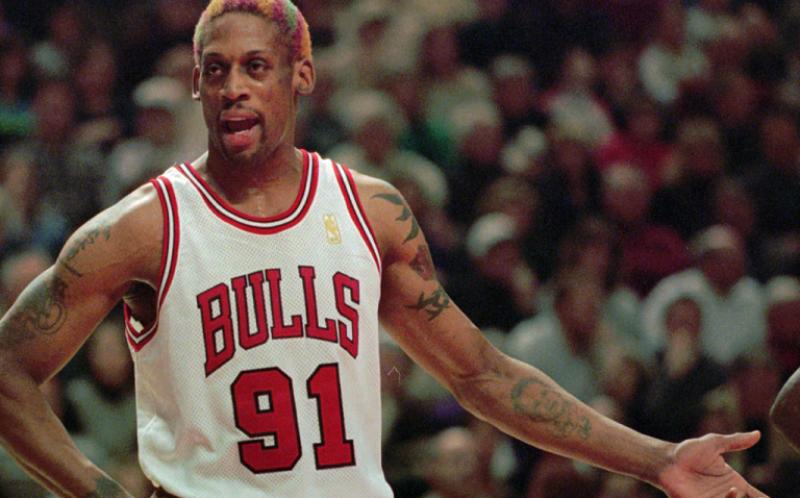 Michael Jordan, Phil Jackson and the Chicago Bulls knew Dennis Rodman always delivered when the heat was on

"Some birds aren't meant to be caged. Their feathers are just too bright. And when they fly away, the part of you that knows it was a sin to lock them up does rejoice. Still, the place you live in is that much more drab and empty that they're gone.”

- Morgan Freeman as 'Red' in the Shawshank Redemption

Netflix delivered a gem to the sporting fraternity recently in the form of 'The Last Dance', a behind the scenes documentary following the Chicago Bulls during their six NBA titles in eight seasons during the 1990s.

It was casual watching and not needing much concentration, but interesting on a range of different levels.

The footage of Michael Jordan was just enthralling. His demand for the highest of standards turned around the fortunes of the underperforming Bulls. His brilliance gave him locker room clout beyond his newcomer status.

His power to jump and score was sizzling. When he leapt off the court, he was a genius. The Bulls went from winning just over a third of their games to pushing for glory and he was named as Rookie of the Year in his first season.

As the series began to pan out, it was centred around three main players and their personalities – Jordan, Scottie Pippen and later Dennis Rodman.

Tangled in the storyline was Scottie being grossly underpaid for what he was offering the team. It led to a fallout with the franchise General Manager Jerry Krause.

One glance at Dennis Rodman made me think more about team dynamics. He is the ultimate maverick. He came from a broken home but somehow escaped the drug culture that passed by in front of his eyes.

The day he lifted a basketball saved him. A family friend saw enough to tip off a local school basketball coach and it was his passport to college and eventually the Detroit Pistons.

The Pistons were labelled the 'bad-boys' of the NBA. They got into teams' faces and under their skins and they developed nasty rivalry with the Bulls.

Rodman morphed into one of their most influential players and built up a terrific relationship with coach Chuck Daly. So much so, than when Daly – a father figure almost – resigned, Dennis went off the rails. He was a troubled individual and demanded a transfer.

He also dated music star Madonna who convinced him that he needed to express himself and be who he wanted to be and not how others wanted him to fit.

After a spell with the San Antonio Spurs, Rodman moved on to the Bulls. It was a gamble. The club hierarchy went on a hunch that Dennis would be safe due to the presence of Jordan and Pippen and how they would steer and inspire him.

The other factor was the most important – coach Phil Jackson. They knew he could handle him.

A glance at Rodman and he is not your everyday player. Tattoos, jewellery all over his face and a hairstyle that changes day on day. Even on one occasion, he had '33' (Pippen's squad number) bleached all through his hair, to mark his teammate's return to the court from injury.

Rodman made me think of that line from the Shawshank Redemption. The one Red mutters when the innocent Andy is on the the brink of escape – some birds are too beautiful to cage.

And Rodman knew his worth.

“You've got the great Michael Jordan, the great Scottie Pippen and the great (coach) Phil Jackson...you take me away from this team...do they still win the championship? I don't think so,” was one of his comments during the documentary.

Everybody else knew it too. In 1998 when the Bulls were chasing their sixth title, Rodman requested some leave time in mid-season and was granted 48 hours. As Jordan expected, Dennis went AWOL in Las Vegas and they had to go to get him back.

On return to training, Jackson put the Bulls through their paces to blow the black smoke out of Rodman's system from his time off the rails.

The old fashioned back to the front runs. During laps the player at the back had to sprint to the front, all the way around the court. The GAA pre-season drill from hell. The Bulls players plotted to take it easy on Rodman -and themselves – by keeping the pace low. But when it was his turn, their colourful colleague blew them away and they spent the the rest of the session chasing him.

They didn't need to worry. His natural fitness levels could absorb time away from training. The support structures around him were strong. He was motivated by winning and coach Taylor understood the concept of not everyone being the same.  You can't put a saddle on a mustang, Chuck Daly once said.

Welcome the concept of the maverick. For the manager in team sports, it can be easy to pigeon hole everyone into the same category. That way, you have a simple team ethos and if someone steps out of line, the pre-written rules leave the decision to omit someone easy.

“At the start of the year, everyone knew the story,” would be the narrative.

But not everyone is the same. Why should they be?

The challenge is how to manage on a different scale. Some need a kick up the ass, some need an arm around the shoulder.

But in a team scenario, not everybody fits. If someone is too disruptive, has nothing to offer the team and won't meet the coaches 'rules' somewhere in the middle – then cutting them loose is the only option.

I remember chatting to former Dungiven manager Jim McGroarty a few weeks ago. He uttered a statement along the lines of...anyone can throw down a load of cones and copy drills off their phone and call themselves a coach, but management is about so much more.

He is so right.

Having not covered a game of sport since St Pius won their MacLarnon semi-final, watching sport on television has been filling the gap. It has also led to a period of reflection. If we are lucky enough to get through all this, sport should resume in a better place – if team managers have also used their time to reflect and not just find a better way of playing 12 or 13 men behind the ball.

Gerry McElhinney waltzing through the heart of the Dublin midfield, Maradona tearing strips of the England defence in 1986 and Michael Jordan dunking shots with his back to the basket - these are the people who build a legacy.

They are players who will inspire and – if managed properly - are the difference between a team being average and great.

Without them, sport is dull. These are the players teams need to revolve around. Development should not be about seeing how many athletes you can find that can handpass with perfection and follow out orders. Anyone could do that.

Dennis Rodman and the mavericks need to meet the team ethos halfway down the path. If they don't, then you can say you tried and agree to go your separate ways. If they understand the word compromise, then so too should the manager. If they can't differentiate between their ego with the ego of others, they shouldn't be managing.

- Give goalkeepers another option.  More...