Can you believe it! An Apprentice Boy dancing an Irish jig with a nun 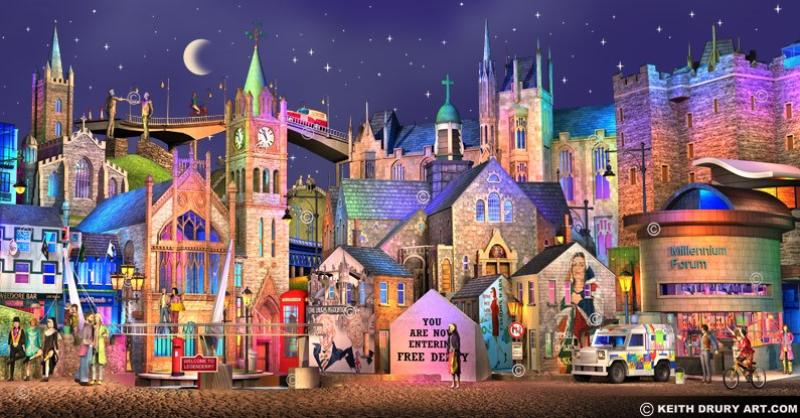 The creator of a new 3D artwork inspired by Derry has said he aimed to celebrate the city’s cultural diversity and most famous landmarks.

The Derry piece received a positive reaction on social media with many locals seeing the humour in it.

Artist, Keith Drury, has a gallery at Crossgar in County Down but is originally from Belfast.  He has created numerous works reflecting different parts of Northern Ireland and other famous cities around the world.

Each piece can be personalised, some buyers have opted to add their house or a special anniversary while a number of shrewd workmen have also requested that their white vans be included, business logo and all.

The most heartfelt customisation came from individuals who made marriage proposals to their loved ones using Keith’s art.  When the couples visited his gallery to collect their purchase a message was written saying, ‘will you marry me?’

The artist proudly declared that there has been a 100% success rate to date.

Keith’s career path has been somewhat unconventional, he studied two courses at university, neither of which were art related.

Many artists are self-taught, he explained, which can be advantageous allowing them to develop their own unique approach and techniques by drawing upon life experiences.

Around ten years ago Keith began working in his garage and sold a few paintings a year but soon realised it ‘wasn’t going to pay the mortgage’.  He decided to focus on book design and through that delved into the world of 3D art.

It is a far cry from the oil paintings Keith produced as a child.  Following a visit to the museum with his father, who educated him on culture, Keith said, ‘anybody could do better than that’.

Putting him to the test, his father produced oil paints, and encouraged him to create his own artwork.  It was a skill he honed throughout his life before pursuing a career in book design. 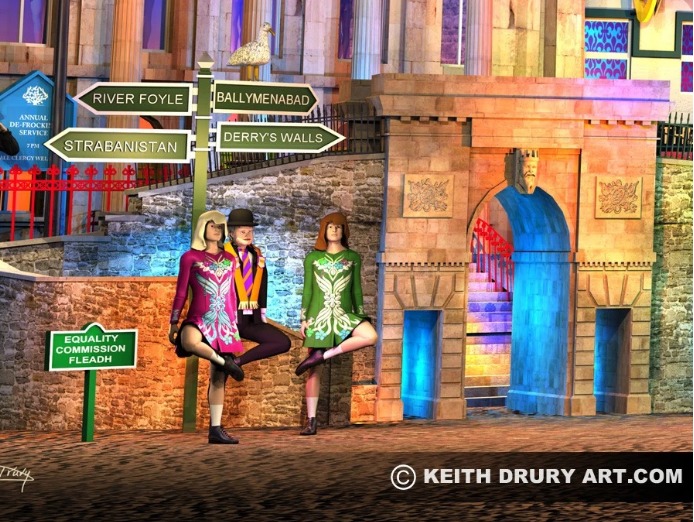 Drawing for books could be an arduous process if a character had to be repositioned but Keith discovered new animation software that made it easy to interchange people and buildings on the page.

“At the beginning I didn’t know where to start, I didn’t recognise a single term and had to teach myself how to use the software.  It was a steep learning curve.”

After reading books and taking training modules he mastered the software and is now running a successful business with a style that provides a contemporary interpretation of the urban landscape.

The artworks are created simply to be enjoyed and to be a talking point on anyone's wall and could be defined by amending Oscar Wilde’s famous expression, ‘Art is too important to be taken seriously!’

The 45-year-old’s art looks at different countries and cities, packing in the most famous landmarks and traditions of each place.

Those relating to Northern Ireland pay homage to individual accomplishments while also being informed by different traditions that exist.

For example, a Belfast artwork highlight inventions that were born in Northern Ireland such as the portable defibrillator invented by Professor Frank Pantridge and pneumatic tyres developed by John Boyd Dunlop.

Some of these great achievements go unrecognised and are under-appreciated.  Keith believes that other cities would honour such people in museums.

Designs are inflected with humour, such as the ‘Irish dancing Orangemen’ in the Derry piece.  They are also reflective of the here and now, meaning that if they were put in a time capsule, the people who found them would be able to date the images.

Building the Guildhall proved difficult as it has to be sculpted using the software and then the rivers and hills are built around it.

“Every picture is created by a lot of painstaking hours spent making little models in intricate detail. Everything you see in each picture is a model, even the clouds are transparent models which are carefully sculpted.

“The only exception are the stars - we tried modelling them but weren't happy with the result.”

Looking to the future, Keith is developing a new series called Frida, who is the main protagonist in the oil painted series, where she commonly features writing and drawing on objects.

Virtual reality is another avenue he’s exploring with his team.