What's the connection between Hippocrates, an ancient oriental tree and the walls of Derry?

Poignant act of remembrance to take place on December 8. 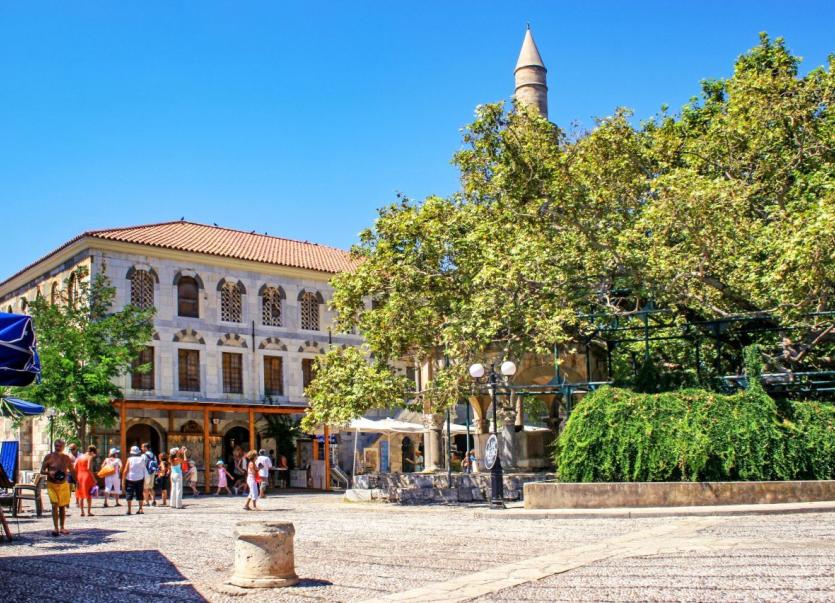 A sapling from the Plane Tree of Kos is to be planted in Derry.

It’s the type of event that in decades to come may prompt a very difficult question even for the most avid and astute of Derry’s historians.

So, what is the connection between Hippocrates the father of medicine, an ancient oriental tree, a Greek born medical consultant and the section of Derry’s Walls that the terraced houses of Nailors’ Row once nestled under?

Every week, hundreds, maybe thousands of us, walk through historic Bishop’s Gate to and from the city centre. But how many of us pay more than a cursory glance to the beautiful patch of sculpted greenery that lies on the right-hand side of the road just outside the walled city?

In your mind you may have fleetingly admired its prettiness and thought it a vast improvement on the strip of plain grass that used be there. Just around the corner from the end of the garden, it gives way to steep green slopes that roll downwards the Bogside.

It is a site that has seen its fair share of trouble over the decades standing as it does right on the boundary between the Fountain and the Bogside. The at times, serious sectarian clashes there have seen it labelled with one of those cold and condemnatory Northern Ireland terms – interface.

However, since November 2013 that small piece of land right in the middle of the often wrongly maligned trouble spot has stood as a quiet beacon to something that should truly unify us all – the gift of good health.

It is known as the New Life Garden and is a place of reflection for those who have been given a second crack at existence through organ donation.

Whilst the garden is dedicated to all those who have both received and given all transplantable organs either as living donors or through donation after death, a local group based at the city’s hospital has championed the garden and the spirit in which it was created.

The words on a stone monument in the heart of the garden erected by the Altnagelvin Renal Support Group state: “This Garden of Life celebrates the gift of new life through organ donation and gives thanks to all organ donors, both living and deceased, for their tremendous generosity and empathy in providing new life through their selfless sacrifice.”

When the garden was opened six years ago, the official ceremony was attended by representatives of all the city’s main churches, the Northern Ireland Kidney Patients Association, the Fountain and Bogside communities, residents of nearby Alexander House and many people from the then Derry City Council who backed the project. The commemorative garden was also integrated with St Columba’s Peace Garden which occupies the same space.

On a chosen Sunday each Christmas time since 2013, as people with arms weighed down with shopping bags in preparation for the festive period hurry by, a group of people gather at the garden to do what it says on the monument – give thanks and remember.

The annual ceremony isn’t one that pays attention to either pomp or circumstance. Instead, it’s conducted quietly and reverently, consisting mainly of a few meaningful, heartfelt words by someone who has faced the crushing ordeal of facing leaving life before the inexpressible and joyous relief of having it prolonged by those who have been kind and brave enough to donate.

Prayers and a few well-chosen hymns and songs only add to the poignancy of the occasion.

With each passing year some of the faces are no longer there, but their families are. New faces are also there – new because they have been added to the list awaiting a new kidney, a new heart, liver or lung.

Those who already have done or are waiting to provide a new lease of life are also there, as are the families of those who by their passing handed on extended life to many others. The garden is also where those awaiting a transplant can visit and gain strength.

What however, has that got to do with Hippocrates, an ancient oriental tree and specialist medic from modern Greece?

The Plane Tree of Kos, or the Tree of Hippocrates according to legend, is the place where in ancient Greece the father of medicine taught his students. The current 12-foot high tree in the centre of Kos is only around 500 years old but is believed to be a descendant of the original tree which stood there over two and a half thousand years ago.

Seeds or cuttings from the tree have been transported all over the world and one will soon be planted at the New Life Garden in Derry.

It will not be the first time a cutting of the famed tree has been placed in Northern Ireland. The practice was first initiated by an intriguing doctor who landed on these shores in the 1960s and who sadly passed away in 2012.

Dr Dimitrios Oreopoulous was born in Alexandroupolis and was one of five brothers who grew up in impoverished circumstances. However, he managed to get admitted to the medical school at the University of Athens and received his specialist certificate in 1963. He then moved to the City Hospital in Belfast as a renal registrar where he completed his PhD in nephrology.

Upon completion of his studies in Belfast Dr Oreopoulous was recruited by the Toronto Western Hospital where he continued his research at the Metabolic Renal Unit.

It was in 1966 whilst studying at Queen’s that the Greek medic presented seeds from the Plane Tree of Kos to both the university and Erskine House at the City Hospital where it continues to thrive to this day. In fact, in 2017, the Erskine House Tree was nominated and won the Woodland Trust’s Tree of the Year competition.

In turn, Dr James Douglas, former consultant Nephrologist at Belfast City Hospital, took several cuttings from the Erskine House Tree and these have now matured into saplings ready to be transferred to the New Life Gardens across Northern Ireland. Outside of Derry, other gardens can be found at Kiltonga in Newtonards and at Botanic Gardens in Belfast next door to Queen’s University.

Patron of Northern Ireland Kidney Patients, Eamonn Holmes said of the tree at Belfast City Hospital being named tree of the year: “The Erskine House Tree means many things to many different people throughout the world, especially the transplant family. I am delighted that the tree has received prestigious accolade and will forever remain a symbol of the ‘Gift of Life’ and a representation of our brave organ donors.”

According to the Department of Health, around 200 people are waiting for an organ transplant, and sadly, around 15 people die each year while on the waiting list.

If you want to add your name to the NHS Organ Donor Register you can either register online at the Organ Donation NI website at https://www.organdonationni.info/ or telephone 0300 123 23 23.

A lesser known option is the possibility of becoming a living donor and the most common type in this respect is kidney donation. This takes place when one kidney is removed from a healthy person and transplanted into someone else, often a relative.

Quite rightly, the NHS point out that this is a major decision to make and everyone who comes forward undergoes a thorough assessment. All live donors and recipients are reviewed by an independent assessor who makes sure there is no pressure or coercion involved and that all parties understand the risks of complications.

To make the distinction, the Organ Donor Register is only for those who wish to donate after death – to become a living donor, you must contact a transplant centre directly. The Living Donation Kidney Transplant Team can be contacted at Belfast City Hospital also on 0300 123 23 23. The team have also released a strategy paper on live kidney donation which can be viewed at https://www.odt.nhs.uk/odt-structures-and-standards/key-strategies/living-donor-transplantation-strategy-2020/.

The annual service of remembrance organised by the Altnagelvin Renal Support Group, including the planting of the Plane tree sapling, takes place this year on Sunday, December 8 at the New Life Garden, Nailors Row at 3pm. All are welcome to attend.