Candystripes home to Treaty United in the semi-finals 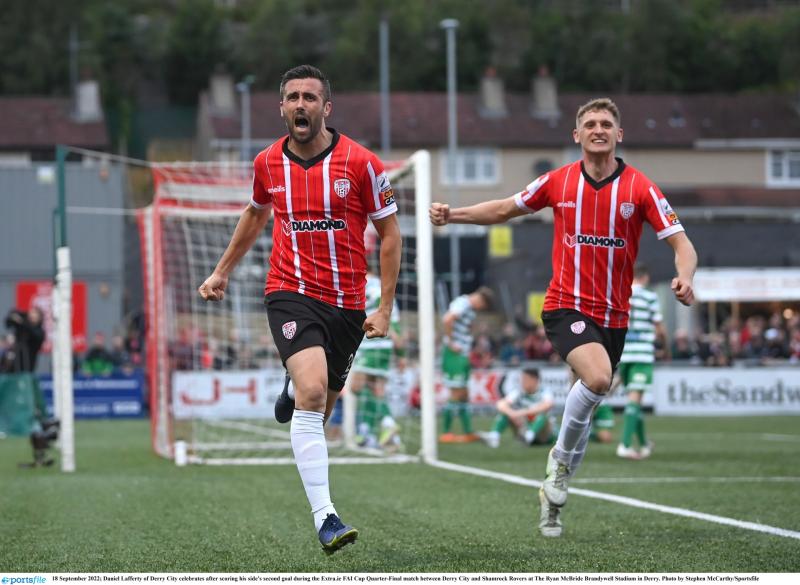 Derry City saw off Shamrock Rovers to set up an FAI Cup semi-final with First Division Treaty United at the Brandywell.

Danny Lafferty and Brandon Kavanagh both scored to finally see off 10-man Rovers just when it looked like the champions had deflated the sold-out crowd.

Jamie McGonigle had given City the lead early, before Lee Grace was red-carded ahead of a penalty miss from Will Patching. But the drama was just starting on a memorable evening.

Derry City should have taken the lead after just six minutes when Will Patching’s free kick into a packed penalty area, came all the way to an unmarked Cameron Dummigan at the back post. The midfielder controlled it perfectly with his first touch, but his shot was too straight at goalkeeper Leon Pohls, who parried it away for a corner.

The Brandywell fans were celebrating on 19 minutes however when their team took the lead. Cameron McJannet’s cross picked out the run of Mark Connolly who ghosted in at the back post. The defender’s first touch took the opportunity to shoot away from him, but he still managed to hook a cross in towards the back post where Jamie McGonigle arrived to head the ball down past Pohls and into the net.

There was incredible drama in the game on 39 minutes as Patrick McEleney latched onto a long ball behind the Rovers defence, only to be brought down by Lee Grace. Referee Rob Hennessey immediately pointed to the penalty spot and produced a red card to the Rovers defender who was aghast at the decision.

Regardless of the complaints, City had the chance to go 2-0 up, but just as he did a month ago, Will Patching failed from the spot again, as his effort hit the top of the bar and went behind for a goal kick.

The Brandywell was silenced on 66 minutes however when Rovers equalised with their first real chance of the game. Neil Farugia powered into the Derry area with a brilliant run and his pull back found Andy Lyons, whose shot was saved by Maher, but the City goalkeeper could do nothing which was fired into the net by Gaffney to equalise.

The home side could have won it in added time at the end of the game when Duffy’s corner was met by McJannet, but his downward header bounced past the wrong side of the post.

The Brandywell desperately needed a lift from somewhere, and it wasn’t long in arriving as Duffy swung in a corner and substitute Danny Lafferty met it with a bullet header to restore Derry City’s lead on 96 minutes.

It got even better for Derry City in the second half of extra time when substitute Brandon Kavanagh broke into the area on his left foot and cooly stroked the ball into the corner to make it 3-1 and send City in to the last four.