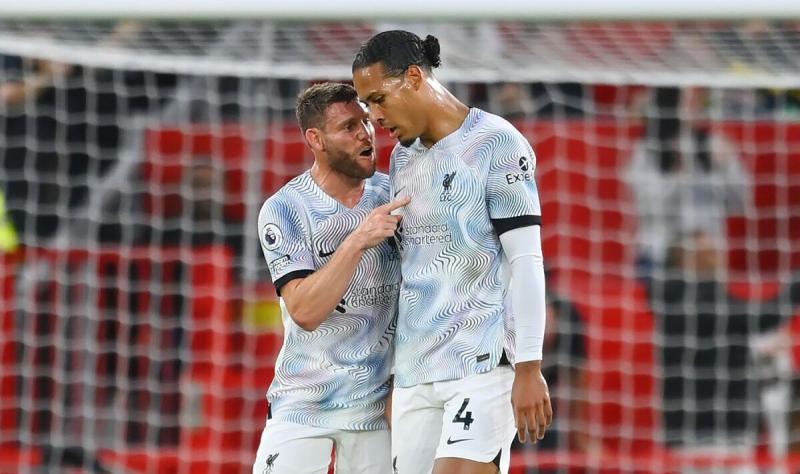 Above: What’s the point of me making you my triple captain if you’re going to stand holding your backside!?

Not that we needed reminding, but the past weekend has again shown just how unpredictable the Premier League really is, which makes our jobs as Fantasy Football managers all the more difficult.

In this game, the cream really does rise to the top, because if you can get a high score week in and week out in a league as unpredictable as this, then you really do know what you’re doing.

Who could have foreseen Leeds battering Chelsea for example, or Newcastle taking it to Man. City, or even more bizarrely, United BEATING Liverpool!? If you managed a decent score this past weekend, then you can definitely hold your head high, unlike Virgil Van Dijk and Trent Alexander-Arnold, who played their own game of ‘Musical Statues’ at Old Trafford on Monday night.

Three weeks in, we have a third new leader as Andy Shiels jumped from eighth place to first place with 59 points for his ‘Letsgoooo’ team. 59 points isn’t the greatest return in the world, but that just shows how hard points were to come by this time around. In fact, had Andy not used his ‘Bench Boost’, he wouldn’t be anywhere near the top, but Emiliano Martinez with 10 points and Alain Saint-Maxim with 13 points really helped him out.

Marty McGrath’s ‘Stranger Ings’ scored the week’s highest total of 78 points which catapulted him into the top 15. His midfield of Rodrigo, Martinelli, Salah and Andreas brought him 35 points, while Perisic in defence with 12 also took him flying up the table. It could have been even better had he not had Sancho on the bench, but he can still be pleased with his work this time around.

Michael Coyle’s fittingly-named ‘Mind the Gap’ was the lowest scoring team of Week 3. He went for Chelsea defenders Thiago Silva and James, Man. City defender Walker and Liverpool’s TAA, and four of which had an absolute nightmare. Luis Diaz, Son and Eze in midfield added up to just 8 points and with Haaland, Havertz and Jesus not what you would call prolific, he plummeted to a measly 28 points.

If you wish to join the Fantasy Football, follow the link: https://fantasy.premierleague.com/leagues/auto-join/8okgsb

Next week sees the first monthly winner of the Brunswick Moviebowl ‘Meal Deal’, and there are so many in contention. It’s still early days, so don’t lose hope just yet. But maybe leave Van Dijk out of your team for a while.