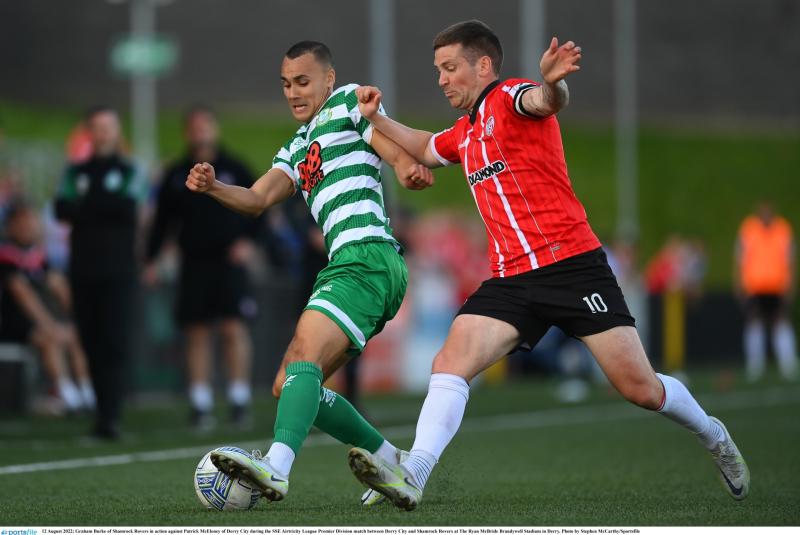 Derry City were left to rue a penalty miss, and a wonderful performance from Shamrock Rovers goalkeeper Alan Mannus, as they were held to a frustrating draw at the Brandywell.

It was a night of what-ifs for the Candystripes who can look back on several big moments as they reflect on another two points lost.

Alan Mannus was the star of the show for Rovers, as he guessed right to deny Patching in the first half and the Rovers goalkeeper was superb as Rovers frustrated the champions in a one-sided second half.

The Brandywell crowd were on their feet on 37 minutes when Will Patching’s corner went through a sea of bodies with everyone in the ground bar referee Paul McLaughlin spotting a handball. Fortunately for Derry, the assistant spotted it and informed the referee who pointed to the penalty spot. Unfortunately for Derry, it was the moment that Patching failed from 12 yards for the first rime in his City career, as his tame effort was easily saved by Alan Mannus.

City were undeterred by that, and roared on by a crowd which was now showing life, they almost opened the scoring spectacularly, with Mannus having to tip over Patrick McEleney’s volley from the edge of the area.

Rovers lost Graham Byrne to injury early in the second half, with Jack Byrne coming off an extremely loaded away bench as his replacement. It was the visitors who threatened first despite that loss, with Lyons feeding Kavanagh just inside the area, and his snapshot was well saved by Maher low to his right.

It was then City’s turn to make changes on 57 minutes, with James Akintunde and Michael Duffy replacing Declan Glass and Jamie McGonigle and the changes almost had an immediate impact.

City found himself three on two on the edge of the Rovers area, and Patching slipped Duffy through on goal, and his first-time finish, with his first touch, was headed to the bottom corner until a brilliant intervention from Mannus, who touched it past the post.

Derry City came even closer on 65 minutes when McEleney ride a challenge brilliantly in midfield and played Ryan Graydon in on goal. The winger fired the ball low past Mannus, who couldn’t reach it, but the ball struck the inside of the post and stayed out with McEleney’s follow-up blocked by a Rovers defender.

Ciaran Coll then came agonisingly close just four minutes from time, when he rose to meet Patching’s corner, but his downward header saw the ball just clear the post by inches with Mannus beaten.