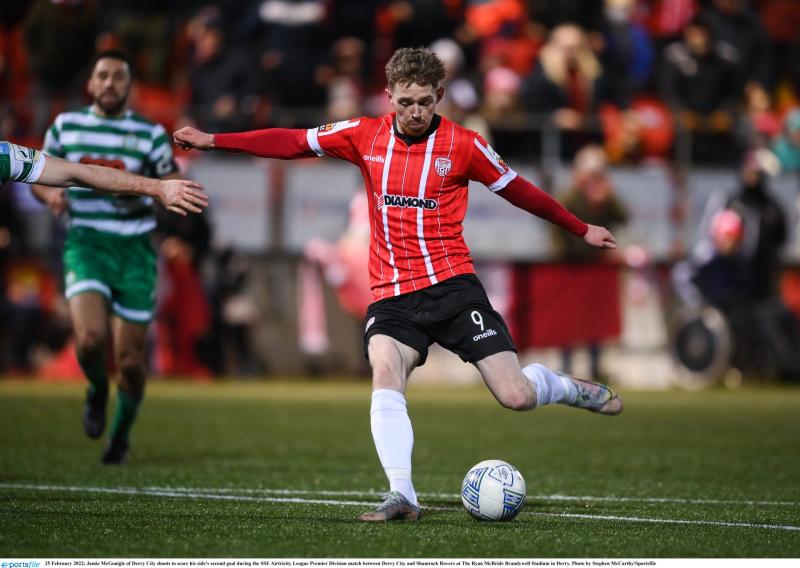 Jamie McGonigle scored a last minute winner against Shamrock Rovers at the Brandywell back in February.

All eyes are on the Brandywell tonight as Derry City aim to close the gap on champions Shamrock Rovers.

A win for City would put them five points behind Rovers with 11 league games remaining and would make things very interesting at the top of the Premier Division. Rovers, who will play 21 games in 87 days due to their European commitments will want to end any outside interest City may have in the title, but defeat would put them under increasing pressure.

Ruaidhri Higgins admits that while Rovers' heroics in Europe deserve acclaim, he is only interested in what is right for Derry City, hence his refusal to push tonight's game back a few days.
There have been calls for the Brandywell club to move the game back to Saturday evening or even Sunday given that Rovers played in North Macedonia on Tuesday night and have had just two days to prepare for the trip to Derry for a game that could have serious ramifications at the top of the Premier Division.
Rovers' created League of Ireland history by reaching the European Group Stages, following their  5-2 on aggregate win over Shkupi on Tuesday night - only the fourth time an Irish side has achieved such a feat. Stephen Bradley's men will now play against Hungarian champions Ferencvaros in the play-off round of the Europa League, and win or lose, Rovers will be guaranteed group stage football and a minimum of €3.3 million.
Higgins however has dismissed claims that Derry City are not accommodating Rovers as they face a packed schedule of 21 games in the next 3 months.
"I'm employed by Derry City Football Club and we all work for Derry City Football Club. We have to look after the best interests of the club," he insisted.
"I've said it before and I'll say it again; we flew to Riga, we came back and we were stuck in the airport for a couple of hours waiting on our bags. We then had to drive from Dublin to Derry then had to play a northwest derby two days later.
“There are similarities between what they have done and what we have had to do and no-one moved the game for us. I just think that Friday nights at quarter to eight is our home games and we want to keep that. It's nothing against Shamrock Rovers or nothing against the league, I think we have to do what's best for Derry City."
One positive aspect of Higgins' management is that Derry City are now able to compete regularly against the biggest teams in the league, something which the club went years without.
“This year against Shamrock Rovers, we won at home and we should have got at least a point at Tallaght, where we played really well, particularly for 70-odd minutes, and we didn't deserve to lose that game,” he recalled.
“We can compete with the top teams and hopefully there's evidence of that again on Friday."
Will Patching, who missed last week's game against Dundalk, remains a doubt for tonight's game.