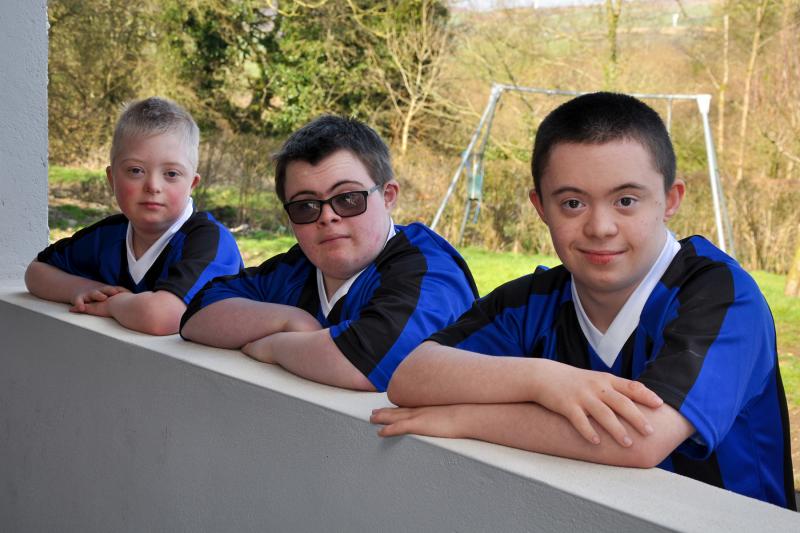 Kyle, Jack and Adam are ready for the Foyle Cup.

Oxford Bulls are gearing up for their third appearance at the O’Neills Foyle Cup, which returns this month after a three-year hiatus.

The Bulls, which is made up of children with Down Syndrome, is now in its seventh year and has become well-known within the city and wider communities.

The team will compete in the Sports with Disability section at this year’s Foyle Cup with Lurgan side Downs and Proud and Newry outfit Well Wane Warriors.

“They love taking part in the Foyle Cup and they love the parade as much as anything,” said Oxford Bulls founder Kevin Morrison.

“The whole thing is a fantastic opportunity for us to raise awareness around kids and young people with Down Syndrome. Our tagline is ‘Ability not Disability’ and we want people to see the ability our players have so we’re really, really looking forward to it.

“The parade also allows us to be out there as part of a mainstream football tournament and kitted out alongside thousands of other players. It’s a massive thing for our team and we’re extremely proud to be involved in it.”

Kevin’s son Adam has Down Syndrome and is one of the Bulls’ star players.

Kevin said: “Adam is addicted to football, he loves playing, training and watching games. But he loves the celebrity side of it as well! He enjoys waving to all the people during the parade and he gets a new haircut each time. One year he had a mohawk dyed blue and this year he’s got a ‘Macklemore’ haircut.

"I didn’t know what it was at first but he’s got it shaved at the sides and had to let it grow on top so he could comb it over!

“It wasn’t always that way, though. He would’ve always shied away from the limelight in the past but being part of the team has done wonders and really brought him out of his shell.”

The team trains twice a week and Kevin believes the standard is improving all the time. He also says that, like his son, the players have been able to develop their social skills through the opportunities made available at the club. The Oxford Bulls will feature in the Foyle Cup for the third time.

He explained: “In the past few months leading up to the Foyle Cup we’ve noticed the players are picking things up very quickly in training. We always try to give them the same experience that a typical team would get, and the players work very hard to improve themselves.

“When I started this team, I never envisaged we’d get this far this quickly. Along with the other parents we’re all incredibly proud. Some of the guys would have struggled socially but now this is not a problem for them at all, which is part of our aim. My belief as a parent of a child with Down Syndrome is that they just need opportunities to try things.”