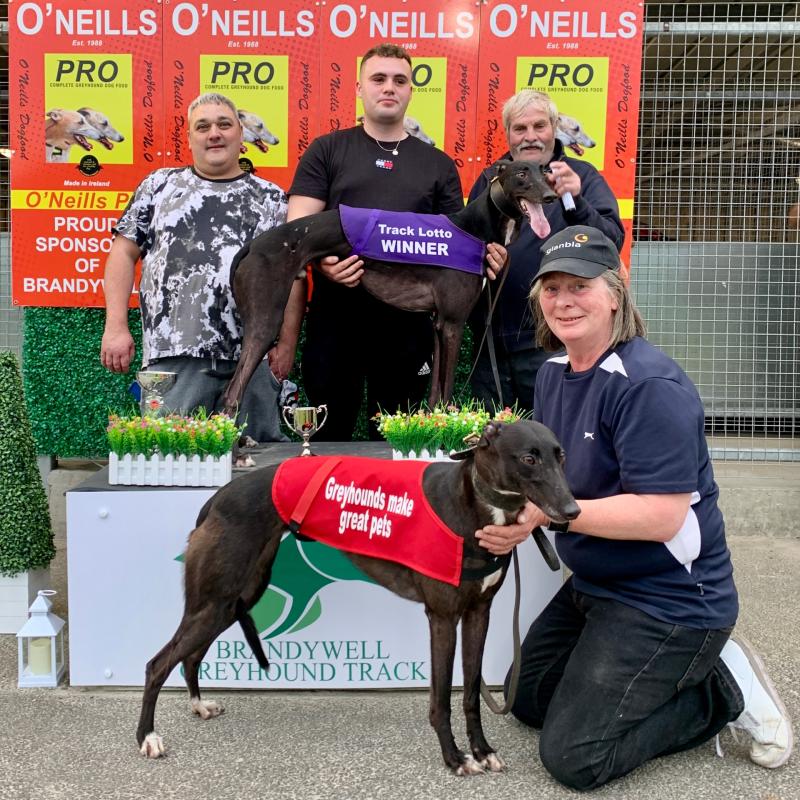 The feature race on Monday evening’s racing at Brandywell was the third race, the Runalong Ruby Retirement Trophy Race sponsored by Juliet Aldridge and Vincent McGuinness.

It was a double celebration for Ruby as she was celebrating both her retirement and her 5th birthday.

Runalong Ruby (Droopys Jet x Scotties Girl, Jul ’17) was bought as a present for Juliet by Vincent when she was just starting her racing career back in 2018. Juliet had owned Ruby’s dam Scotties Girl at a time and she had reached the final of the Longford Derby in 2013 so Juliet really wanted to have a little girl to carry on her legacy and Ruby was the perfect present.

But it wasn’t until 2019 that Ruby won her first race and she went on to have a sensational year winning 9 races and the title of ‘Bitch with most wins at Brandywell, 2019’.

Whilst still having a zest for the thrill of the chase and notching up 11 wins from her 49 races, Juliet decided to retire Ruby on her 5th birthday. We wish her a long and happy retirement at home with Juliet and Vincent.

As one career came to an end, it was rather fitting that the winner of the Runalong Ruby Retirement Race was a novice having his first ever race and what a terrific win it was to launch his career. Boherna Rio (Pat C Sabbath x Boherna Liz, Nov ’19) had two eye catching trials on his card, 29.48 in Kilkenny and 16.75 at Brandywell. 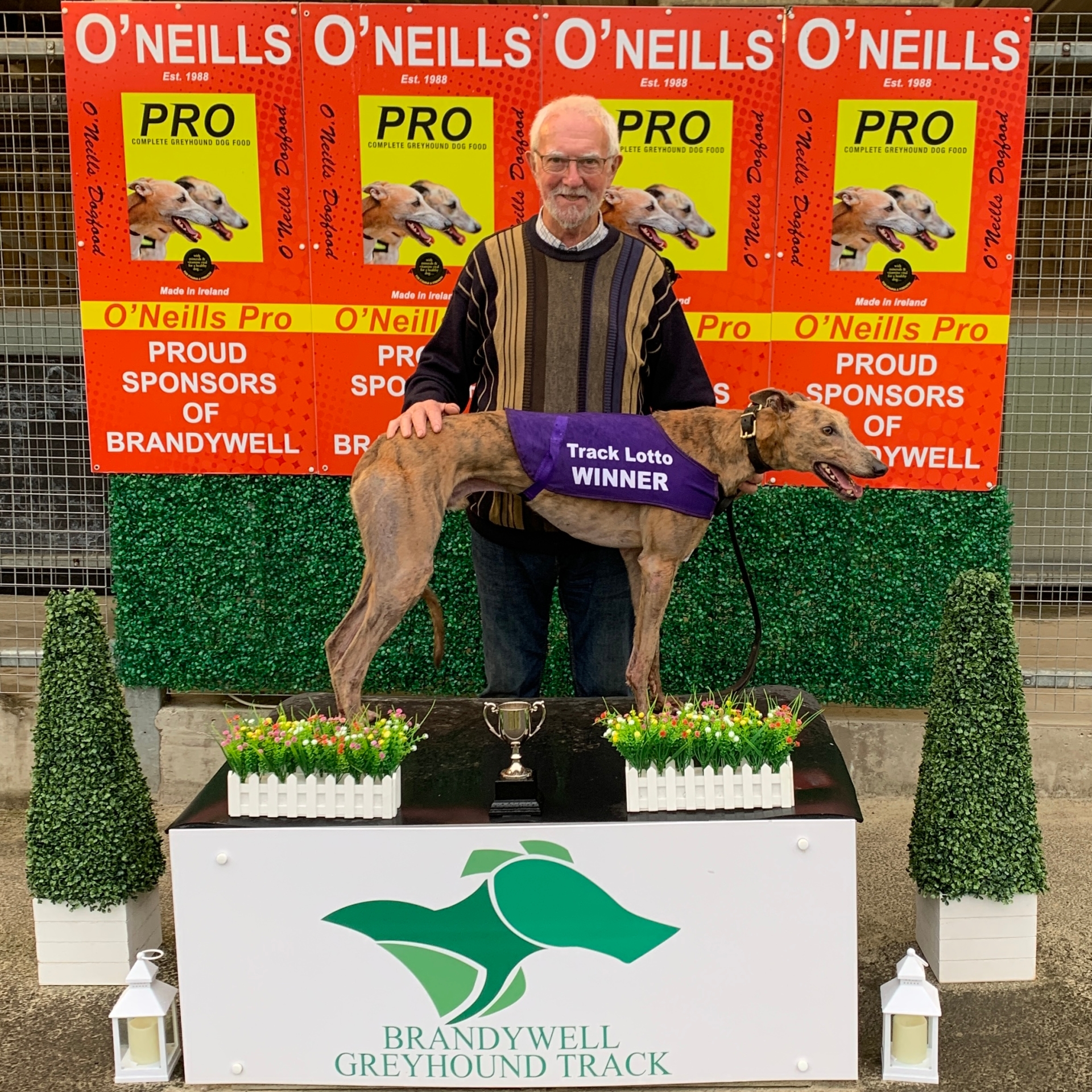 Rodger Hegarty with Deeneys Delight who won the fifth race.

Rio easily converted his promising trials into a whopping 10 length win from trap 1 in 16.82 for his owners Charles Coyle and Hugh Harley. And if Rio follows in Ruby’s paw prints, then plenty more wins are sure to follow.

The Greyhound Data Sprint was the first race on Monday’s programme and it was won by Shrewd Sapphire (Droopys Sydney x Shrewd Clover, Dec ’20) for Ryan McFlynn in 17.04. Sapphire, racing from trap 2, had approximately 3 lengths to make up on the early leader Tullys Best as they emerged from the second bend but she ran on strongly up the outside of Best on the home straight to seal the victory by a short head.

Sapphire shares the same dam as super sprinter Shrewd Call who had held the sprint track record in Towcester and won the 2020 Silver Salver at Central Park so she has big boots to fill. There will be plenty of interest in her career going forward given her excellent pedigree.

Adrian McGarry’s new recruit Ring The Best (Ballymac Best x Ring Percilla, Dec ’20) won the second race in 17.14 and got her first career success on only her third start. Racing from trap 3, she won by 3.5 lengths from Old Ford Vegas. Best is the first pup from this young 2020 litter of Ring Percilla’s to land a victory and should progress well with age and experience.

The fourth race was won by Oliver Canavan’s Ardfert Spark (Kinloch Brae x Carmac Luna, Jul ’20) in 29.33 for the 525 yards. Despite being slow away from trap 1, he showed good pace to take up the lead, running on well to hold off the late challenge of Do It Stevie by 1.5 lengths.

Spark had 3 wins in Tralee on his card before moving to Oliver’s kennels and this is his first win on the Brandywell circuit on his fourth attempt. He also won the bag of O’Neill’s dog food which was sponsored by Andrew O’Neill.

Deeneys Delight (Droopys Roddick x Burma Milly, Jan ’20) was paw perfect when landing the fifth race which was also over 525 yards in 29.59 for Rodger Hegarty. Evenly away from trap 1, he made the most of his inside advantage on the run to the first bend and ran on well to hold off Rusty The Red who was staying on up the home straight. Deeney has a good strike rate now of 4 wins from 16 races. 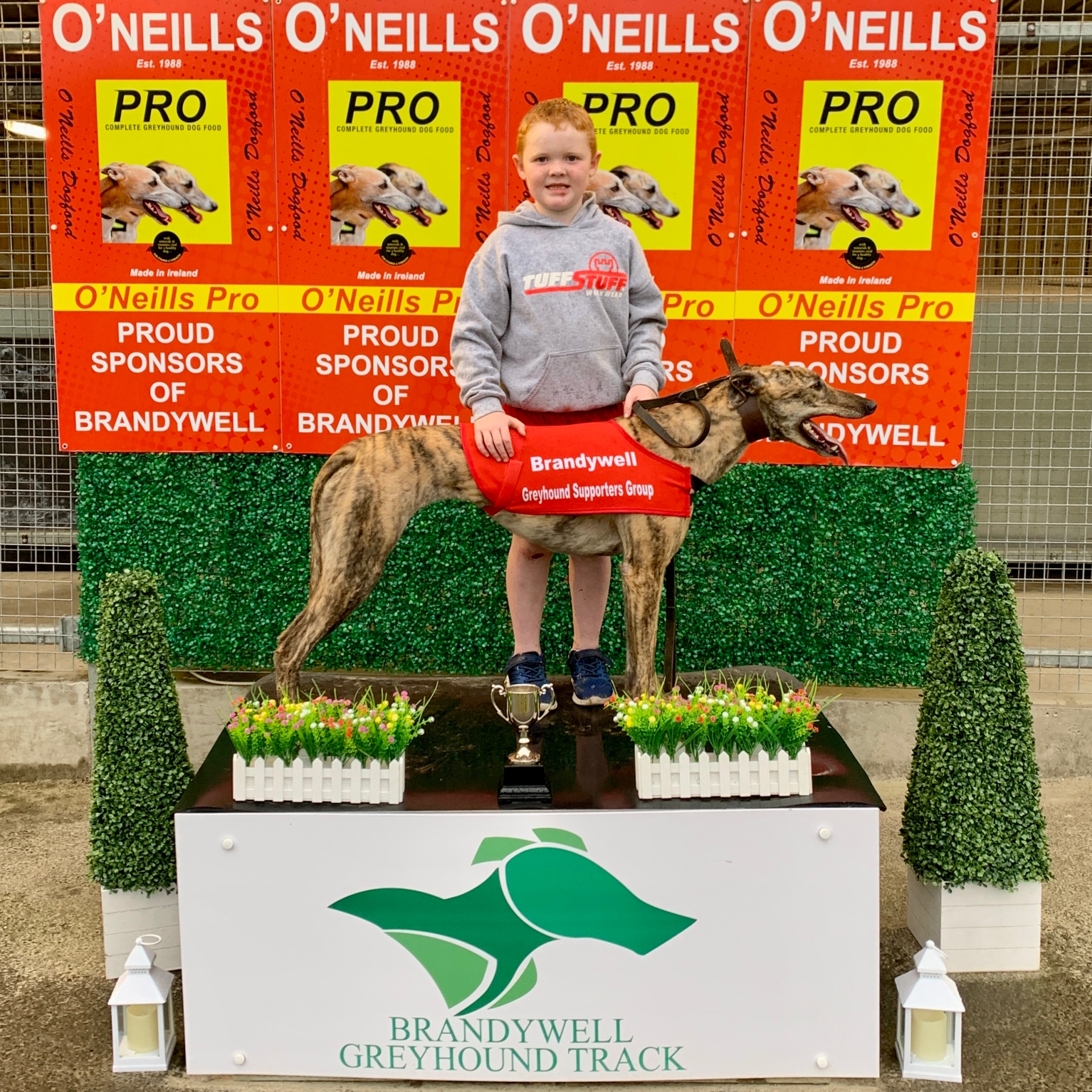 Enda O’Goan with Bashful Jess who won the sixth race.

Racing from trap 1, she had ground to make up on the early leaders but she relished the test of stamina over the 500 yards and ran on well to win by 4.5 lengths from Rahyvira Spice in 28.27. This was her first career success on her sixth attempt and she is open to more improvement with age and experience.

The last race saw Juliet Aldridge and Vincent McGuinness’s Snipe Drum (Laughil Blake x Colorado April, Jun ’20) stamp his authority as a sprinter when stepping back in distance after some good runs over 500 yards.

A noted fast trapper, he maintained his reputation by exiting the 2 box smartly and despite strong competition from Cillians Jet, he clocked 16.74 which was the fastest time of the night. Although Runalong Ruby has retired, this young dog looks like he will notch up many more wins for Juliet and Vincent kennels. He currently ranks joint second in this year’s Brandywell league table for ‘Dog with most wins’.

The prestigious Dundalk International annual greyhound race meeting took place on Tuesday night with some notable performances from dogs we have seen at Brandywell.

Raymond Hamilton Jnr from Derry City won the Boylesports Derby Trial Stake over 550 yards with Gaytime Nina (Droopys Sydney x Gaytime Derval, Jul ’20) in 30.00 and she is another very useful recruit to his kennel alongside Droopys Nextone who was third in the Irish Oaks recently. Nina had recorded 16.73 in a trial over the 300 yards at Brandywell prior to her victory on Tuesday.

Duggies Elle (Droopys Sydney x Lithuanian Paula, Sept ’19) won the Avenue Inn & Off Sales A1 575 yards in 31.13 for Catherine Callaghan. Elle was runner up in the 2021 TT Thermal Insulation Contractors & Magical Bale Oaks at Brandywell behind Canada Goose who broke the track record in the final. Hopefully we will see Elle back at Brandywell contesting the Oaks again in August. 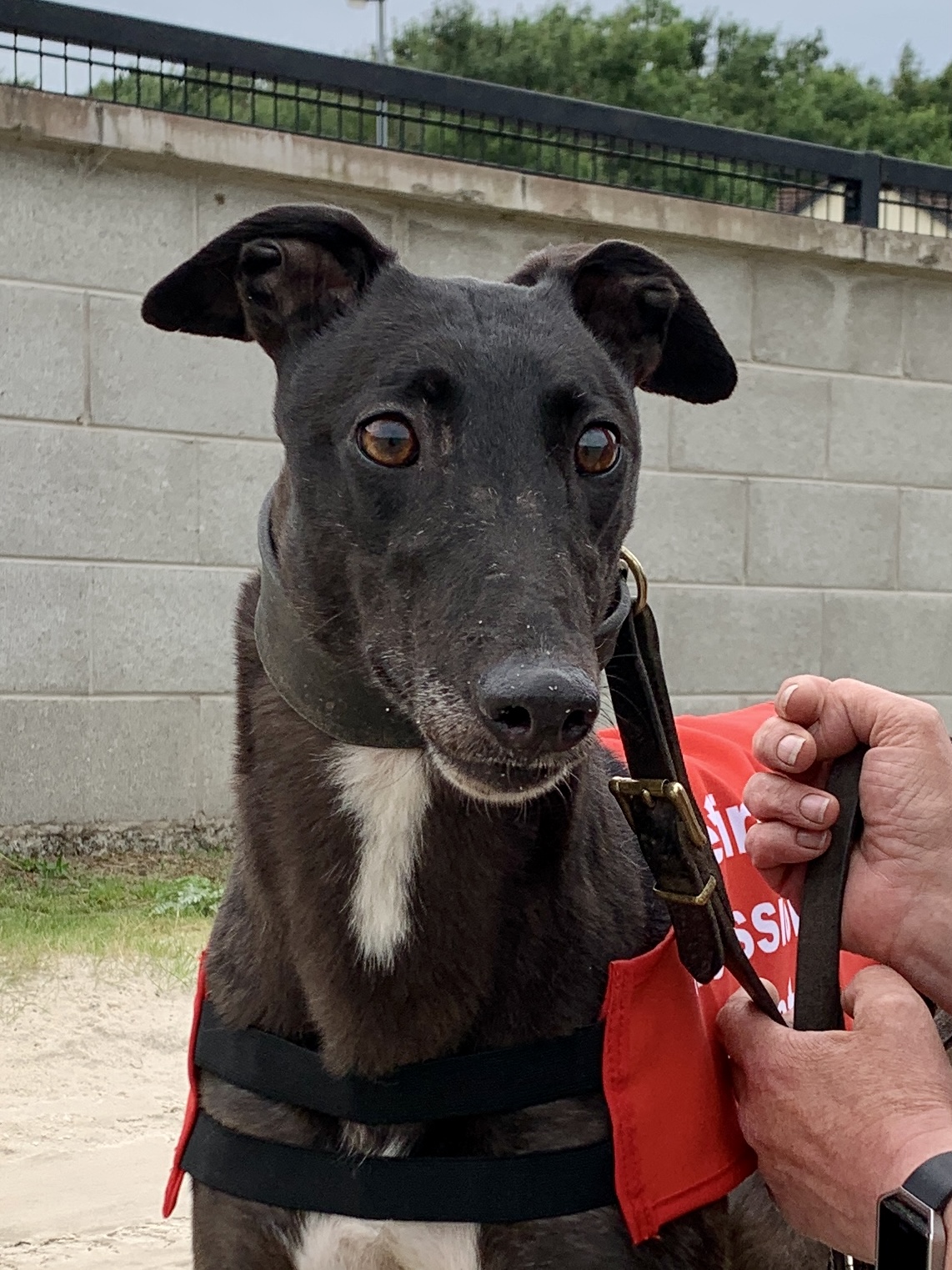 Runalong Ruby who was celebrating her retirement and 5th birthday at Brandywell.

The Dorotas Wildcat at Stud Open 900 carried a €1,000 first prize and was won by Nigel McGarry’s, Flying Honours (Ballymac Eske x Designer, Apr ’20) in 49.87. This dog won his previous race at Brandywell a fortnight ago and his ‘turbo charged finish’ had been noted over the 700 yards. We repeat what we printed 2 weeks ago.

‘Flying Honours is a very exciting marathon dog that has emerged on the scene and since Nigel is no stranger to travelling hundreds of miles with his greyhounds, we can expect to see this lad take part in marathon events around Ireland. He is one to watch for when the Shelbourne Marathon starts in December.’

His thrilling finish on Tuesday against the top class Roxholme Kirstof over the 900 yards at Dundalk puts him amongst the ranks of the best marathon dogs currently on the scene.