'We will enjoy it every step of the way' 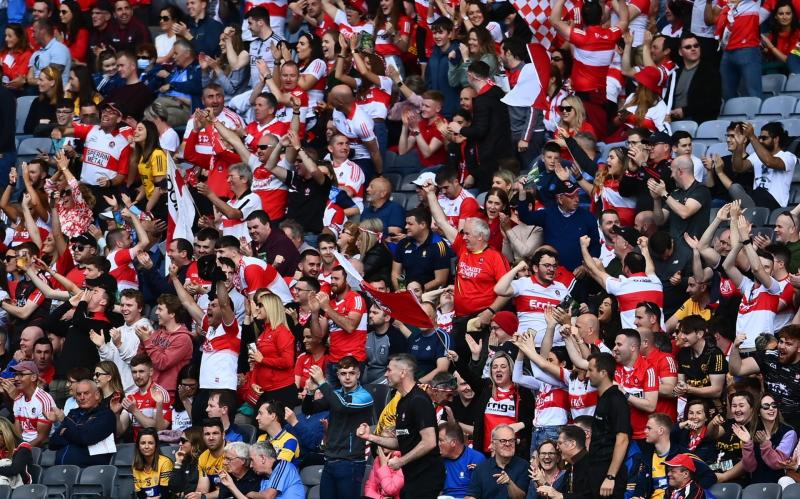 Every day out might feel like the greatest one ever for Derry fans at the minute, but Rory Gallagher is a man who harbours much more ambitions for his Oakleaf side.

A greater coach on the island you would struggle to find right now. He has a squad hanging on his every word, with total commitment and faith in his process.

Now, Gallagher will prepare to lead his side into the final four of the All-Ireland series and a second meeting of the season with Galway.

While this stage may not quite be unfamiliar territory for him, it certainly is for the men he is looking around at in the changing room.

Saturday’s meeting with Clare had potential banana skin written all over it.

The first time that Derry were favourites in this year’s championship run, against a team they had already beaten by nine points earlier in the year.

Avoiding any semblance of complacency was the key. And they executed the game plan perfectly.

“It’s a long way from the early season and you’re into the really enjoyable part for players and supporters, but the ground work has to be done and thankfully we scored early on and we opened up the game,” stated Gallagher.

“To be honest, we had a good idea of Clare’s gameplan to keep the thing very tight and conservative and they set their stall out conceding the kickouts so we wanted to open the game out as early as possible.

“We missed a number of point chances. We took the goals early on very well and it left Clare having to change tact which didn’t suit the way they wanted to go about it.”

He continued: “We went out to open up the game quite early and you knew to do that you’re going to leave a bit of leakiness.
“We didn’t want to be cautious in our approach because we felt that would play into Clare’s hands massively if we were overly cautious.

“Look, were we happy with the couple of goal opportunities we conceded? Absolutely not, but I suppose we substituted that with dominating an awful lot of the ball.”

Following Derry’s impressive run to the Anglo-Celt, attentions and media commentary started to turn to how their game would fare on the wider spaces of the Croke Park pitch. While Gallagher might not necessarily have agreed with some of the content and reasoning, he did admit that his side’s experiences on the hallowed turf are fewer and farther between than those left around them.

“Every day you’re questioning. You have to go out and prove it. Dublin are being questioned at the minute despite some of them having seven or eight All-Irelands. Today we proved we can score, but the next day we have to prove the same.” 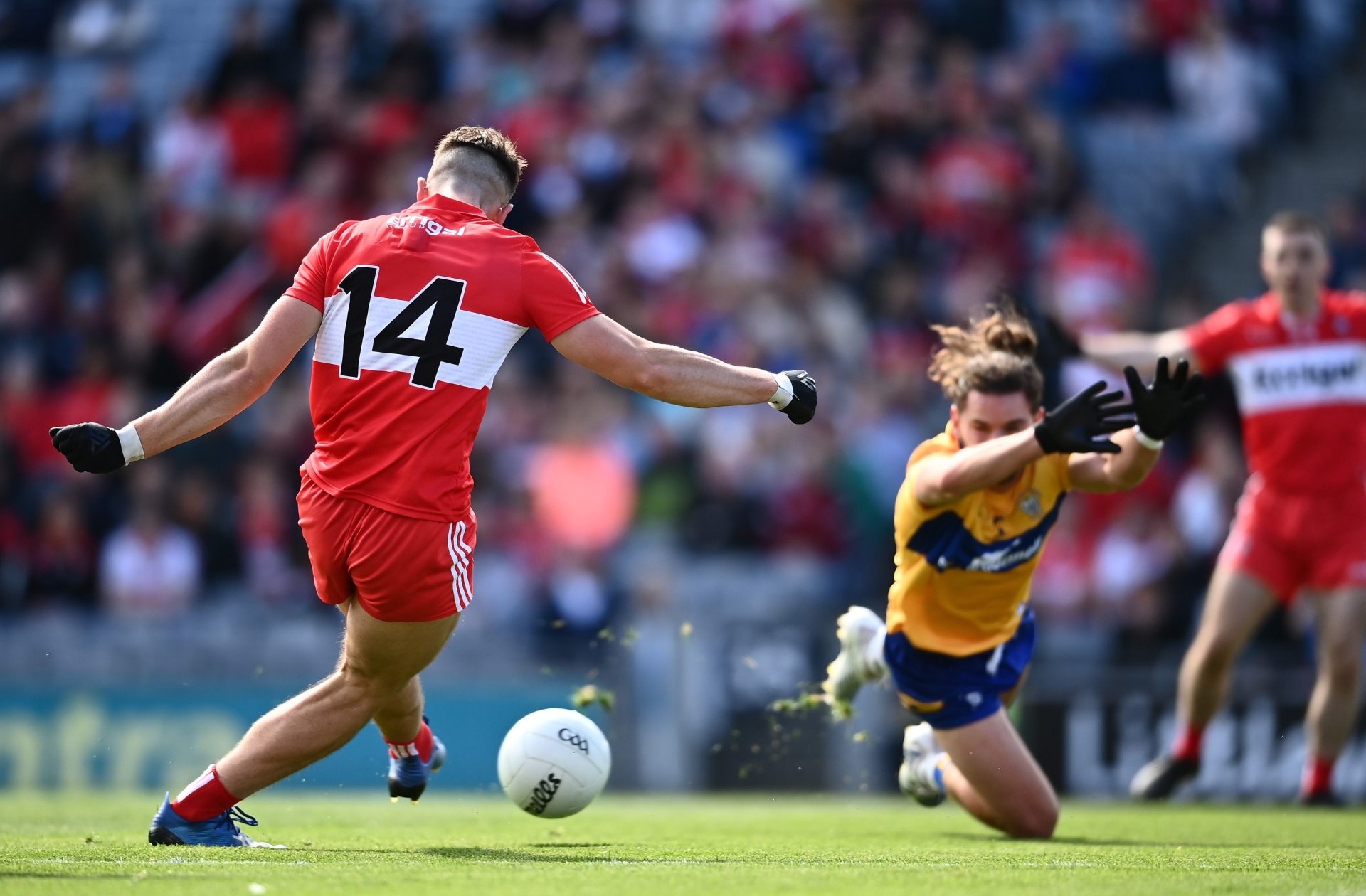 Looking from the outside in, any team scoring five goals in an All-Ireland quarter-final has something to shout about. After letting Clare back into the game slightly in the first half, Gallagher said they put on the afterburners and called on their ruthless streak to put the Banner to the sword – doing so with some superb finishes as well.

“Probably we became a wee bit nonchalant and a bit too much of a shoot-out from a defensive point of view once we got the second goal. We left a few gaps that we wouldn’t be happy with, but it was a great response and great quality. It’s great to see that quality coming through and that ruthlessness and what I would call devastating brilliance from individuals,” he admitted.

“They were really impressive moves and I thought we offered up a very simple philosophy of rewarding the man in the best position. Sometimes we make mistakes and there were some wee errors but that's natural. We have some serious quality players and when they get those opportunities they should show it so I am delighted for them on a personal level but also as a collective.”

Derry’s desire to get right into the face of their opponents was summed up by how often they packed their full-forward line, sometimes with up to five bodies standing across the pitch in front of Clare goalkeeper Tristan O’Callaghan.

"The players do that at times. They see the way Clare are going to set up and where we might be able to get some spaces,” said Gallagher. “Some players, if they feel they are not involved in the play, might feel they can get in there. For the third goal, I can't actually recall how many we had inside, but you work on different things and some days they come off and some days they don't.”

Despite being comfortable from the word go on Saturday, right to the very final shrill of Martin McNally’s whistle the Derry players, and their manager, were looking around the pitch demanding more of themselves and of one another. It sums up their mentality.

"Look, they are very smart fellas. They are very well educated from a sporting and a football point of view thanks to their families, their clubs and their schools. The fact that we are all together now means it's very enjoyable coaching and you can see the way they can coach each other on the team. At the end of the day, they have to manage the team on the pitch,” he concluded.

The win over Clare was the latest milestone in a special season for the Oakleaf county, after they defied all odds to win the Ulster championship. Now, a second meeting of the year with Galway awaits after they put an end to Armagh at the weekend in a dramatic penalty shoot-out. The journey continues.

“They have come a massively long way to people on the outside, but once myself and the management team got our teeth into it we knew we had a lot of good quality. Yes, it is a big leap, but it is also from our point of view about fulfilling your potential and our aim is to try and get the most out of ourselves and to enjoy it every step of the way,” explained Gallagher.

“Part of that will be when things don't go your way or games don't go your way. We bounced back from a very bad day in Owenbeg against Galway and we responded well. There will be ups and downs but it we'll enjoy the ride as best we can.

“Galway, while they haven’t been maybe one of the heavyweight teams in the sense, they’ve been in Division One, apart from this year, for the last four or five years and have been in All-Ireland semi-finals and National League finals, so it’ll be a big step up.”

Saturday’s meeting with the Banner was the second time that the sides have done battle this year, after Derry were victorious in Ennis in February in their Division Two encounter. For Gallagher, it has been a long and prosperous journey since then, but there is more to come.

“The league meeting was I think five weeks after Slaughtneil had been playing in an All-Ireland semi-final. The Glen players all had wee niggles when they returned and with the step up in training from club to county, our preparation wasn’t good but at the same time we showed enough quality down there to win the game,” recalled the manager.

“Look we’ve enjoyed our period since we’ve had everybody available from the break in the league really. We felt we’ve built. We’ve been far from perfect but we’ve done an awful lot right. The thing is we have to improve massively going into the next game because, hand on heart, with all due respect to Clare, they haven’t been in the latter stages. It’ll be a big step up.”