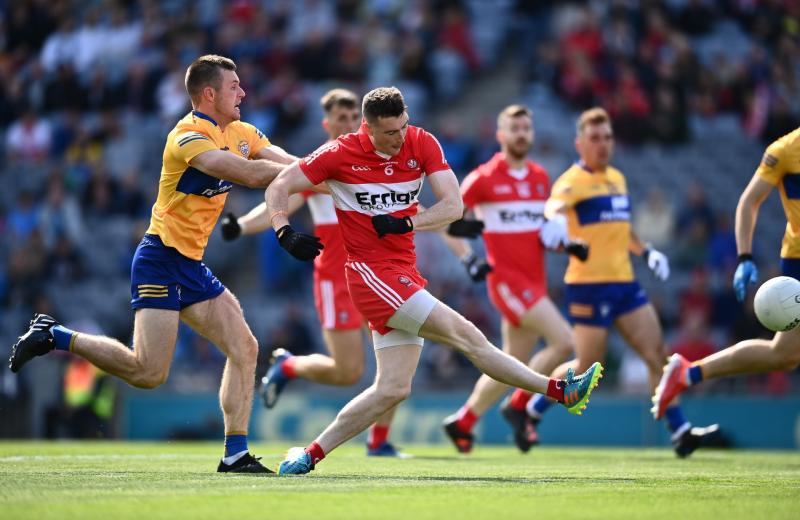 It’s been a long time since 2004. A lot has happened since August 29, 18 years ago when Derry missed out on a place in the All-Ireland final at the hands of the Kingdom of Kerry.

But now, as has been the case many times already in this championship campaign, another wait is over.

On July 9, the Oakleaf will be back in the final four of the most elite competition in Gaelic football.

That was thanks to a measured, controlled and comfortable performance against Clare in Croke Park on Saturday.

It was a game that was all but over with 15 minutes gone. After upsetting the odds throughout their Ulster run, Derry were favourites for the first time, but they more than lived up to it.

That collective spirit and willingness to work for one another, for their manager, and for their supporters was there once again. This group are special, and now we wait to see how far they can go.

As Martin McNally threw the ball in, things started to take shape, with the most notable observation seeing Brendan Rogers partnering Conor Glass in the midfield following his exploits against Donegal's Michael Murphy in the Ulster final.

As expected, Chrissy McKaigue was tasked with the man marking job on Keelan Sexton (and performed it quite well given Sexton was taken off after 53 minutes with no scores), with the impressive Conor McCluskey on Aaron Griffin.

Paul Cassidy and Ethan Doherty were their usual hard working, hard running selves, with Cillian Brennan the man given the enviable task of marking Shane McGuigan.

The Nialls – Toner and Loughlin - and Benny Heron provided further width for the Oakleaf when they needed it and limited the runs of wing-backs Cian O’Dea and Jamie Malone.

After early wides for both teams, it was Rory Gallagher’s men who opened the scoring after six minutes when Niall Loughlin popped over a 20 metre free from the left side.

The first goal came three minutes later when a short kick-out from Tristan O’Callaghan was over the head of Cathal O’Connor, and Shea Downey picked up the scraps. He fed Ethan Doherty who picked out Benny Heron for the hammered finish.

It got even better on 13 minutes when Conor Doherty launched an attack from inside his own half and played McCluskey in down the left. He found Glass who played the one-two off Ethan Doherty before rifling home.

An Eoin Cleary free, after Glass was penalised for a high tackle on Cian O’Dea, got Clare off the mark with 16 on the clock, but Derry answered back with their only score of the game that wasn’t from play – a free from McGuigan after McKinless was brought down from behind by Lillis. 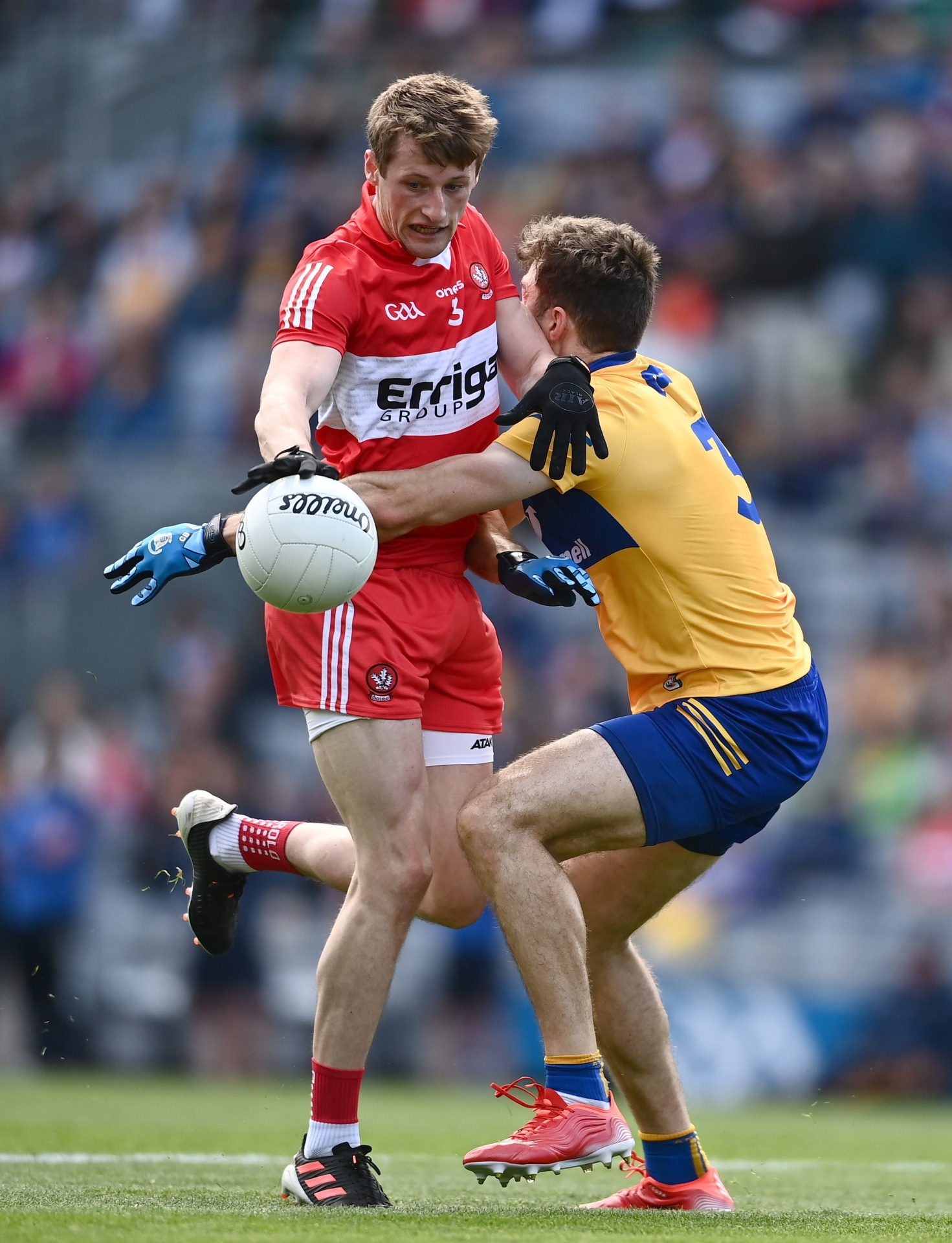 Brendan Rogers of Derry in action against Cillian Brennan of Clare during the GAA Football All-Ireland Senior Championship Quarter-Final match between Clare and Derry at Croke Park, Dublin. Photo by David Fitzgerald/Sportsfile

The Banner were already trying hopeful balls over the Derry defence, and on 23 minutes one almost paid off when Malone fisted it over for Collins in a footrace with Heron. Downey came across but didn’t win the ball, and Collins found himself through – but Odhran Lynch made the save low to his right.

A monstrous point from Glass came in between two McGuigan scores that made it 2-5 to 0-1 but Clare finally got that long-awaited second score on 31 minutes when Malone was left unmarked to curl over from just inside the ’45,' much to the frustration of Conor Doherty who beat the Croke Park turf.

McGuigan ghosted away from Cleary to split the sticks again but Clare got some hope on 33 minutes when a Collins hand pass over the top saw Ciarán Russell set up Pearse Lillis on the edge of the square for an emphatic finish.

A Cleary point from 45 metres kept the momentum with the Banner, but it was the Oakleaf who had the final say of the half when Rogers and McGuigan were both involved in setting up Paul Cassidy for an absolute rocket of a finish to the top left corner of O’Callaghan’s net.

The second-half began with a Niall Loughlin shot for goal deflecting just wide of the left post and, at the other end, after Collins was initially bottled up 40 metres out, the ball somehow spilled through for the unmarked Cleary, but Shea Downey was there to make a massive and important block.

Derry had a fourth goal on 40 minutes when McKinless picked up possession just inside the ’45' and rode a shoulder tackle before slaloming into the space and finishing to the net, despite the attempts of O’Dea on the line – 4-6 to 1-3.

A Heron point extended the lead before a Malone effort was cancelled out due to a foul by Darren O’Neill on McKinless in the build-up.

Rogers and Glass were both involved in the middle third on 45 minutes before setting up McCluskey who went haring into the space again down the wing, and the Magherafelt man added the finish. Conor Glass showed his defensive qualities then as he made a big block on a Russell shot, though Clare did have the ball in the net on 48 minutes.

After Keelan Sexton initially won possession, the ball bounced off McKinless into the path of Cleary, with Lynch advancing off his line. The Clare captain spotted the opportunity and cushioned the ball to the bottom corner – 4-8 to 2-3.

But such was Derry’s dominance they wouldn’t let their opponents have even a little bit of hope. Seconds later McCluskey advanced forward again and this time set up McGuigan to drive it low under O’Callaghan to the net for a fifth Oakleaf major.

Paul Cassidy and Cleary (2) exchanged scores before Shane McGuigan added another to his growing tally with a point from the edge of the D.

A close range Tubridy free off the floor was followed by Cleary skipping away from McGrogan and slotting over.

As the game ticked into the final ten minutes, Glass and Rogers were both involved before McGuigan raised a white flag, and Derry continued their defensive determination when Ethan Doherty got a hand in to strip Lillis of the ball as he broke along the byline. 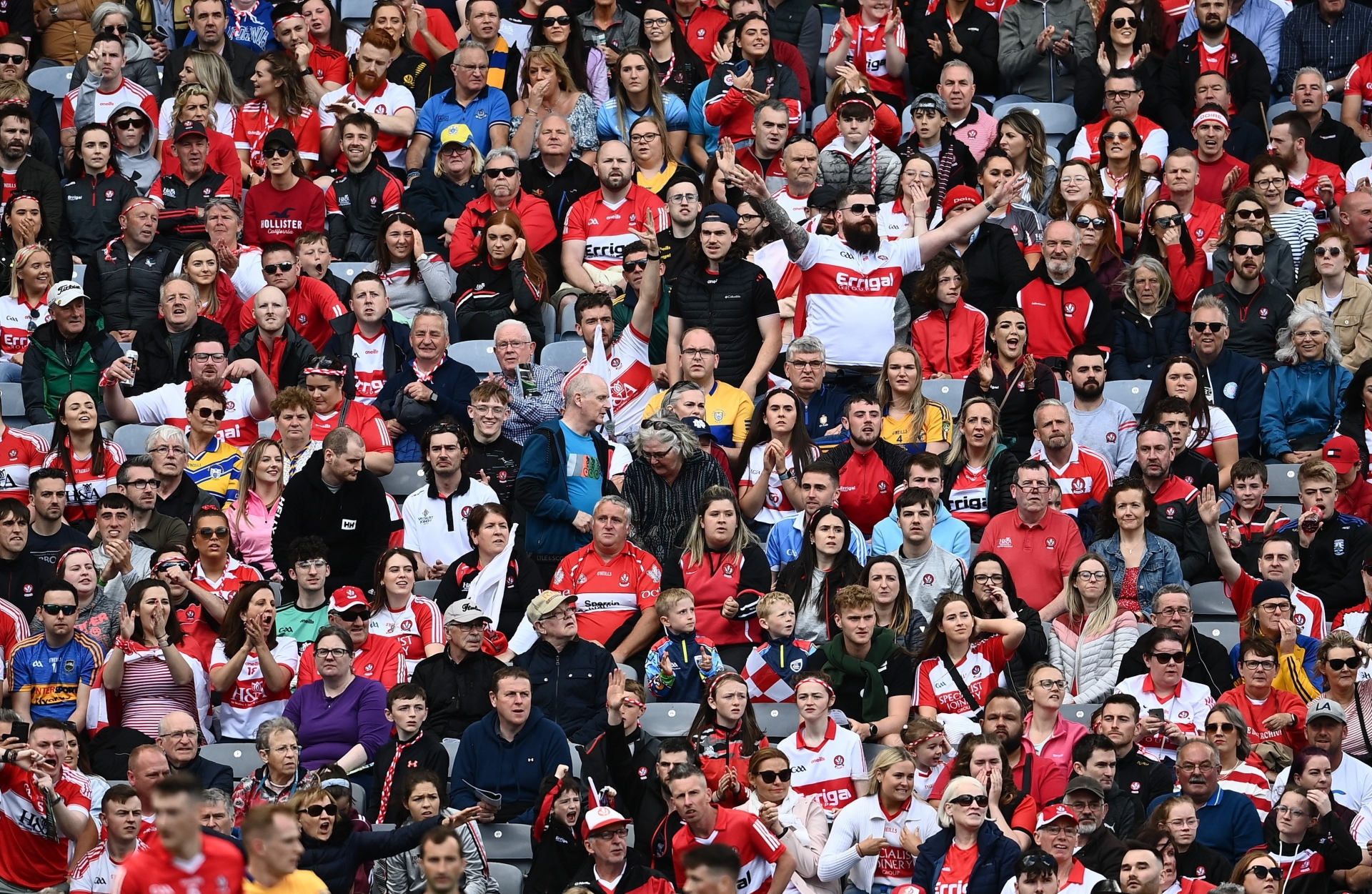 An Emmett Bradley free then picked out Niall Toner, who had gotten away from Manus Doherty well, and it was Lavey to Slaughtneil as he picked out McGuigan for the point. The marquee forward took his tally to 1-8 when Toner this time played a long ball into him, 40 metres out, and he opted to go for the posts again.

Rogers rose highest in his own square to claim a high ball ahead of O’Neill with three minutes remaining, before Turbridy rounded off the scoring with a free. But there was no doubting that this was Derry’s day.

MAN OF THE MATCH - Conor McCluskey - Conor Glass was superb for Derry, Shane McGuigan tallied 1-8, but one of the unsung heroes was Conor McCluskey. He provided width down the wing time and again, and was at the heart of what Derry did well in both attack and defence.

TURNING POINT - Glass goal - It took a while for Derry to come to a boil in Ennis back in February, but there was no such waiting here. When Conor Glass blasted the ball to the net after 13 minutes the game was all but over at 2-1 to no score.

SCORE OF THE GAME - Cassidy goal - Derry’s three first half goals were sensational and Gareth McKinless’ solo effort typified his season, but Paul Cassidy’s was the pick of the bunch purely for the finish. Top corner, right in the stanchion. Beautiful.