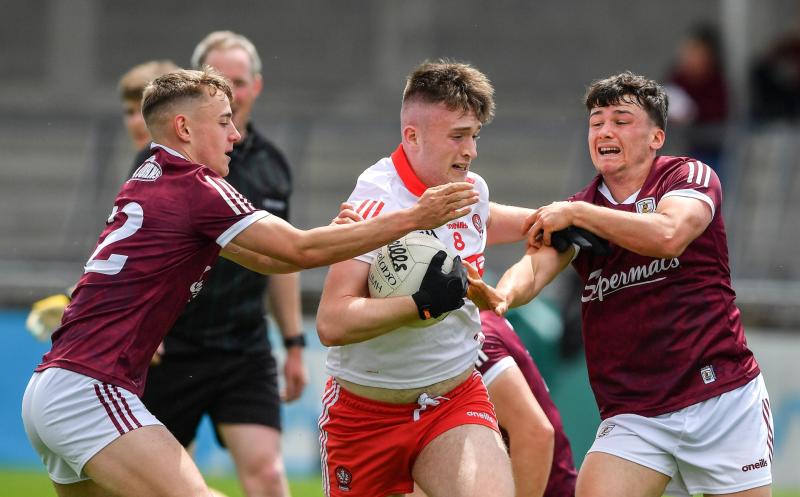 Dara McPeak of Derry in action against Stephen Curley, left, and Tomás Farting of Galway. Photo by Ray McManus/Sportsfile

Sometimes fortune doesn’t always favour the brave as Derry minors bowed out of the All-Ireland series despite a late rally.

Derry played second fiddle for 50 minutes and trailed 2-9 to 1-5 before hitting six unanswered points to leave them within striking distance of extra-time.

After Johnny McGuckian was dismissed on a second booking, Derry goalkeeper Ben O’Connor pushed up even more to join the attack and he linked up in a move that led to a Ciaran Chambers point.

There was a greater sense of urgency and Derry were on top, but the clock wasn’t their friend.

With the four minutes of stoppage time been and gone, O’Connor played a pass to substitute Antain Donnelly. There was no more time. With Derry trailing by a point, he had to pull the trigger, but his effort went across goal and wide. And with it went Derry’s last chance.

It would’ve been unfair on a Galway team who came with a level of hunger and aggression Derry took to their Cork battle in Portlaoise.

Éanna Monaghan and Colm Costello landed 1-8 between them, but it was Galway’s throttle and precision in the tackle that forced turnovers across the pitch.

Cillian Trayers made a fine tackle as Odhran Murphy galloped towards goal in the first half. Tomás Farthing made a similar intervention after half-time that led to Colm Costello’s game changing goal in the 32nd minute.

Derry didn’t have the crisp support play that stood them in good stead for much of the season. With any delay, a maroon arm stripped them of possession.   Galway stamped their authority as early as the third minute. After a series of failed attacks at the other end, Tomás Farthing got his hands on the ball. After weaving through the Derry defence, he offloaded to Jack Lonergan who stepped onto his left foot to slot to the net for the game’s opening score.

Galway threatened a second goal, but Ross Coen overhit his pass to Stephen Curley. Seán Dunne and Curly combined to place Monaghan for a score before Ciaran Chambers replied with Derry’s first score of the game in the tenth minute after a pass from Johnny McGuckian.

Derry had sufficient possession, but were wasteful and Galway were more composed on the ball. Costello cut in to score a second Galway point before converting a free and the westerners were 1-3 to 0-1 ahead by the 22nd minute.

Galway needed a well-timed Cillian Trayers tackle to prevent Odhran Murphy from ducking in on goal after Ruairi Forbes’ pass found him inside the cover after a Danny McDermott turnover up the wing.

That was the story of the game. An incessant Galway press and when a Costello free dropped short it wasn’t cleared and Shay McGlinchey kicked the Tribesmen further ahead.

Derry got a lifeline when Gilmore’s short kick-out was overturned by Eoin Higgins. Galway regrouped momentarily, but when Odhran Crozier’s perfect pass picked out Conall Higgins, Derry were inside. Murphy passed the ball to Eoin Higgins who was cool enough to settle before hammering unceremoniously to the top corner. 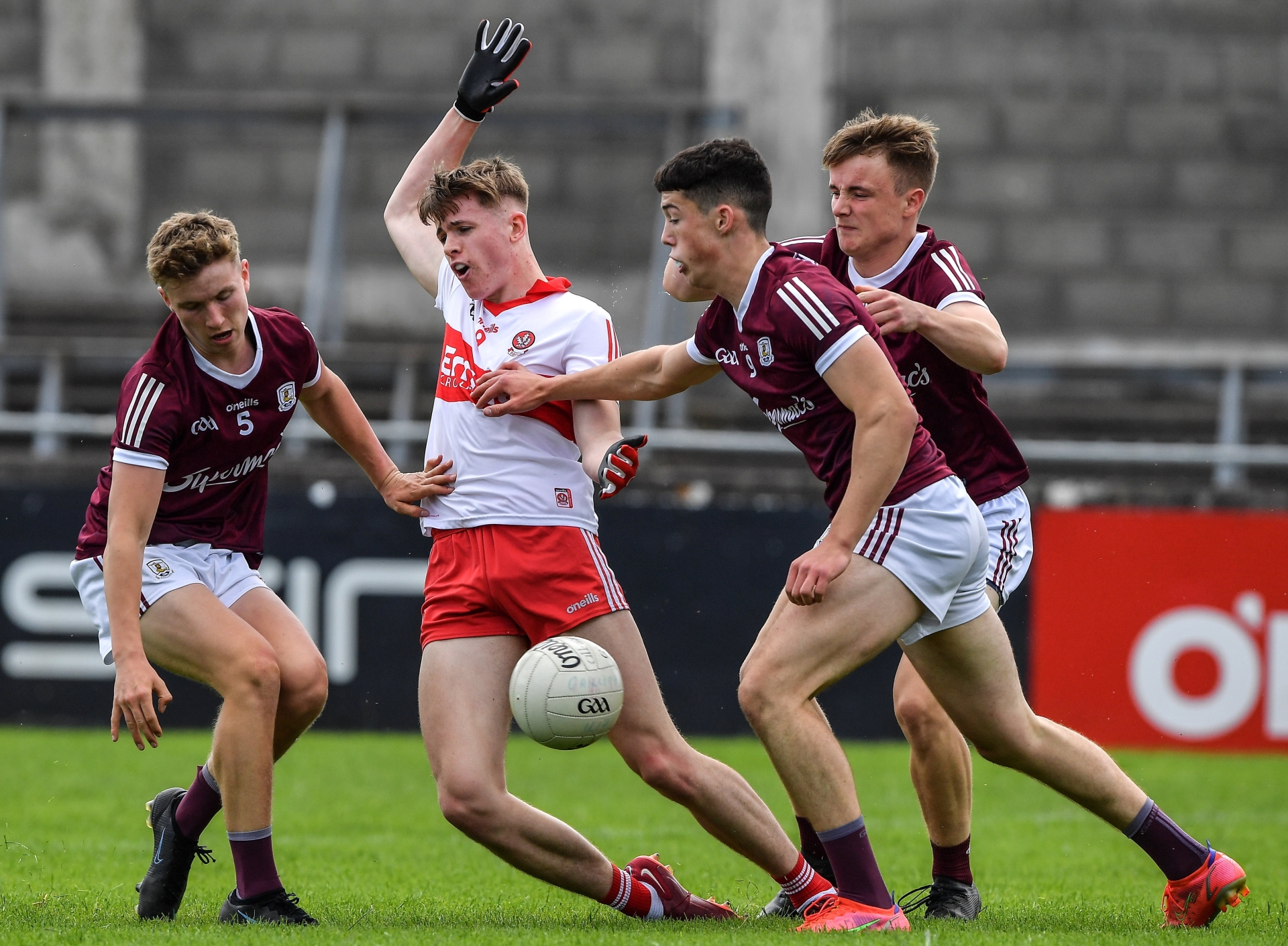 Galway lost their next kick-out and by half-time they were reduced to 14 players when McGlinchey was black carded for a body check on Danny McDermott.

They may have had a man less, but Galway were positive after the restart, but registered two wides.

Derry had another half chance for goal closed out with Farthing’s tackle on Cahir Spiers. Derry were able to the stop in the midfield area with a foul, but Cillian Trayers’ pass over the top put Costello in the clear behind Eoin Scullion and he fired across the goalkeeper to the far post.

It was the start Derry needed and it was looking bleak. Costello added a free before Forbes fired over a point on the run, as he carried the fight to Galway.

It was point for point for a spell in the middle of the second half before two Chambers points cut the gap to five points, 2-6 to 1-4, after 40 minutes.  Derry did have chances, but were guilty of dropping the hall into goalkeeper Gilmore and Crozier’s wasn’t able to find the range from his frees.

To their credit, Derry stuck to their guns but it was always a struggle.  Monaghan dropped a long-range shot over the bar as part of the winners’ controlled spell.

It was always the flair card they played. Galway were throwing their bodies on the line. On one occasion the break bounced for Derry when Johnny McGuckian’s blocked shot spun over the bar.

Conor Downey was then on target before Spiers left two balls shot short into Gilmore’s arms. And still Derry were coming on the charge. Ben O’Connor and James Murray combined for a sweet Spiers point. When Antain Donnelly won the Galway kick-out, Derry’s belief began to seep in.

A Chambers free left a goal between the sides, 2-9 to 1-9. Donnelly and Fionn McEldowney forced a turnover that led to another Forbes run and a Derry free that Chambers slotted over.

All of a sudden it was a two-point game at 2-9 to 1-10. Next up, it was Conor Coyle who got hands on a breaking ball from a Galway kick-out and Forbes’ pass set up a score of Chambers.

There was a sense of extra-time on the Derry players’ faces and Galway were clambering looking for any sort of possession to take the sting out go the game.

Derry did have their chance, but when Donnelly’s shot drifted wide it signalled Derry’s last chance.

MAN OF THE MATCH - Colm Costello - A Forbes-inspired Derry rallied well in the last 10 minutes, but all the main contenders were in maroon. Jack Lonergan had a strong influence around the middle and Galway were collectively sound in defence. In attack, it was Colm Costello who kicked 1-4 including his side’s game clinching second goal.

TURNING POINT - Costello goal - Derry were well-placed at half time. After a shaky start, Eoin Higgins’ goal cut the margin to three points at the break. With Shay McGlinchey in the sin bin, Derry had a had a chance to get a foothold in the game, but when Cillian Trayers’ pass found Colm Costello, he cut inside Eoin Scullion before shooting Derry into a 2-4 to 1-1 lead after 32 minutes.

SCORE OF THE GAME - Monaghan point - Galway were on the march to a seven-point lead and it was Éanna Monaghan’s floating effort dropping over the bar that was the pick of the scores.