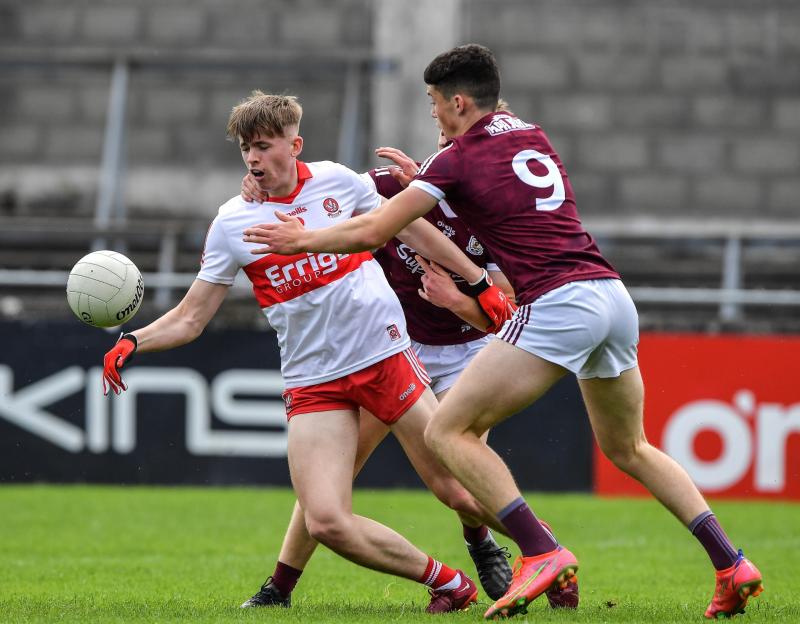 Ruarí Forbes of Derry in action against Shay McGlinchey of Galway

It was a disappointed Martin Boyle who emerged from the Galway dressing room to digest his side’s exit from the All-Ireland series.

The Derry boss was magnanimous in defeat and made sure to put his head in to congratulate the winners.

Derry’s six-game promising season ended without silverware and Boyle’s “biggest disappointment” was for his own squad. Two years ago, he praised his winning team, but this time he felt for the new crop in defeat.

“That’s probably the biggest thing… we didn’t perform up to our usual standard in the first half and the start of the second half,” he said.

Derry bounced back from their Ulster final defeat to Tyrone with a convincing win over Cork and he commended Galway on their level of intensity that was a fig factor in closing the Oakleafers out until the last ten minutes.

“You have to put that down to and congratulate Galway. They brought serious intensity and serious quality to the game, so fair play to them,” Boyle conceded.

“I’m proud of the character of them and the never day die attitude they brought to the last ten minutes. 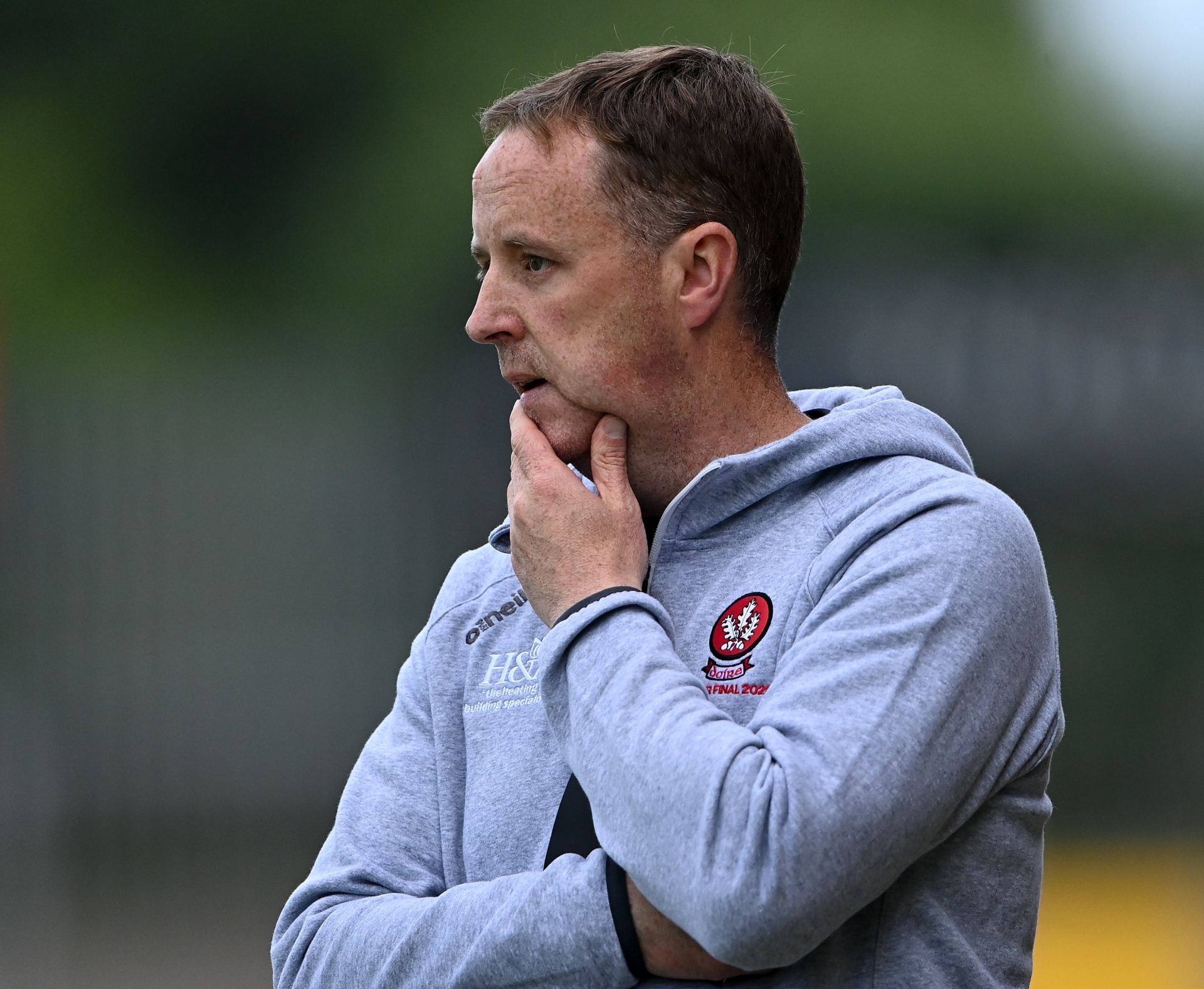 “To be seven points down with seven minutes to go and with the man down, it took serious character to bring that back. It hurts now, but in the days to come they boys will take pride from that.”

The Derry management team, present at Galway’s win over Dublin, watched over their energetic system that saw them sit deep before hitting on the break with Éanna Monaghan and Colm Costello their attacking duo.

“We were a bit too pedestrian in the way we moved the ball, we moved it half a second too slow compared to what we usually do,” he said.

“That’s not a blame, that’s a case of these boys being 16 or 17 years of age and playing on an occasion like this sometimes these things can happen and they’ll definitely be the better for it.”

Derry were hit by Jack Lonergan’s third minute goal and played fiddle for most of the first half. Eoin Higgins rattled the net for this side’s only goal on the cusp of half time and trailed 1-4 to 1-1 at the break.

“The second (Galway) goal was the big one that hurt,” he said of Costello’s 32-minute strike despite Shay McGlinchey’s black card giving Derry an extra for the opening 10 minutes of the second half.

“We knew going out and they’d be down a man and we talked about starting aggressively and going at them,” Boyle said of their half time message.

“That goal was the real killer. It set the scene of trying to play catch up and with the lead we left ourselves too much to do.
“I knew there would be a kick in these boys and I am really proud of their efforts, not just today but all year and they will be the better for this.”

Having a squad than bonded in each other’s company and developed during the season despite losing captain Ryan McNicholl was one of the points Boyle told his squad in the dressing room after Saturday’s disappointing exit.

“We told them that the memories they have picked up over the last few months will stay with them forever with the bonds and the friendships…they have to build on that in the future.

“That’s what county football is about and playing in that (environment) with this group of fellas this year and the years after this.

“That’s special. It will hurt for a few days but we said to them in there that after losing a player of the calibre of Ryan McNicholl it is to their eternal credit. They really dug in and went at and unfortunately came up short.”

In this third year in charge, Boyle commented on how the management team were honoured and privileged to being afforded the chance to work a “special” group of players.

“I hope it was enjoyable for them (the squad), you just can’t want to get to Owenbeg to work with men like that and it is a special place when you get a chance to work with them.

“For them boys, we feel they have developed as the season has gone on. Ultimately, they will look back with disappointment, to be a kick of a ball away from an All-Ireland final.

“There is a serious amount of pride and credit to be taken from their season.”

Of the 30 players on Rory Gallagher’s senior panel – preparing for an All-Ireland semi-final – came from the minor teams of the last eight years since their resurgence at underage level.

“There will be more to come from the 2020 minors and last year’s minors,” Boyle concluded.

“It’s good to be competing at the business end of the season and being really competitive. It’s good for us as a county moving forward…their clubs and their schools can take pride in it the player they are producing.”