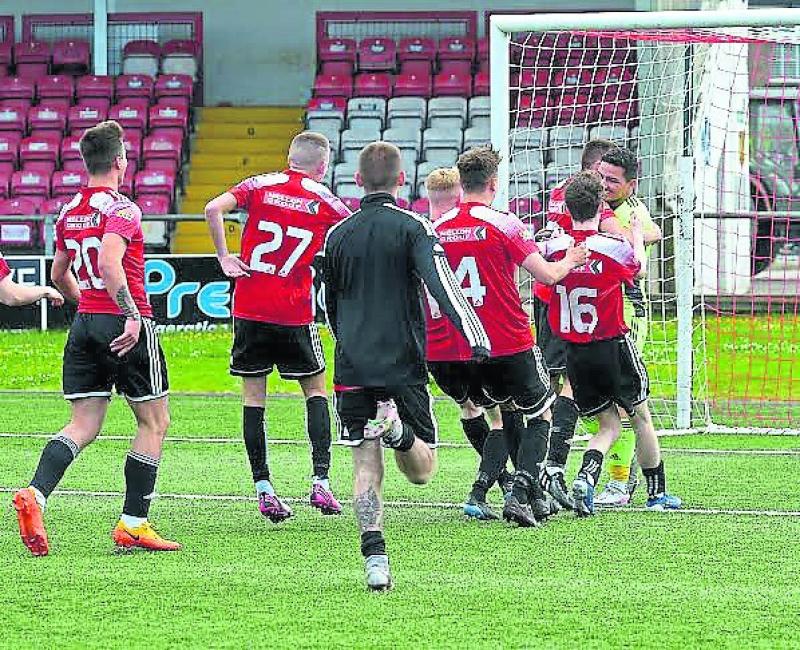 Maiden City Football Club came out on the happy end of a dramatic penalty kick competition to win the Palmer/McDaid Cup at the Brandywell on Saturday.

Tied at 2-2 after 90 minutes, and having battled back from 2-0 down, goalkeeper Ray Kelly converted the 22nd penalty of a tightly contested shootout and in doing so captured his side’s fourth cup of a highly successful season.

It promised much, especially for the football purists.

These two clubs pride themselves in playing a classy brand of football, and Saturday was no different.

Backed by a partisan breeze warmly wafting in from the greyhound track end of the stadium, Institute started brightly.

The Brandywell Stadium based side carved open the first real chance of the game when PJ Miller skipped through on goal only to see his tamely hit shot easily swallowed up by Ray Kelly.

Three minutes later, however, the same striker made no mistake when he dropped the shoulder, cut inside his marker, and curled a left-footed cracker past Kelly to give ‘Stute a deserved 1-0 lead.

With a quarter of an hour gone, Maiden City finally worked ‘Stute netminder Dylan Doherty who denied an effort from Tiarnan O’Connor.

In truth, both sides are blessed with a pair of quality ‘keepers, as adept with making saves aas they are comfortable with the ball at their feet.

Maiden City began to work their way into the game with Bobby Sweeney the pick of their midfielders – neat, quick feet and with a killer pass also in his locker.

For Institute, the powerfully built Cormac Burke carried much of their threat, patrolling between forward line and midfield looking to break up moves and create something for his own side.

And it was the roving McCormick who thrust forward to score ‘Stute’s second goal, converting an inch perfect assist from Paddy McLaughlin.

Gareth Faulkner’s speculative effort signalled the resumption of the hostilities in the second half, his shot tipped round the post by the excellent Dylan Doherty.

The Brandywell Stadium boasts a huge pitch, but the energy and athleticism of both sets of players left space very often a premium. But despite the smothering intensity, the football was crisp, nearly always forward thinking, and easy on the eye. Competitive but never nasty. 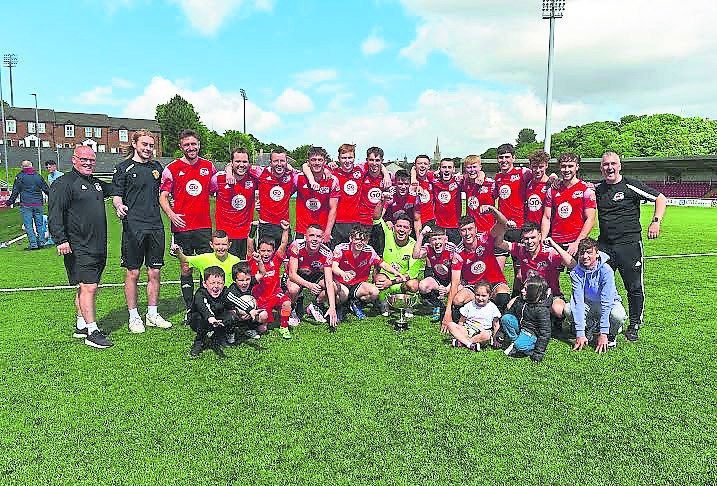 As the second half progressed, Maiden City gradually built up the pressure and with 20 minutes to go Dylan McGavigan finally gave his side a foothold in the contest when he tapped home from close range from a Brenan Moore assist - both players recent and perfect impact substitutions made by Colm Cassidy.

With Conor McGee and Michael McAnea impressing at the back for Maiden City, ‘Stute struggled to reassert their first half form.
Ten minutes later it was 2-2. Brendan Moore won a penalty in the 80th minute only to see Doherty save his spot take.

Controversy raised its head when the referee, well situated to observe events, immediately awarded a second penalty deeming Moore to have been fouled as he attempted to score the rebound.

IN PICTURES: Local youth sides have a ball at Gerry McAuley Festival of Games

‘Stute manager Brian Donaghy was incensed, but there was little he could do other than watch on as Moore scored the retaken spot-kick to pull the two evenly matched sides finally level at 2-2.

With momentum the wind behind their sails, Maiden City seemed the side most likely, however. Each new substitution brought on fresh legs and fresh attacks. Mark Toland typified the depth of Cassidy’s talented young squad. Such a lovely wee footballer, sharp and elusive on the ball and, just as importantly, no stranger to racing back to help out his defence when required. 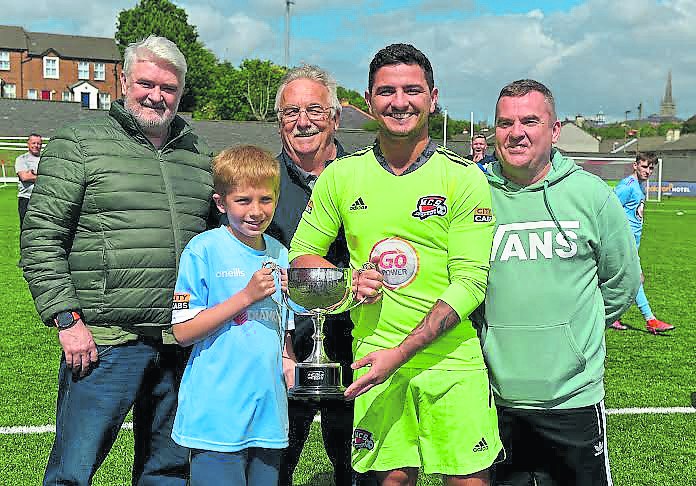 All of which brought the sizeable and well entertained Brandywell crowd to a penalty shootout.

Dylan McGavigan, for Maiden City, and Cormac Burke, for ‘Stute, set the tone with two well dispatched spot kicks. ‘Keepers Kelly and Doherty managed to pull off a couple of saves each, but by the time all outfield players had stepped up, the heavy burden of victory or defeat fell on the shoulders of the two outstanding goalkeepers.

Kelly blasted his effort low but while Doherty dived smartly to his right and managed to get a few fingers on the ball, he could not stop the ball rippling the back of his net.

Doherty himself, unfortunately for him, then saw his own effort well saved by his opposite number. Kelly had won the cup for Maiden City.

What drama. And what an advert for football in the city.

RAY KELLY - Dylan Doherty, Sean Leppard, Cormac Burke and PJ Millar all played well for the losers. But history is written by the winners with Bobby Sweeney, Brenan Moore and Mark Toland, among othersd, all impressing for Maiden City. But their M.V.P. was captain and goalkeeper Ray Kelly.

MOMENT OF THE MATCH

Ray Kelly’s penalty save to deny Doherty, ultimately, was the difference between the two protagonists. Kelly the played a real leader’s role by stepping up and converting his own penalty, the 22nd of the shootout. Victory was Maiden City’s.