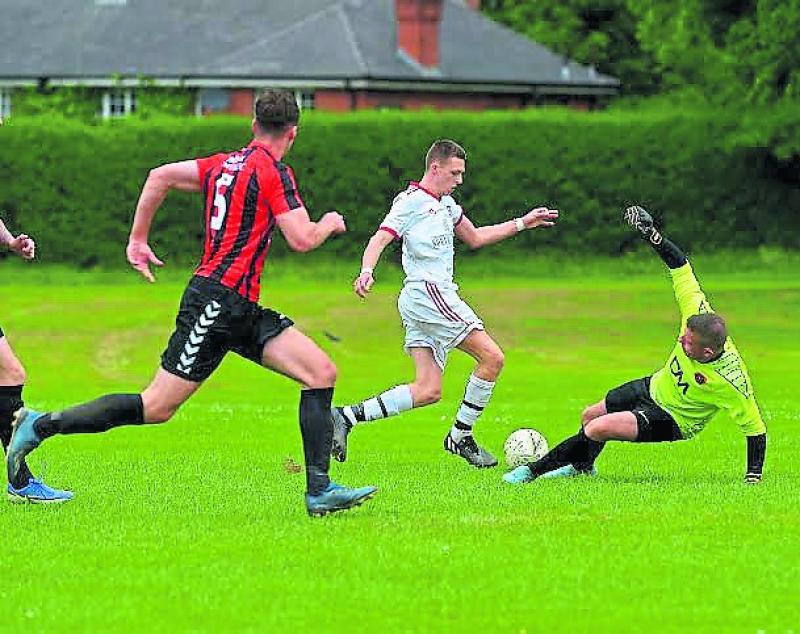 Entering into this Terry Kelly Cup quarter final at the weekend, a tight match was anticipated by most people at Clooney Park West.

Three points separated the teams in the league and, with a place in the semi-final to face Newell’s on the line, both teams were looking to book their ticket into the next round.

Maiden City fielded a young team that has played a lot in the league all year with plenty of promising young talent in their line-up.

Phoenix, who sit second in the league, came in looking to cement their place as one the top teams in the league and they started early and strong and soon blew the youthful Maiden City team aside.

The game kicked off with a bang as after only four minutes of play Bradley Callaghan pounced on a mix up at the heart of the Maiden City backline to round the keeper and finish. He showed great technical ability and composure as he calmly took the ball around Eoin Hare in nets.

In the opening exchanges it became clear that Phoenix were on top of the game and had their early lead to show for it.

Maiden City were finding it hard to pass the Phoenix press and only ten minutes later Phoenix grabbed a second. This time it was Logan Stret who got the goal, as his shot from distance was deflected off Lee Toland leaving the poor Maiden City keeper stranded.

Phoenix could smell blood and kept pushing forward and only three minutes later in the 17th minute they added a third to make it 3-0.

Phoenix attacked and Kevin Deeney played a peach of a ball across the six yard box to PJ Miller who just had to get a foot to the ball to stick it in and give his side a commanding lead.

Straight from kick-off, however, Maiden City rose from their slumber and got one back courtesy of a great ball through from the Moore to Dylan McGavigan who took the ball past the keeper for the easy finish.

However, the comeback story was soon killed off as in the 21st minute Caolan McFeeley placed an inviting cross straight onto the head of man of the match Kevin Deeney who scored to double his tally for the day and put Phoenix 4-1 up. The match died down for a while, with Phoenix happy to keep the ball and play it around leaving Maiden City with little to do.

This Phoenix team wasn’t in the mood to be kept quiet for too long and in the 34th minute Kevin Deeney finished well past the outstretched Maiden City goalkeeper to put the game well out of reach.

IN PICTURES: Local youth sides have a ball at Gerry McAuley Festival of Games

They weren’t finished there either and as the half time whistle was in the referee’s mouth they burst forward to have one more attack on goal which was saved but Ryan Cleere was on hand to stick the rebound past the goalkeeper’s reach.

The half time whistle followed shortly with Phoenix in firm control with a 6-1 lead.

The second half started with Maiden City playing some football that was unfortunately lacking in the first half and they were on top.

The half time substitutes Dylan McGrath and Ethan Doherty were slotting in well and Maiden City broke through to win a penalty as Dylan McGavigan was brought down in the box by the Phoenix goalie Paul Tracey as he attempted to prevent him going past him.
Tracey was yellow carded for his effort and McGavigan slotted away the penalty he earned himself. Could a comeback be on the table?

City continued to show promise, but with little in the way of shots on goal to show for it.

They only seemed comfortable to shot when they could see the whites of the goalkeeper’s eyes.

After a busy start to the second half Phoenix killed any hope of a miraculous comeback in the 63rd minute with a Jack Bradley shot from distance which was deflected straight in to the path of Ryan Cleere who tapped the ball into the gaping goal.

The score line now read 7-2 but Maiden City will feel that they should have scored more if they could have tested the keeper more regularly.

For the remainder of the match, Phoenix were contempt to slow the game down and rarely rushed forward as it was now clear they would be progressing to the next round of the cup at Maiden City’s expense.

It was a game that was over as a contest by the end of the first half, but credit must be given to a Maiden City side brimming with brilliant young talent who were unlucky to be on the end of a score line like this.

On the other hand, Phoenix were deserved winners who showed their class throughout and will be raring to go for their semi-final clash with Newell in the coming weeks.

They wwill be looking to go even further on to the final to face the winner of the Foyle Harps and A.F.C. Goldswifts last four encounter which looks like its building up to be another great match between two top teams.

KEVIN DEENEY was incredibly influential for Phoenix and all of their attacks seemed to go through him as he got himself two goals and an excellent assist to show for his efforts. The Maiden City back line couldn

TURNING POINT
It was a match that was devoid of any real tension from the 14th minute but it has to be said there were some very good goals to come from it. In particular Caolan McFeeley’s excellent cross which led to Kevin Deeney finishing with a resounding header into the top corner was probably the pick of all the bunch.