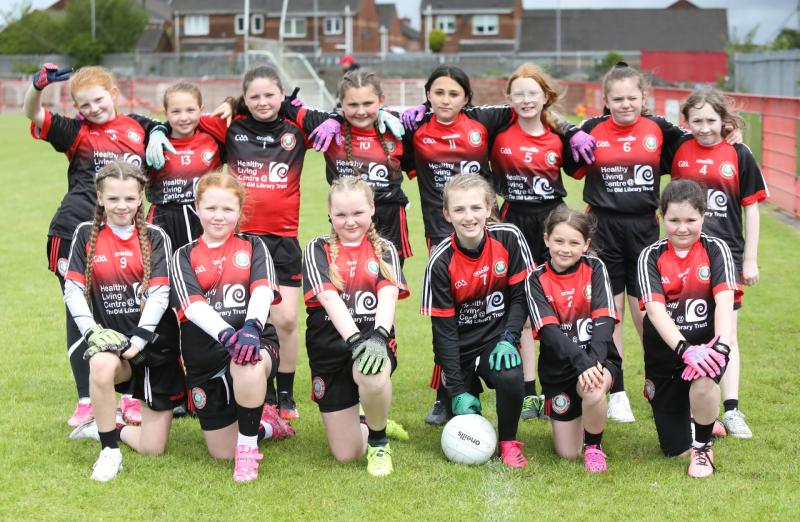 Laying the foundation for the future of gaelic in the city is one of the main components behind the success of the Primary School Cup competitions which continue at Celtic Park this weekend.

Sean Dolan’s, Doire Trasna, Doire Colmcille and Steelstown Brian Ogs have all hosted events in the past few weeks, with boys and girls from across the city returning to competitive yet fun and friendly games after a two-year enforced break.

The Primary Schools’ Cup competition has exploded from a handful of schools to almost 30 schools in just a few short years, with the growing links between schools and clubs building an interest and enthusiasm for the sport that hadn’t been seen previously.

That continues this weekend with the winners from each club meeting at Celtic Park. It is all about hard work behind the scenes and fun on it according to Dolan’s coach Brian O’Donnell.

“There has been good work happening for the last ten years, and even beyond that. It’s easier these days to promote it because of social media, which allows you to show the good work that is happening in real time.”

The availability of more modern facilities for clubs has also been a boost, with huge progress made in that regard in the last few years alone.

“The new facility at Dolan’s is very important and it’s going to be great, not only for ourselves, but all the clubs will benefit from that,” Brian continued. “There will be indoor blitzes and school blitzes and games going on over the winter. It will be a great hub for Sean Dolan’s, but it will also be a great hub for everybody to play games against other city teams.

“Everyone having their own facilities is great but you have nothing without the children. The clubs are growing and if you work hard, you reap the benefits.  You need the schools, and you need everybody weighing in too.”

It’s all about building for the future, and developing a love for the game at primary school age will hopefully lay the foundation for boys and girls to play at a higher level going into their teenage years and beyond.

“It’s now about how we raise the standards – that’s about putting more work into the schools, more children going to the clubs, and the clubs helping those wains to play at a higher level,” Brian stated.

“The talent is out there. Derry getting to an Ulster final, and maybe winning and maybe a few outings at Croke Park, things like that are ging to make our lives easier. A bit of success in the county will raise the profile in the city. It’s about driving the talent on in the city. We’re looking at the bigger picture here. We want to see more people playing in these school competitions and then playing for Derry Minors or Derry seniors further on down the road. That’s what it’s all about. We have that ambition for everybody.”