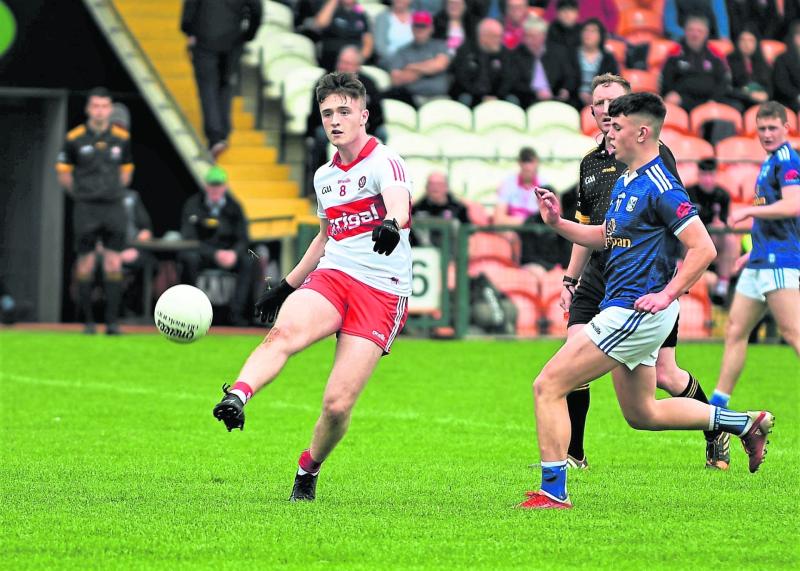 Derry minors have reached the Ulster minor final after beating Cavan on Saturday evening in Armagh. Pic by Rob Donnelly

Derry minor football Martin Boyle has appealed for Derry fans to get into St Tiernach’s Park early on Sunday to get behind his side’s quest for an Ulster title.

It’s the first time the county senior and minor teams have graced Ulster final day together since 2000 when the minors lifted the Murray Cup, with the seniors coming up short to an Armagh team on the rise.

Derry defeated Cavan in Saturday’s minor semi-final to book their place in the decider for the sixth time in eight seasons.

“These lads deserve the Derry support and that can only be an advantage for our men to feed off the positivity around the county, but also feed off the huge Derry following in Clones on Sunday if they come in early,” said Boyle.

“It is usually the second half of the minor match when the crowd starts to fill up. If the game is tight and competitive, you’d like to think it could lift our boys.”

It’s a second meeting of the teams this season, with Tyrone edging out the Oakleafers to the lift the Minor League (Jim McGuigan Cup) despite a late Johnny McGuckian goal.

Derry have progressed to the Championship final playing a measured brand of football beyond their years, leading to wins over Armagh, Donegal and Cavan.

Saturday the only time they failed to find the net, but showed great resolve to have five points to spare over Cavan despite the absence of captain Ryan McNicholl who had his season ended with a serious knee injury.

Derry might have to plan without defender Eoin Scullion. The Lavey man, who missed their win over Donegal with injury, was replaced after 40 minutes of Saturday’s win.

“He was feeling it a bit so we’ll see how it settles before we make call on him,” Boyle said. “He didn’t pull up, but he felt a bit of pain with it. We are glad he got 40 minutes because hasn’t done much of late.”

Derry’s defence has centred around Scullion, Fionn McEldowney and Johnny McGuckian, who was moved back to pick up Karl Joseph Molloy in their win over Donegal.

Goalkeeper Ben O’Connor, an outfield player with Desertmartin, has played a sweeper/keeper while Dara McPeake and Ruairi Forbes have formed regular midfield partnership.

In attack, in the absence of McNicholl, Conall Heron, Eoin Higgins and Cahir Spiers have played central roles.

Tyrone lead the way with 24 Ulster minor titles and if Derry are to take their tally to 16 on Sunday, they’ll have to tame a Red Hand attack that includes Noah Grimes and skipper Eoin McElholm, son St Mary’s Magherafelt MacRory Cup selector John.