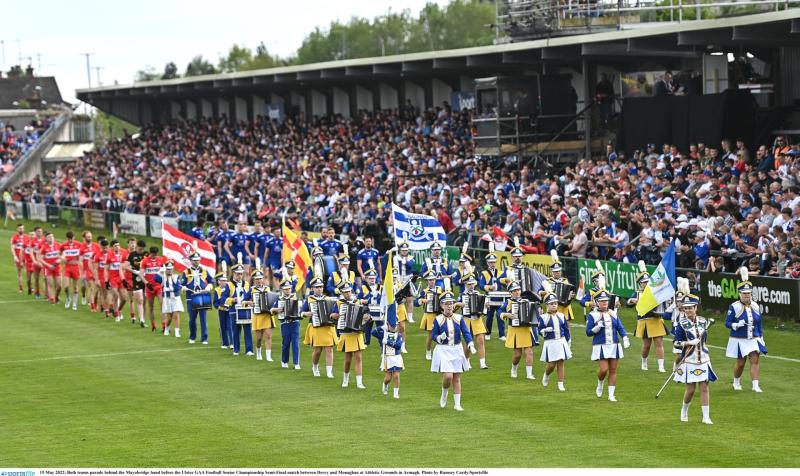 Derry has gone into football fever in the past month and when Chrissy McKaigue leads the troops from the bowels of the Gerry Arthurs Stand on Sunday it’ll go to another level completely.

The Galway debacle dampened the thoughts of many Derry fans as much as it ended any promotion hopes, but the sight of Gareth McKinless eating up every square inch of empty Healy Park grass earlier this month sparked a revolution.

Conor and Ethan Doherty joined in, as the nation began to take notice of Derry’s rising from the ashes of a decade of championship emptiness.

Derry were ticking along nicely before Brian Kennedy threw out a leg in frustration and Shane McGuigan’s penalty sealed victory before half time.

It was like ‘Groundhog Day’ two weeks ago in Armagh when McKinless and Heron landed blows on a Monaghan team that failed to address the void in the centre of their defence.

For the bags of big game Ulster Championship experience Derry are shy of, they’ve made up for it with sheer energy that Rory Gallagher has poured into their foundations. It will allow the county to bed in one or two new players every year to provide sustainability. 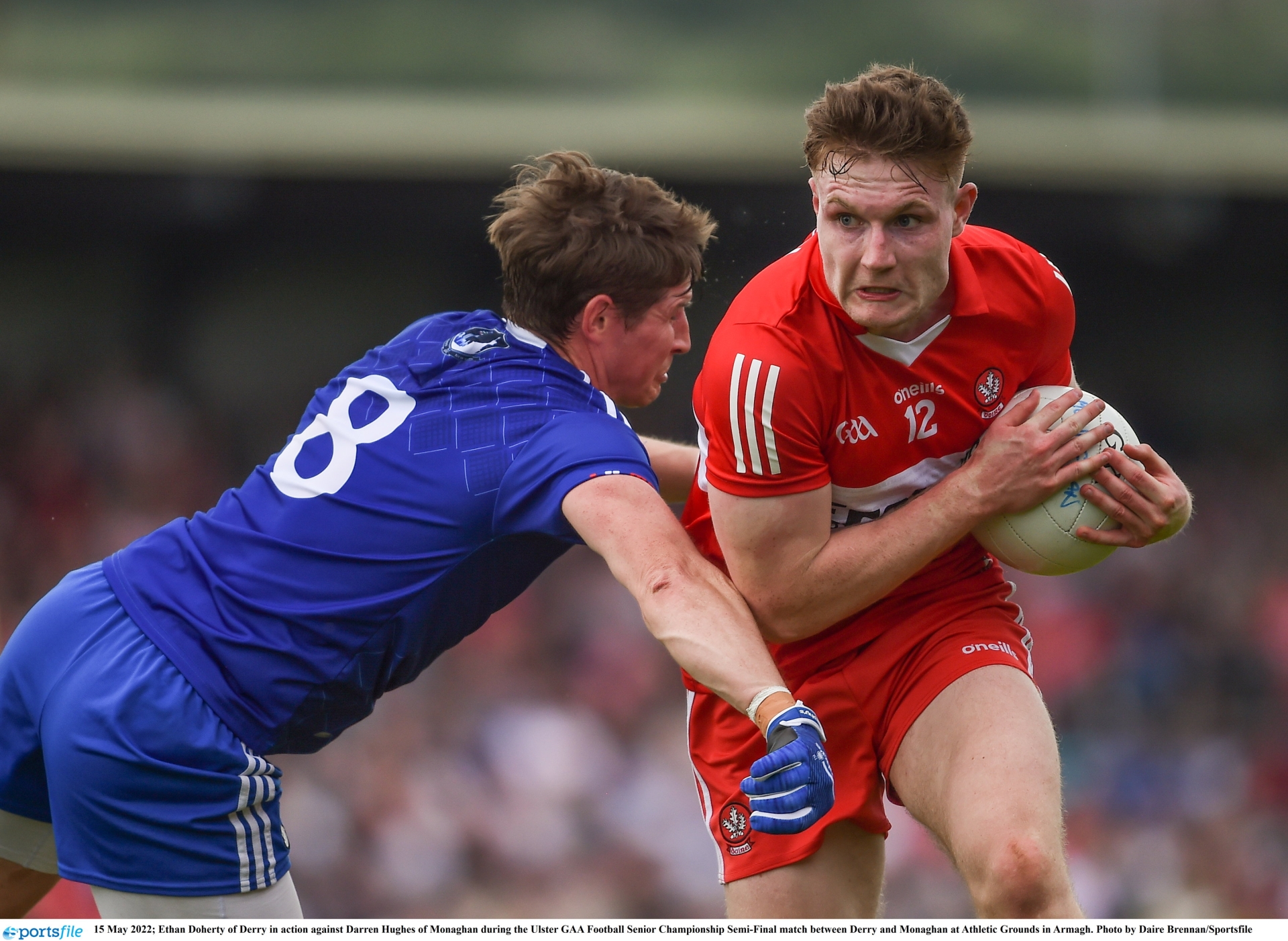 Now it all turns up a notch. Now it’s about grabbing something real. The prize on Sunday is seismic.

Derry went from a two-point hammering in Cork in 2020 to dishing out a real filleting to the Rebels two years later. The same could be said for losing to Down in 2020 in a game they had in their grasp, to toying with them earlier this season

The interim year was a waltz out of Division Three and afternoon when they did everything but beat Donegal in Ballybofey last summer.

The cogs are turning and the top teams are in the crosshairs. Just as Tyrone and ‘Banty’ McEnaney.

Donegal are in their tenth final in 12 years and after swatting aside a listless Armagh, they needed two slices of fortune for goals to put daylight between themselves and a Cavan team they always had their noses in front of, once the solace of half-time presented the chance to regroup.

Derry have the good news that Niall Loughlin is “good to go”. Gallagher confirmed a scan didn’t show any hamstring damage after he was replaced in the win over Monaghan. 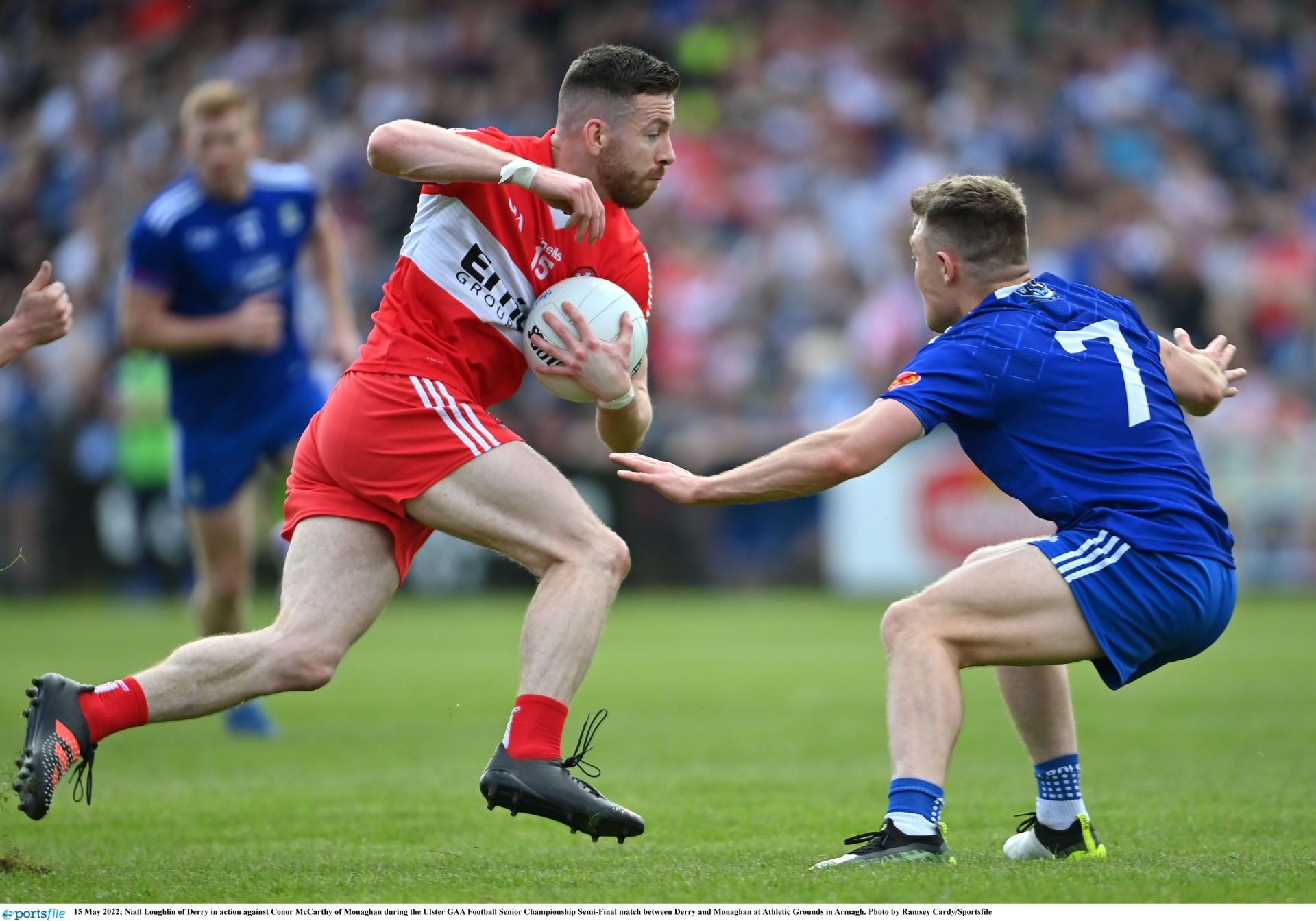 The Derry boss outlined how a “bug” kept Padraig Cassidy out of training after the Tyrone game.  Oisin McWilliams would’ve been used if needed. Cassidy is back training at “the level” and McWilliams is in full contact after time out with a broken jaw.

Aside from Oisin Gallen, Declan Bonner will be picking from a full hand and it will be interesting to see if he decides to hold Odhrán McFadden-Ferry in reserve again. Caolan Ward was called ashore in the Cavan game, but he is one of six players to start all nine League and Championship games this season.

It’s hard to see how Rory Gallagher will go for any change, unless he is tempted to start Emmett Bradley with a mind on Donegal’s array of size across the middle third.

If Michael Murphy pulls outfield, he could be joined along the middle – on kick-outs - by Ciaran Thompson, Hugh McFadden, Jason McGee and Michael Langan. It gives Shaun Patton plenty of options, especially after finding a yellow jersey with 21 of his 22 kick-outs – of varying distances – against Cavan.

It's the same wall that made Armagh custodian Ethan Rafferty’s afternoon in Ballybofey living hell. It’s hard enough to win a game with the ball, but without hands on the leather make’s is almost impossible. 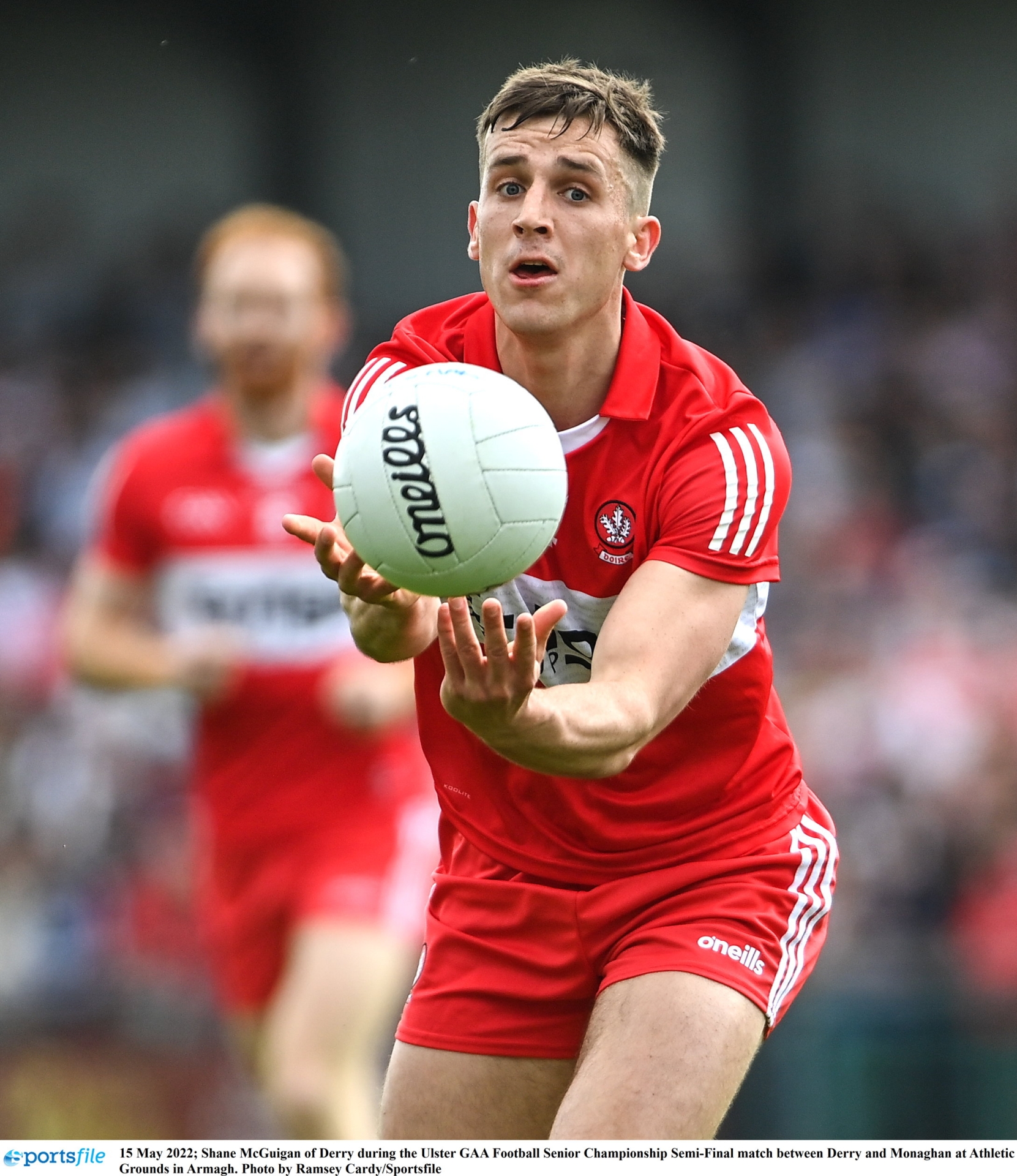 On the flip side, Derry had 54 per cent success on their kick-outs against Monaghan, but made hay from the ones they did secure, with 2-5 coming as a direct result.

That’s the interesting part of this weekend. How Derry’s raiding runs from defence pan out if they are forced to kick short?

A lot will depend on where Emmett Bradley starts. If he’s held in reserve again, then, on Patton’s kick-outs, Paudi McGrogan is going to have to pair up with Michael Langan. With Conor Glass and Hugh McFadden – the respective defensive midfielders – up against each other. It will leave McKinless on Jason McGee with Shea Downey sitting in the pocket.

In a straight defensive formation, if Chrissy McKaigue pairs with McBrearty, it will leave Conor McCluskey with a role on Jamie Brennan.

Then you have the Michael Murphy debate. Where is the best place to play him?

When he came off the bench last year, Derry got sucked towards him enough to open the door for Niall O’Donnell to pick off points.

Defensively, if Derry can keep a clean sheet, it’ll be the first step towards a winning position. Donegal have scored an average of 1-12, down from 1-18 last season. 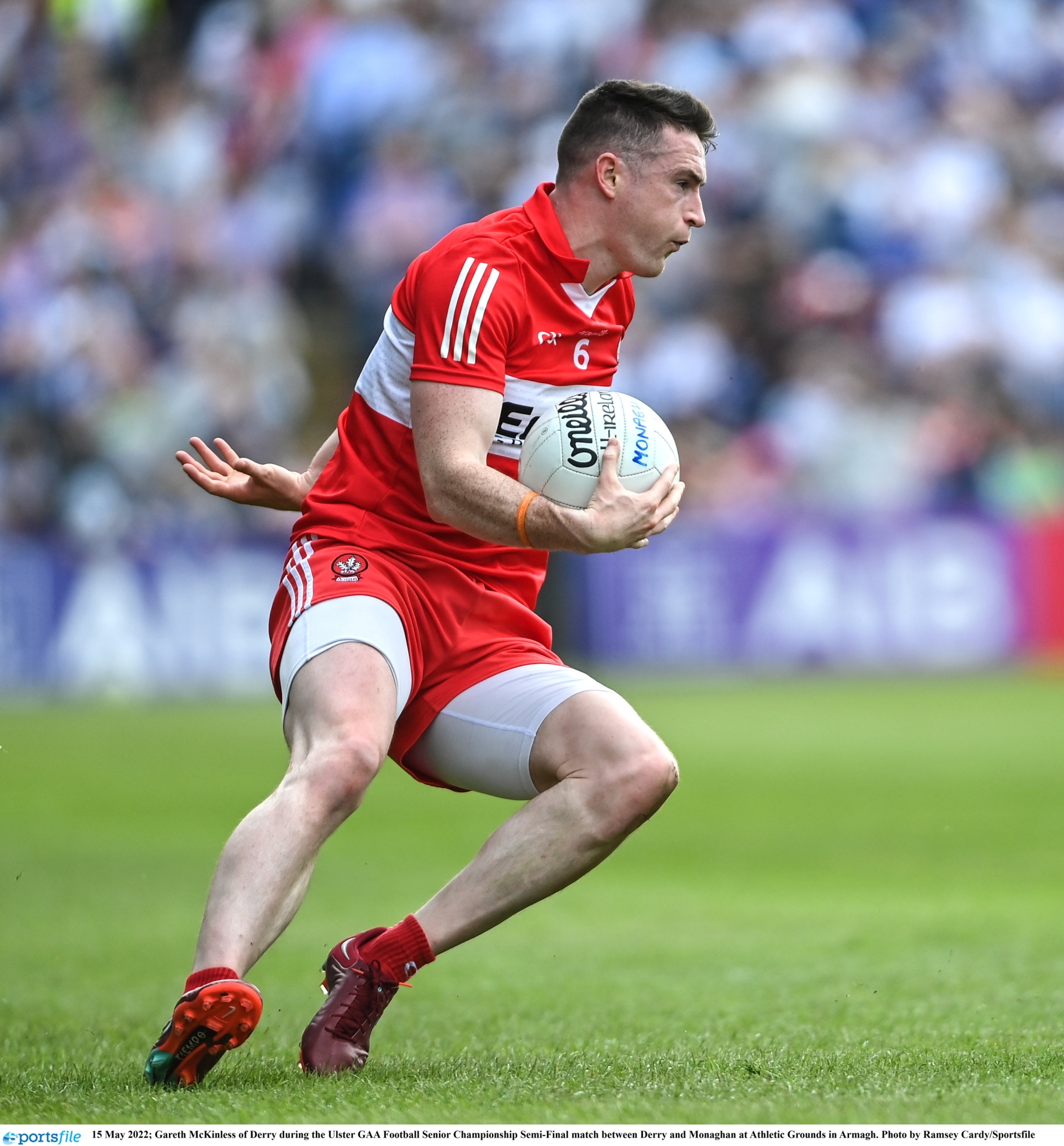 It points to a battle of wills and Derry would need to find the net themselves if they are going to find any degrees of breathing space on Sunday.

If there is a team that know how Donegal function and where their pulse is, it’s Rory Gallagher. He’ll have to plot another avenue of attack if Hugh McFadden sits as their dedicated sweeper. It’s something Cavan’s aerial threat could prompt with the likelihood of pulling Neil McGee in for a first start highly unlikely.

Bringing Shane McGuigan to centre forward could be an option to help bring their plan in different direction.

Neither team have conceded a goal in their two games on the way to Clones. You’d feel a goal would win it, but Derry have the defensive and managerial cards to get over the line without raising a green flag.

It's the biggest test, by some distance, for a Derry team beginning to grow.

Eoin McCloskey recalls his recovery from a serious injury during his early career.