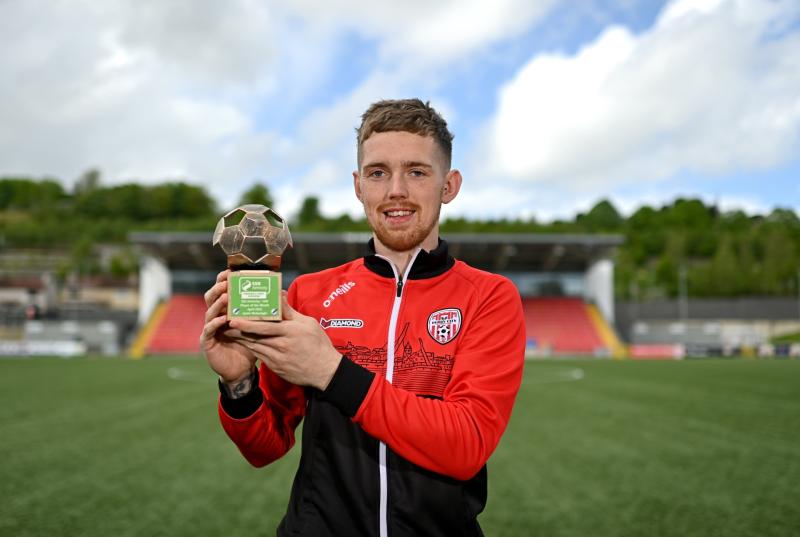 Jamie McGonigle has been named the SSE Airtricity/Soccer Writers Ireland Player of the Month for April.

Jamie McGonigle has been named the Soccer Writers’ Association Player of the Month for April, becoming the first Derry City player to win the award in nine years.

McGonigle scored five goals in two games towards the end of last month, including his first Derry City hat trick in the 7-1 demolition of UCD at the Brandywell. The 26-year-old followed that up by scoring two goals at Richmond Park as Derry City won 4-0 in Dublin to take him top of the Goal Scoring chart with nine goals.

McGonigle is the first Candystripe to win the award since Barry McNamee in April 2013. Will Patching was also nominated for the award as Ruaidhri Higgins’ team picked up five wins and one draw from seven games during a busy month.

“I’m delighted to win,” McGonigle said. “It’s good recognition for the month that I’ve had and the goals that I’ve scored. Some of the nominees that were there, the quality of players, I am delighted it was me who was selected. “The hat-trick against UCD helped massively as I was on a drought. It’s not that I wasn’t playing well but I just wasn’t scoring goals so that gave me my confidence back. I then got another two against St Pat’s the following week. I always set myself a target for 20 goals and I’m on nine from 14 games at the moment so I am on target to hit that 20.”

The news is a great boost for the club ahead of a huge game at Shamrock Rovers tomorrow night where the newly crowned Player of the Month will be hoping to add to his already impressive record of 17 goals and five assists in just 33 appearances since joining Derry City last summer.

Andy Lyons of Shamrock Rovers finished second in the voting, with McGonigle’s team-mate Will Patching third.