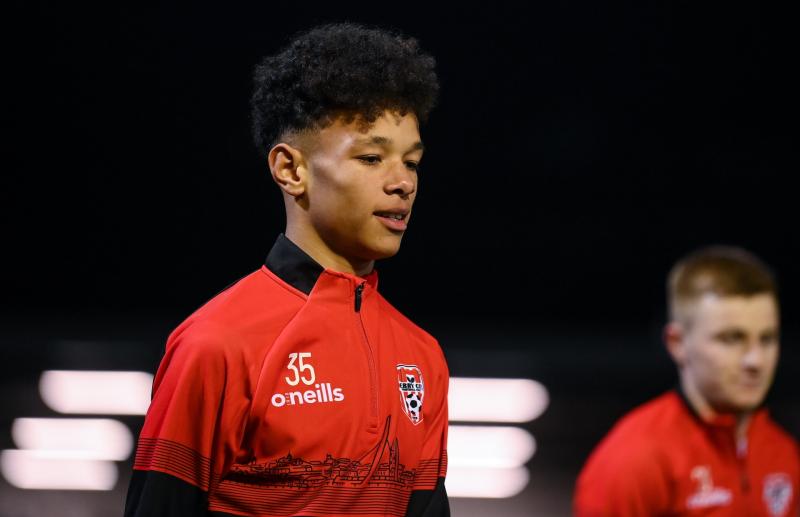 Ruaidhri Higgins admits he is unlikely to be adding to his squad to cover long-term injury problems unless someone significant becomes available in the next few weeks.

While a young talent in Trent Kone-Doherty looks set to leave the club to join Liverpool, there is likely to be no additions, despite the long-term problems to midfielders Ciaron Harkin and Michael Duffy.

Higgins has also been without Patrick McEleney and Matty Smith for the last two games, during which time Derry City returned to the top of the Premier Division with victories over Drogheda United and St. Patrick’s Athletic.

There has been special dispensation given to players from Russia and Ukraine to move clubs due to the situation in their home countries, while other players out of contract completely could still be signed. But Higgins seems happy with his squad despite the bad luck with injuries.

“You always get people put forward to you, but the players who have been in and around have done brilliantly, so unless something really attractive pops up then we won’t be doing anything,” he insisted. “The transfer window has closed so it would have to be out of contract players so your options are very limited and unless it really appealed we wouldn’t be doing anything.”

One area of the squad Higgins is particularly happy with is his goalkeepers, insisting he is in a very fortunate position to have such a healthy competition for places for his number one spot.

Brian Maher, who has played every minute for the first team this season, joined in training with Stephen Kenny’s Republic of Ireland squad yesterday, alongside Gavin Bazunu and Mark Travers, at the FAI National Training Centre, in Abbotstown.

Maher, who is part of Jim Crawford's Republic of Ireland U21 squad to face Sweden next Tuesday evening, has kept three clean sheets for the Candystripes, who sit top of the Premier Division unbeaten after six games. Higgins admits he has had a tough choice between Maher and Nathan Gartside who performed so well for him last season.

“You need a couple of very good goalkeepers in your team and we have that. Competition is rife in the minute, including that position. Brian is in at the minute and doing really well but he knows himself he has to keep doing well to stay in the team.”
With Jack Lemoignan out on loan at Ards, the goalkeeping situation at the club looks very healthy for the next few years at least.

“We have three prominent young goalkeepers and we have young Fintan Doherty below that as well who’s in the Ireland U17 squad so we’re very, very lucky,” Higgins stated. “They are all young and have many years ahead of them so we are in a fortunate position.”

Meanwhile, Higgins would not be drawn on speculation linking talented City underage winger Kone-Doherty with a move to Premier League giants Liverpool.

Reports emerged yesterday suggested that an offer for the 15-year old’s services was imminent from Anfield and set to be a six-figure sum.

Kone-Doherty was involved in first team’s pre-season preparations and played a small part in the Billy Kee Cup victory over Institute, and he was also named on the substitutes’ bench for last week’s game against St. Patrick’s Athletic at the Brandywell.