Will Patching: 'There's a lot more to come from Derry City!’ 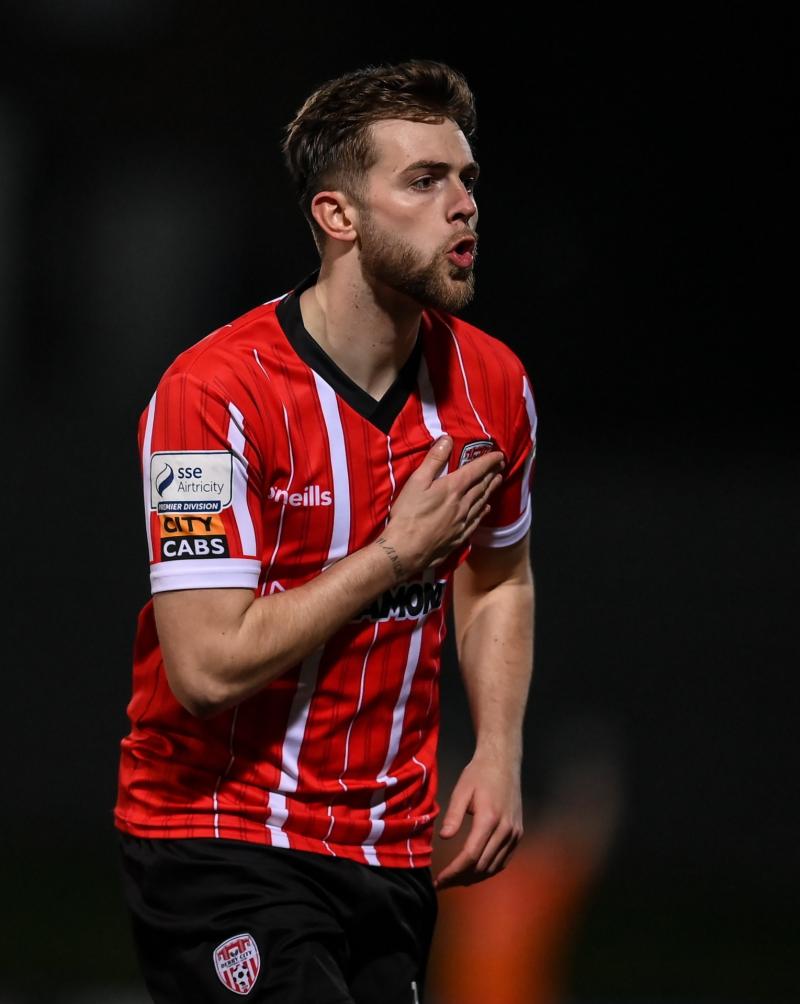 BACK ON TOP… Will Patching celebrates his first goal against St. Patrick’s Athletic.

Will Patching believes there is a lot more to come from Derry City even after the club’s best start to a league season in 13 years.

The Candystripes sit on top of the Premier Division with 14 points and undefeated after six games, a feat the club hasn’t managed since Stephen Kenny was in charge back in 2009.

Patching hit a 93rd minute winner over St. Patrick’s Athletic on Friday night to take Derry back to the top of the league and he believes that the squad effort, even without the likes of the injured Patrick McEleney, Michael Duffy, Matty Smith and Ciaron Harkin, means that anything is possible.

“I think we still have a lot more to come,” he said. “With our general play and stuff we have been good but with the players out coming back we can only get better so there’s exciting times ahead.

“We’ve had a few tough games and we’ve had a tough run, but we are showing our quality and we are sticking together in games. With the quality of the group we have got now, we want to be getting the three points from games like that and thankfully we did it.”

Remarkably, while Patching took his tally of Derry City goals to 9 overall with his double against St. Pat’s, his goals on Friday night were the first he has scored from open play in his time at the Brandywell. He picked the perfect time to end that sequence of free kicks and penalties with two superb goals from distance.

“Last year in the league I only scored from free kicks and penalties, I didn’t score from open play, so it’s good to get two in this game and hopefully I can keep delivering,” he continued.

“It came out and it came out bouncing and I didn’t know whether to volley it or not, so I just took a touch and thought I’ll smash it and see what happens and thankfully it went through the gap and it went in.

“It was a great atmosphere and the fans have been great all season and I’m happy to repay them with a goal in the last five minutes. You see games go long beyond 90 minutes these days and a lot of goals are scored in those times, but it just shows you that all the work we put in in pre-season is paying off. We’re scoring late goals which shows the fitness of the boys and the character of the group as well.”

Derry City are without a game for two weeks now meaning that they will remain at the top of the Premier Division until April 1 at least. To be top of the pile despite missing some top players through injury and having played some of the league’s best teams, says a lot about how far the team have come in a short time according to Patching.

“They were always going to be hard to play against so we’re just delighted to get the win in the end.

“We’re on a good run so we never really want to stop but it will be good for the boys to get the feet up and have a day off and see what happens, but we’ll be ready to go when the next game comes.”