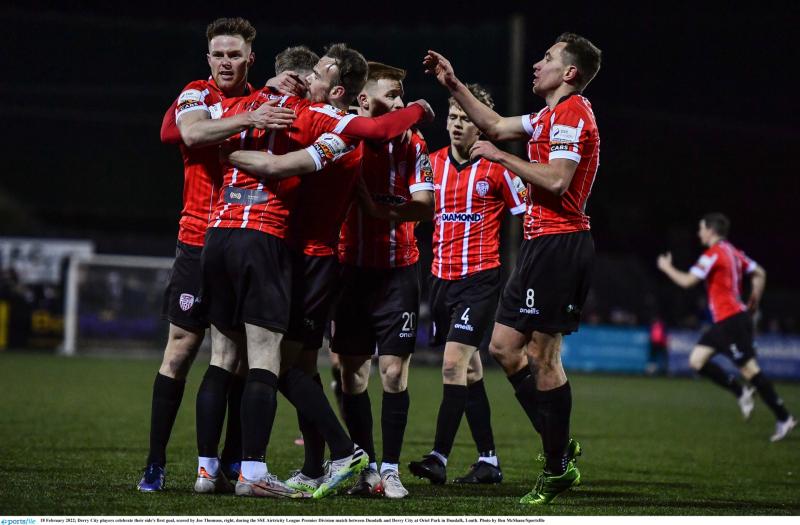 Derry City came from behind twice to earn a point at Dundalk on the opening day of the new season, but they missed an incredible chance to win the game late on.

Having worked so hard to get back into the game, Derry bossed the closing stages and should have won it when Jamie McGonigle went through on goal, only to see his effort smash back off the crossbar. It was the second time in 60 seconds that the striker had struck the woodwork.

A scrappy game finally exploded into life on 32 minutes when Dundalk opened the scoring. The lovely Joe Adams set Stephen Bradley away down the right and he turned inside Ciaran Coll all too easily before shooting across goal, past Maher and into the net to make it 1-0.

Derry desperately needed something at this stage, and it came from Jamie McGonigle on 40 minutes.

The striker did superbly to outmuscle Andy Boyle on the right before racing away down the right.

The only player he had in support was Joe Thomson, and McGonigle found him at the back post with the perfect pass across goal, allowing Thomson to rifle the ball into the roof of the net to make it 1-1.

It was Dundalk who got the crucial breakthrough though on 73 minutes.

A corner into a crowded penalty area saw Maher lost in the crowd and Mark Connolly forced the ball over the line to give the home side the lead for a second time.

That lead lasted just over five minutes however as Derry hit back emphatically. James Akintunde did brilliantly down the left to beat Sam Bone, and he took the ball all the way to the by-line before crossing for McGonigle who equalised with a brilliant diving header from close range.

Derry then came agonisingly close to taking the lead when they hit the bar twice in the space of 60 seconds, both times through McGonigle.

After striking the crossbar with an audacious effort with his back to goal, the striker then raced clean through on goal and smashed the ball past Shepperd, only for the ball to smash back off the frame of the goal. It was an amazing chance to win the game gone for Derry.