"Craig is admired by his peers and staff alike, he is an exceptional role model" 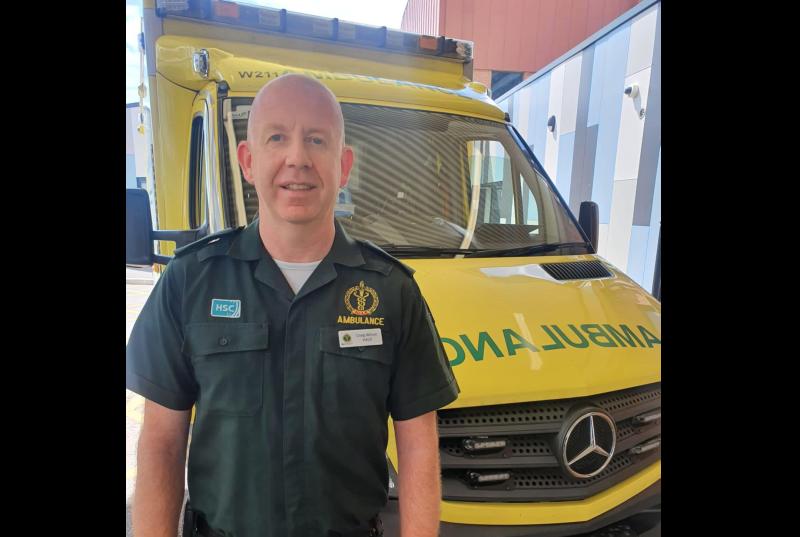 Altnagelvin's Supervisor and Hospital Ambulance Liaison Officer, Craig Wilson, is to receive the Queen’s Ambulance Medal in Her Majesty's birthday honours this year.

Craig has been working as part of the Northern Ireland Ambulance Service (NIAS) since 1996 and his career has since grown from strength to strength.

Craig is a much loved colleague at Altnagelvin Hospital and his managers, local clinical teams and colleagues alike have always recognised his huge potential for helping everyone he meets.

One of Craig's colleagues said: “Craig joined the Northern Ireland Ambulance Service in 1996 as an Ambulance Care Attendant before qualifying as an Emergency Medical Technician in 1998.
"In 2019, he became a Station Supervisor in Altnagelvin Ambulance Station where he managed 100 staff of varying grades.

"Although a role historically held by Paramedics, Craig rose very quickly to the challenge of ensuring staff and patient safety throughout a Pandemic.

"Craig will also be seen at incidents alongside crews, supporting them after tough calls or coaching newer staff members to get the best from them.

"Craig is passionate about ensuring that his staff provide the best care possible to the surrounding population and he has worked tirelessly to support them.

"Whilst working as a Supervisor, Craig realised that building good relationships with other Health Care Trusts was key in ensuring that his crews were available to serve the local community and in 2021 took up the dual role of Supervisor and Hospital Ambulance Liaison Officer.

"The Northern Ireland Ambulance Service receives constant positive feedback from Craig’s colleagues, managers and the local hospital clinical teams who have found that his excellent communication skills, passion about patient welfare and ability to step up to a very challenging role in the midst of a crisis, instills confidence in others.

"His proactive management style and open door policy means he is admired by his peers and staff alike, Craig is an exceptional role model.

"She is passionate about the health, safety and wellbeing of all her colleagues and I am delighted that she has been honoured for her work"

"Craig believes that he can be a force for change and his concern for his colleagues’ welfare has led him to being a Union Representative which provides a link between his colleagues, his union and managers.

"In this role Craig believes he can affect change with his innovative and inventive ideas. He is a role model for all staff in the Operational environment, going that extra mile to ensure staff feel safe, valued and empowered to complete their roles.

"Craig has also become an ambassador for the Northern Ireland Ambulance Service in his work alongside other emergency services representing the service when planning for large events that have the potential to cause operational difficulties for the blue light services.

"In the past, Craig has been recognised for his bravery in rescuing a patient from a burning building.

"Craig is an individual with exceptional problem solving skills. His calm, caring, industrious nature has been instrumental in guiding many through the current Covid-19 Pandemic as he continually implements systems and practices to ensure the health and well-being of staff and the safety of our patients.”

Craig was absolutely astounded and humbled in equal measure when told of this recognition, “I feel extremely honoured to have been nominated and to have been awarded the Queens Ambulance Medal," he said.

"I love the job that I do and I’m so proud to be part of the Northern Ireland Ambulance Service. Throughout my career I have worked alongside an amazing team of people who have always inspired me and supported me in my role.

"I am so thankful for the many opportunities that I have had in my career and for the trust that has been placed in me by all my colleagues and all the patients and their families that I have been in contact with during my duties.

"It’s a real privilege to serve the community that I have lived and grown up in.

"I want this honour that I have received to reflect the hard work and dedication of all the staff in NIAS, who despite the many difficulties and challenges we have all faced over the past few years, continue to turn up each day and give their all to provide the best service possible to those who need us the most.”

NIAS added: "Congratulations to Craig who has received the Queen’s Ambulance Medal in this year’s birthday honours.

"This year is even more special as it is the year of the Queen’s Platinum Jubilee.

"Craig Wilson - take a bow. Congratulations from everyone in NIAS. Your family should be proud."