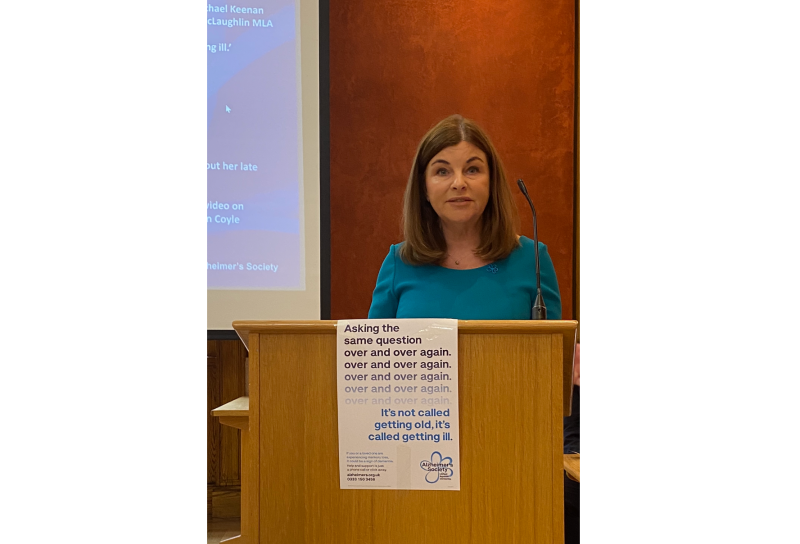 Foyle MLA, Sinead McLaughlin, has launched Alzheimer's Society's Dementia Action Week in Stormont with the goal of securing earlier diagnosis of the condition in the community.

"Memory loss could be a sign of dementia. A diagnosis can be scary, but it's key to unlocking the treatment, care and support that you deserve.

"Sadly, a third of those living with dementia are yet to have a diagnosis. Alzheimer's Society is there to help people take the first step, call 0300 222 1122."

Alzheimer’s Society launched their campaign for early diagnosis of dementia this week, ahead of Dementia Action Week (May 16 to May 22).

A new Alzheimer’s Society survey of more than 1,000 people with diagnosed dementia, carers and people without a diagnosis, found 22 percent of people in Northern Ireland lived with the condition for more than two years after first noticing their symptoms, before getting a diagnosis.

The figures also showed a further 41 percent in Northern Ireland waited between one and two years.

One of the main reasons for delay, according to 29 percent of respondents in Northern Ireland, was that they assumed the symptoms were just part of getting old. This led to a delay in accessing treatment, care and support.

In a bid to tackle the problem, Alzheimer’s Society has today launched a new campaign – ‘It’s not called getting old, it’s called getting ill’ – to encourage people worried about their own memory or their loved ones’ memory to seek support in getting a diagnosis.

The charity has worked closely with leading clinicians to make the diagnosis process easier, developing a new ‘symptoms checklist.'

This is available on their new online hub, highlighting changes that might be due to dementia.

In an emotional film released yesterday (May 16), the charity shows how the symptoms of dementia, such as asking the same question repeatedly, can easily be dismissed as a sign of old age.

“The stark findings of our survey released today show just how dangerous it can be to battle dementia symptoms alone and put off getting help.

“Yes, getting a diagnosis can be daunting, but it is worth it. More than nine in 10 people with dementia told us they benefited from getting a diagnosis – it gave them crucial access to treatment, care and support, and precious time to plan for the future.

“With the pandemic causing diagnosis rates to plunge, it’s more important than ever to seek help. You don’t have to face dementia alone, we’re here to support everyone affected.”

There are currently 22,000 people living with dementia in Northern Ireland.