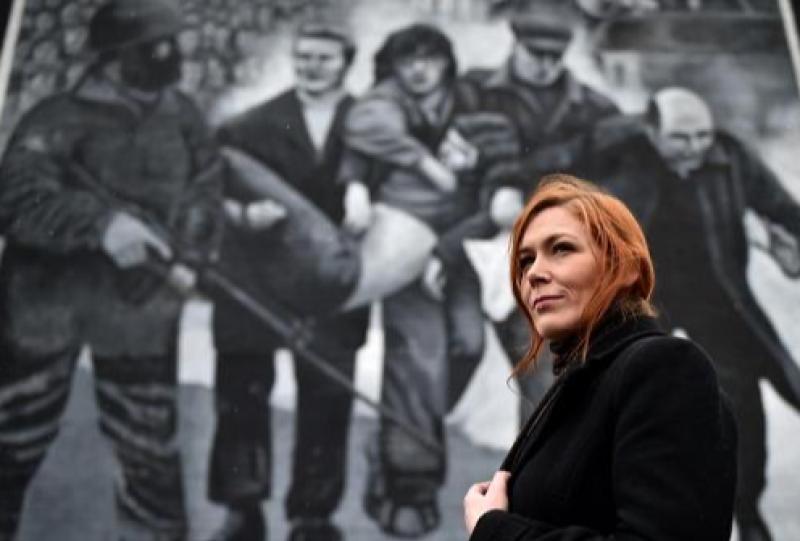 Derry author, Juliann Campbell, stands at the mural of her uncle, Jackie Duddy, who was killed on Bloody Sunday

Derry author and journalist, Julieann Campbell, recently released her new book ‘On Bloody Sunday’ ahead of the 50th anniversary of the tragic events.

The book contains a multitude of key eye witness accounts from those who were there and the voices of those lost as well as those who lost loved ones that tragic day.

Julieann’s uncle, Jackie Duddy, was one of the 13 civilians killed in January 1972 when soldiers from Britain’s 1st Battalion Parachute Regiment opened fire on a civil rights march in Derry’s Bogside.

Jackie Duddy was 17 at the time and was the first person to be killed at the peaceful march with Father Daly running at his side. 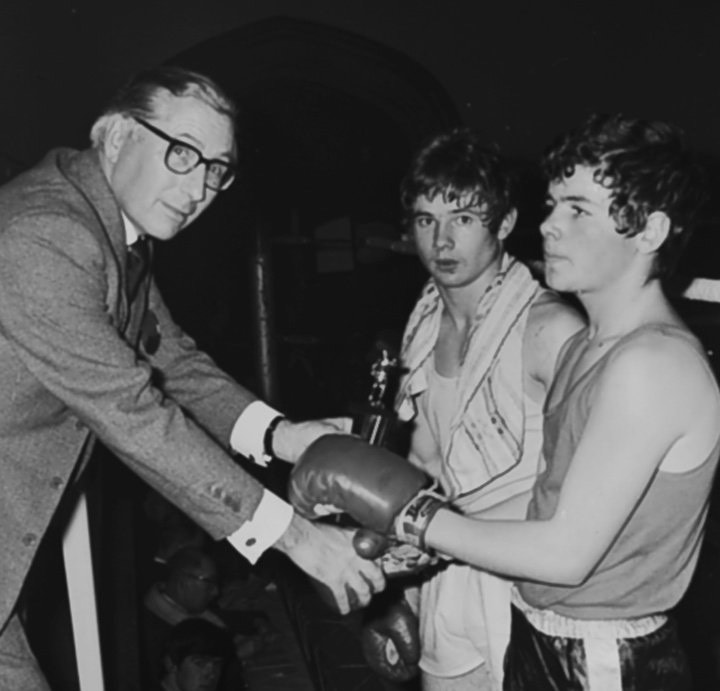 Jackie Duddy, aged 16 at the time, (right) receiving a boxing trophy at Derry's Guildhall the year before his death

Jackie was sadly the young man being escorted by then Reverend Edward Daly who waved the iconic white handkerchief.

Julieann's family had this handkerchief and have recently given it to the Free Derry Museum.

Jackie worked as a weaver at French's factory, but his real passion was boxing. He was a member of Long Tower Boxing Club, which has fought throughout Ireland, and represented the club in Liverpool.

Jackie had no interest in politics and attended the march just for the 'craic' and against his father's advice.

Julieann has spent her adult life speaking to victims’ families who continue to fight for justice and the survivors as they give their accounts on of the most pivotal moments in recent Troubles.

Julieann, a PhD researcher at Ulster University said: “The publishers contacted me about writing the book as they wanted to find someone to write the book for the 50th.

“I couldn't say no, I really couldn't. I have been interviewing these people for years. The interviews are just sitting here.

"I'm going to give them to the museum for their archive, there's no point in me just having them, they should be down there.

"I used a lot of the existing material that I had. I wouldn't bother people at this stage in their lives to say it all again when I have it already. I took stuff from the Saville witness statements and withdrew witness statements from 1972.

“That material is absolutely invaluable historical material. And so being able to use those original accounts from people, that was amazing.

“I got to include people that we've lost years ago, like John Johnson, the 14th man to die. John Johnson is in the book in his own voice. For me, who has been writing about Bloody Sunday for years, that was actually a really important part.

“It was the same for Peggy Deery, the only woman shot. We got permission from the families to use all the interviews, so they're included in the book.

"I think that was brilliant, that you could include voices that we've already lost. Also, of course, Bishop Daly, he was one of the last interviews that I've done with the museum and he sadly died not long afterwards, I think it was his last interview.

“We were very close to Bishop Daly in our house anyway, because he was one of the guys that tried to help save my Uncle Jackie.

“The famous footage of Bishop Daly waving the white hanky and carrying Jackie, that's always on TV every time Bloody Sunday is on.

"Our family is sort of surrounded by it, but we were sheltered from it at the same time in our house.

“It’s strange because I never met my Uncle Jackie but I know so much about him.”

Jackie was the brother of Julieann’s mum. He was one of 15 children.

Julieann's granny, Jackie’s mum, had passed away from leukaemia only a couple of years before Jackie was killed.

Julieann continued: “When their mammy died, she left behind really young children and then Jackie was murdered. My grandad didn’t cope well.

"All the older sisters took over the running of the house. My mum was one of the younger ones. She was around 20 when Jackie was 17. 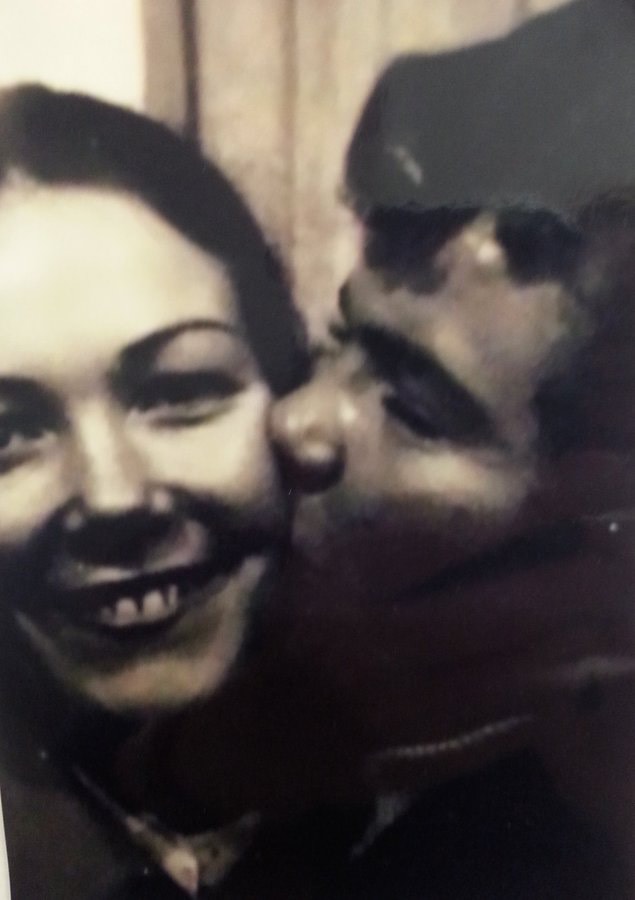 "By proxy, that means our family were sort of associated with terrorism and all the other families too. We were tarred with a certain brush that we were troublemakers.

"That's what spurred my aunties and uncles on. They didn't even campaign about it for years, the campaign wasn't until the 90s. I think Derry was just totally traumatised about it.

"While there were commemorations and loads of artistic things and books and plays, there wasn't really a campaign as such until the Birmingham Six got out and the Guilford Four and it was then that the families thought, we have a chance here.

“In 2012, I wrote a book about the campaign itself, you know how the families actually went about changing history.

“I listened to all their stories, and I just thought this book nearly writes itself. I wrote the main narrative but its power is in the voices.

“There are only about 20 new interviews in the book, ones that haven’t been published before. Two of the voices included are Hugh McMonagle, a local guy who also tried to help my Uncle Jackie.

“Hugh passed away at Christmas time there, so it is so important to have his story included. Geraldine McBride’s story is also in the book and she is such an important eye witness.

“Growing up, I lived next to my auntie who campaigned and with me being the writer, I sort of picked it up and caught the bug.

“Once I read into it when I was younger, I just felt it was so important to give people a voice. It is so horrifying and interesting at the same time.

“I think giving people and the community a voice helps people but not on its own, people need justice and they never got justice.”

Julieann said writing the book was such a fascinating experience and she feels honoured to tell the stories that are getting forgotten in time.

She continued: “I always include Gerald Donaghey’s story. He was the only one not cleared by the Saville report. He was declared innocent but they said he still had nail bombs in his pocket so we always talk about Gerald. His family needs closure.

“They searched Gerald’s body in the Bogside and they searched his pockets for ID to see who this wee boy was and he had nothing in any of his pockets. All he had was the holy medal around his neck.

“Gerald’s sister, Mary, was a strong campaigner. The families just want what's right, they just want the rule of law. I always say in interviews, it's more than Bloody Sunday.

“Bloody Sunday is just a representative case that made the headlines, because the whole world sort of saw what happened on TV and film and photos.

"But, there's so many other cases here that need to be highlighted and nobody has got proper justice or proper accountability."

The families of those killed on Bloody Sunday continue to fight for justice for their loved ones. Julieann continues to tell their stories and accounts and give them a voice.

Julieann added: "You think you're sort of hardened to the stories, after years of covering the Troubles, and then you come across a certain line and you're typing somebody’s interview and it catches you.