Derry Girls: Drama graduate, who has cerebral palsy, says his dreams came true as he plays an extra in upcoming series 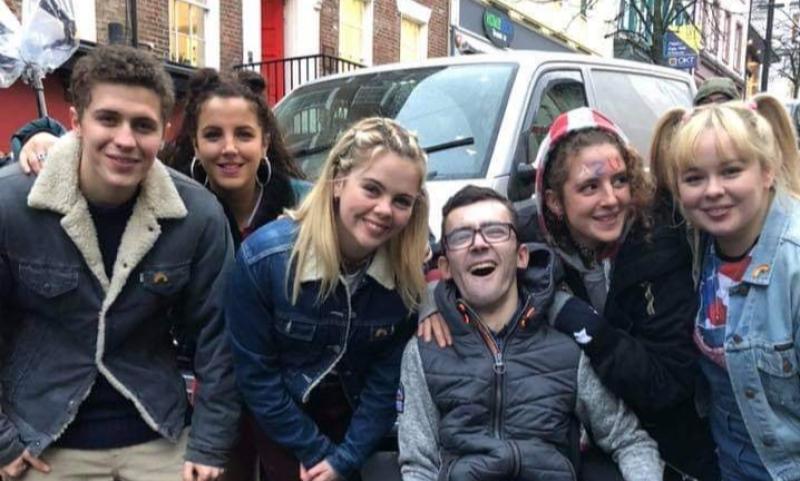 Eamonn on set with the cast of Derry Girls

Derry native, Eamonn Doherty, has filmed on set of the Channel 4 comedy show and will appear on series three of the comedy show.

Eamonn and his friend Sean McGlinchey - a former professional boxer from Derry - campaigned on social media for months.

Creator and writer of Derry Girls, Lisa McGee, saw the social media campaign and said yes to his request.

Eamonn was born with cerebral palsy which affects his movement and speech.

The 22-year-old graduated from his drama course in summer this year and wants to follow his dreams to be a writer and actor.

Speaking to the BBC, Eamonn said: "I want to inspire people to chase their dreams to write and act.

"I think it's great to show that some things are possible even if you have a disability.

"I had a massive smile on my face."

His friend Sean added: "For Eamonn to have a degree and have cerebral palsy is a massive deal for him and his family.

"He's a massive Derry Girls fan so we decided to push hard to get on it. Eamonn messaged the cast directly and I tried whatever influence I have on Twitter to contact Lisa McGee too."

"It might be a small thing to be an extra in the cast but this was a massive opportunity for Eamonn.

"We can't say anything about the scene really, but Eamonn was in a pretty prominent position so hopefully he will be seen."

Filming of season three of Derry Girls is underway in the city after it was postponed due to the COVID-19 pandemic.