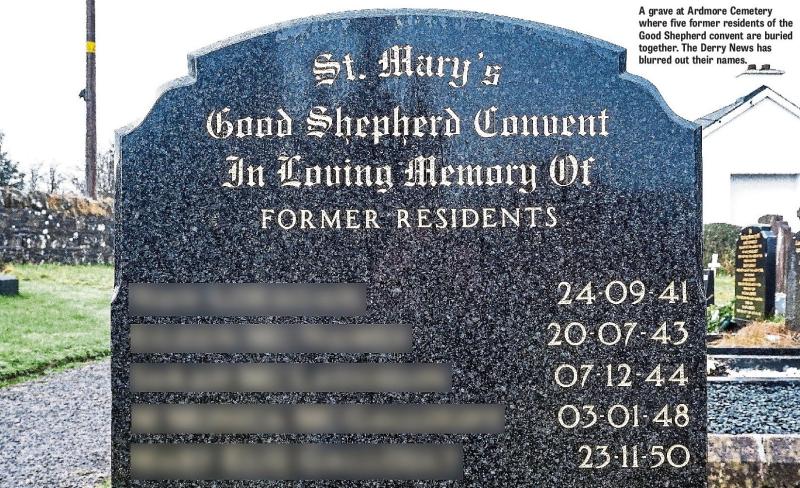 A simple headstone at Ardmore Cemetery in Derry commemorates the dates five former residents of the Good Shepherd’s Laundry died.

They, along with hundreds of others, worked in the local laundry without pay.

Some women spent a lifetime in the institution, died and were buried from there in unmarked or ‘communal' graves.

This week these women and girls, along with thousands more, were described as the ‘voiceless’ who will finally have their stories heard following the announcement of an independent investigation.

The Good Shepherd St Mary’s Laundry and Refuge was situated off the Dungiven Road in the Waterside area of Derry.

It was amongst eight Mother and Baby Homes, a number of former workhouses and four Magdalene Laundries researched by a team of academics from Queen’s University Belfast and Ulster University.

Almost one thousand women and girls worked at the Derry laundry between 1922 and 1982. 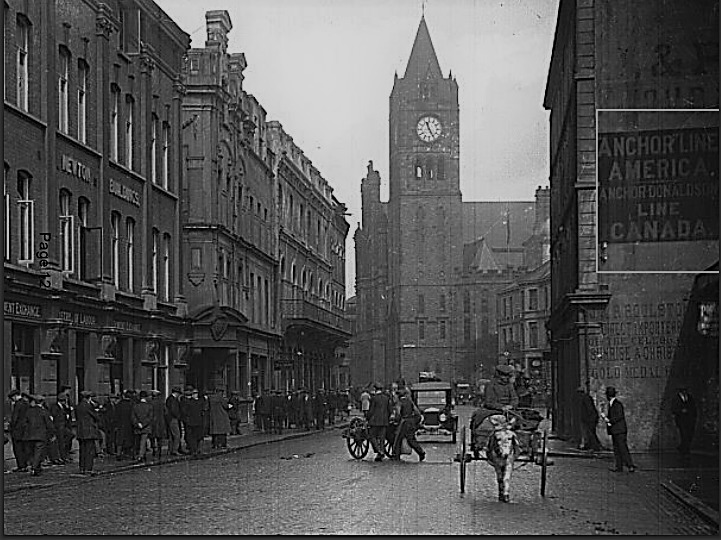 A local solicitor purchased the residence known as Bellevue with one of the sisters saying of their arrival that there were ‘concerns about female sexuality’ in a port city that became temporary home to large numbers of military personnel during the First World War’.

This was said to be a cause for concern amongst the local Catholic hierarchy.

A woman, who was identified as Sister 2, gave her testimony in the research report saying: “If I remember rightly, 1919 we … we were asked to go to Derry by the local bishop because of the war situation and all the Army that were there and all the poor girls from the Bogside you know.

“So that is why they were asked to provide protection for these women.”

The laundry was outfitted and the local Catholic community mobilised to help recoup funds.

‘Fancy fairs’ were held, concerts and comic operas, coal was donated and affluent Catholics from both sides of the border made donations.

In 1923, the Bishop of Derry, Charles McHugh, noted during Mass the significant expenses the Good Shepherd Sisters incurred ‘in order to establish an industry for the employment of the inmates and to help in maintaining the institution’.

The Good Shepherd Convent built a reputation for hosting musical events with girls from the home performing.

In 1975 Bishop Edward Daly preached at a mass, held in the Good Shepherd Convent, for the Catholic Nurses Guild.

The report says: “Taking up the theme of ‘questionable medical ethics’, the Bishop opined that Catholics needed to take a stance against abortion and sterilisation.”

According to the report, financial records do not suggest that extensive profits were made from the laundries.

However, one file does reveal that an extensive bank balance was amassed in the Derry convent by the early 1970s.

During the Second World War, lucrative military contracts resulted in a major increase in profits.

In September 1942, between sixty and seventy St Mary’s home women and girls worked unpaid in the laundry.

Money was also generated by other means, such as needlework and embroidery.

In 1940, Derry City wore a new team shirt with a crest ‘artistically done by the sisters of the Good Shepherd Convent’.

Following the development of the Welfare State, after 1948, regular payments were also received by St Mary’s Derry for girls placed in the institution by the state.

Files dealing with the finances of the Good Shepherd convents were ‘patchy’, researchers say, but one that offers detail on the financial status of St Mary’s Derry for 1973 reveals it held bank reserves of £41,000 - around £320,000 in today’s values.

It indicates that over £1,000 was earned that year from interest on investments made by the Good Shepherd Sisters in Derry.

The report states that it is not possible to assess whether this money was accumulated over several decades or whether there were particularly rewarding financial periods in which the Good Shepherd Sisters were in a position to build up the Order’s cash reserves.

Criticism of the practices at these laundries dated back to at least the 1890s on the grounds of ‘exploitation’ and the ‘institutionalisation’ of women and girls who were there for long periods.

During the 1970s the women began to receive a ‘modest amount of pocket money’ which they could spend on themselves. 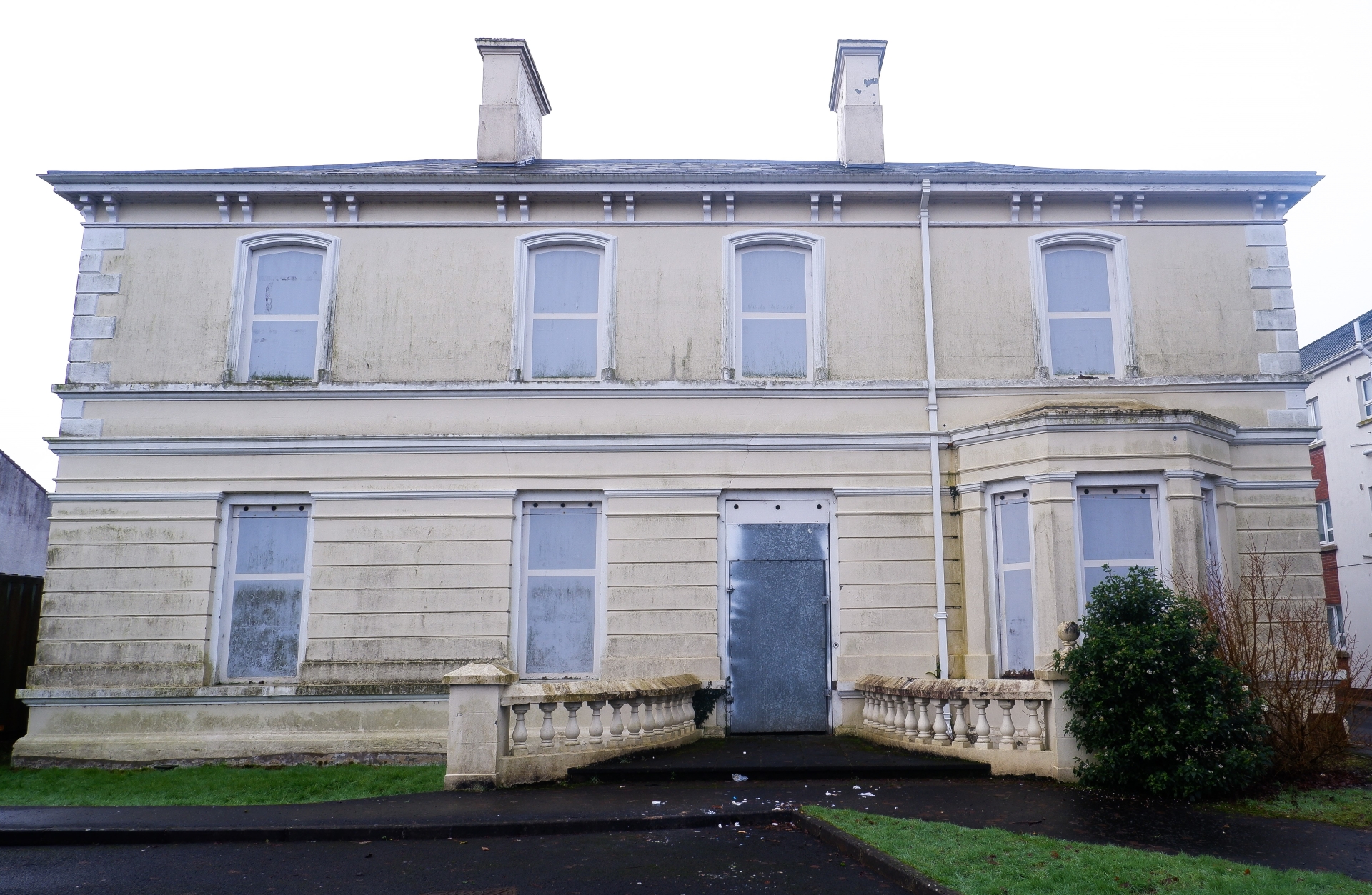 PHOTO: A boarded up building on the site of the former Good Shepherd Covent on Dungiven Road.

Individuals were sent to St Mary’s by their families, others were referred by priests and religious institutions, moved from children’s homes, ordered there by the courts and it also housed those suffering domestic abuse.

A number of teenage girls who were the victims of incest or sexual assault were also placed there.

The Historical Institutional Abuse Inquiry (HIAI), which was published in 2017, found that placing such victims there amounted to punishment.

Reasons for referrals ranged from having learning difficulties and mental health problems, being ‘socially inadequate’, having alcohol problems and being ‘unmarried mothers’ - but records didn’t show what happened to their babies.

However, a number of girls and women deemed to be in a crisis situation arising from the Troubles were sent to St Mary’s Derry.

In 1972, one person who gave an oral testimony known as A., aged 18 at the time, was brought to the Good Shepherd Convent by the police who had rescued her from being ‘tarred and feathered’.

It is not clear why she was under threat of this communal rough justice.

The following year a woman arrived at the convent accompanied by a Protestant clergyman.  She had a Catholic boyfriend and the UDA had threatened her.

In 1976, a 16-year-old known as C. was placed in St Mary’s Derry by her Parish Priest because an army officer had complained to her mother that she had been frequenting an army base.

Other referrals arose from the breakdown in family relationships brought about by the Troubles.

Over a quarter of the women and girls were from Derry City, thirty per cent were from the Republic of Ireland and the rest from other parts of NI.

Seventy-one per cent of the women and girls who entered the institution were under 23 years of age.

The Historical Institutional Abuse Inquiry (HIAI) concluded that their accommodation in the St Mary’s home was inappropriate and that there were instances where they worked in the laundry.

The HIAI report concluded that this should not have been permitted by the Good Shepherd Sisters and considered it ‘to amount to systematic abuse’.

The women and girls had a regimented culture and a long monotonous work regime.

This was particularly true for the period before the mid-1960s when few of the longer-standing Sisters had social work qualifications.

In evidence to the HIAI the Good Shepherd Sisters explained how their policy was to offer mentorship and support for girls and women in the St Mary’s homes.

But, researchers say, this task must have been undermined by the policy of re-naming new arrivals, imposing silence at meal times and punishing infringements of their rules in a cruel and demeaning fashion as judged by the HIAI.

Sisters dropped the practice of giving ‘class’ names to new arrivals in 1970.

There were also increased educational opportunities at that time but their lives were still regulated and restricted.

Newcomers to the Derry laundry feared they’d spend a lifetime in the institution like some of the elderly residents around them and were given limited explanations about their personal histories.

Sisters who worked there and priests familiar with the home maintain that the women lived ‘mainly happy lives’.

Most testimonies differ from that perspective.

Women gave accounts of being slapped, hit on the knuckles and locked in a dark room, being made to scrub floors or eat meals standing up and apologise on their knees for perceived wrongdoing.

One woman had her hair cut off as punishment.

Another woman referred to as ID - she attended two homes in the North - remembers being taken to hospital and given injections on a number of occasions.  She doesn’t know what they were for and can’t remember giving consent.

ID speculated that it was a procedure carried out on young unmarried women who had two children or more.

The research notes that a couple of testimonies share common perspectives with the Sisters.

However, the HIAI highlighted ‘systemic failures’ on the part of the Good Shepherd Sisters including forcing young girls to perform industrial work, punishing St Mary’s girls and women for ‘misdemeanours and accepting children under school-leaving age into an ‘institution that was not completely child-centred’.

In addition, it found that the state, namely the Ministry of Home Affairs/Department of Health and Social Services and the Social Work Advisory Group were also responsible for failing to carry out inspections of the Good Shepherd Homes, to take steps to ensure that school-age girls were not in Good Shepherd homes for long periods and to detect the absence of a system of monthly visits to the Good Shepherd homes. 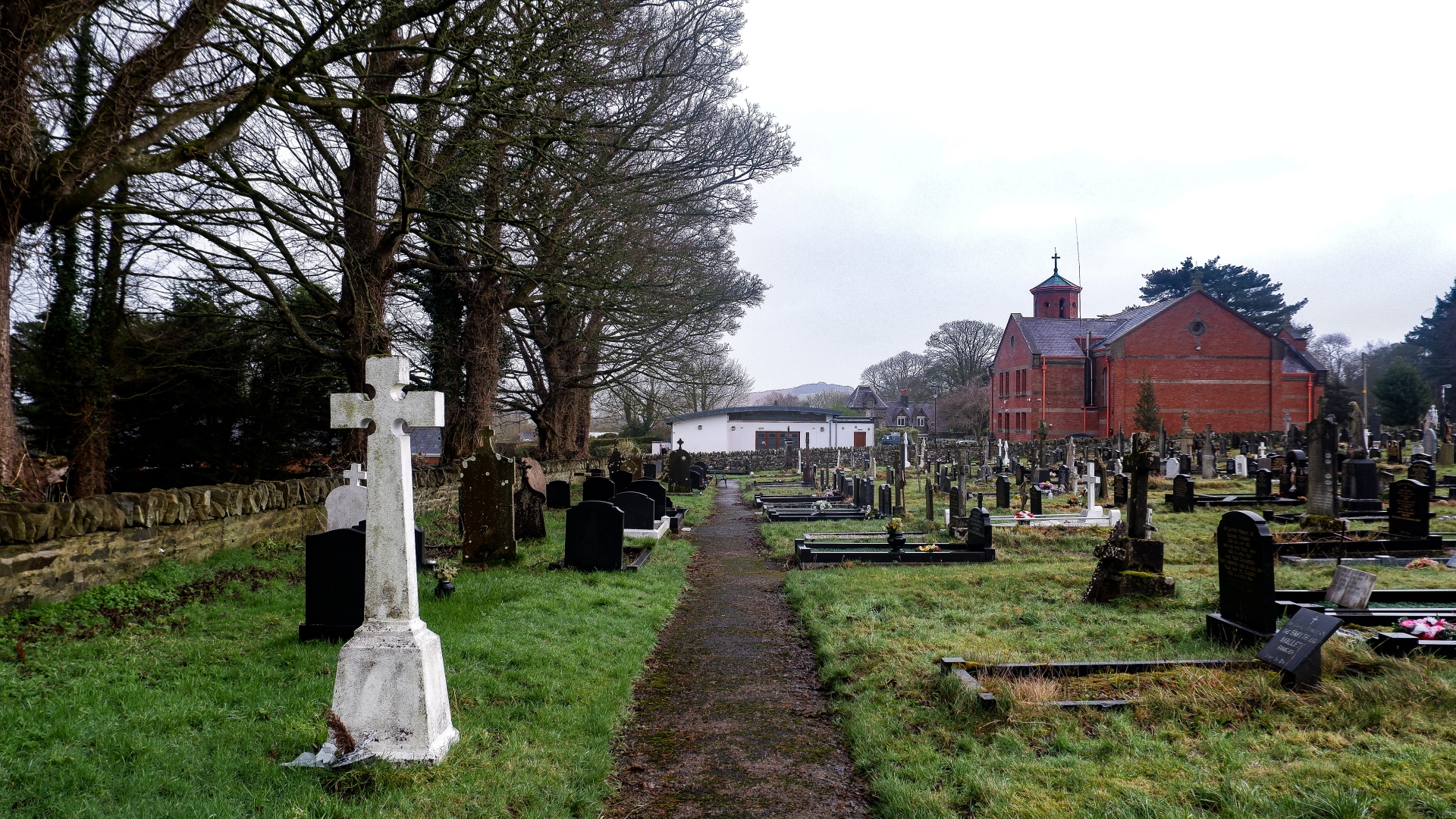 Many of the 1,000 women and girls went back to their families, were ‘sent out’, left for other convents or orphanages, 80 of them were placed in hospitals - 19 of whom ended up in Gransha Hospital.

Others left for work and some ran away.

Ardmore Cemetery was the only site of burial for women who died while working at the Good Shepherd Laundry in Derry.

A number of plots contain the remains of St Mary’s women buried in groups of four and five.

A larger plot hosts headstones recording the names of 19 women who died between 1978 and 1999.

According to the research some St Mary’s women’s burial sites are unknown at this time including that of a woman who died after an accident at the laundry in 1945.