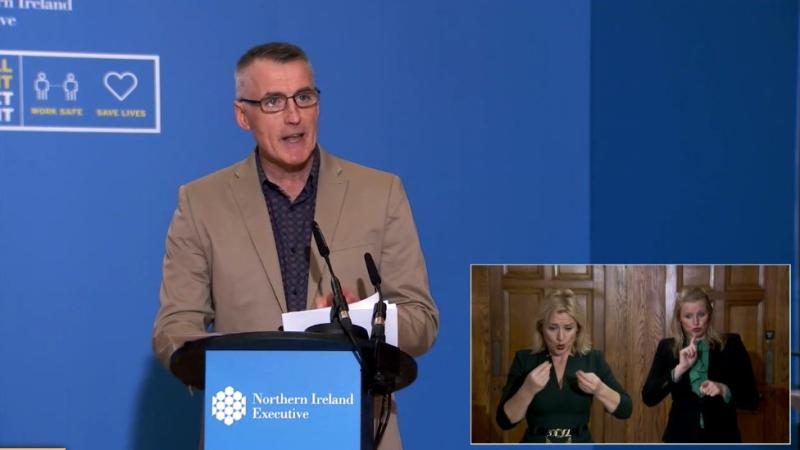 Sinn Féin Junior Minister Declan Kearney has paid tribute to the people of Derry and Strabane for complying with restrictions to drive down transmission rates.

Speaking at this afternoon's Covid briefing, he said: “The evidence that these restrictions work is already beginning to emerge in Derry and Strabane.

“Following the localised restrictions introduced in that area cases are continuing to fall and the R rate in this particular region is now below one.

“That progress would not have been made without the compliance of the people of Derry and Strabane who have gotten behind the effort to drive the infection rate down to keep their families and their community safe.”

He thanked the local community and civic leaders for their efforts thus far but added, ‘there is much more to do’.

The council area recorded 110 new Covid cases in the past 24 hours but the seven day rate per 100k of population dropped again from 669.7 yesterday to 617.2 today.

The total number of cases in the council area now stands at 4,676.

Altnagelvin Hospital has 61 Covid inpatients and one more of those patients was admitted to the Intensive Care Unit (ICU) bringing the total to six.

Aside from Covid patients there are two other individuals in ICU.

The Western Trust says it has 18 ICU beds in the hospital meaning 12 remain free if needed.

Across the hospital site however 94.72% of bed capacity is now occupied.

Meanwhile, First Minister Arlene Foster said the peak for Covid hospitalisations is likely to be within seven to ten days.

She added that the peak is expected to be similar to that seen in the spring.

The approach going forward, she said, should be built on the basis that the virus ‘will be with us for some time ahead, but that society must be able to co-exist with it’.

To do this, hospital capacity in Northern Ireland should be increased, the First Minister explained.

Details of the scheme can be found on the Department for the Economy website.