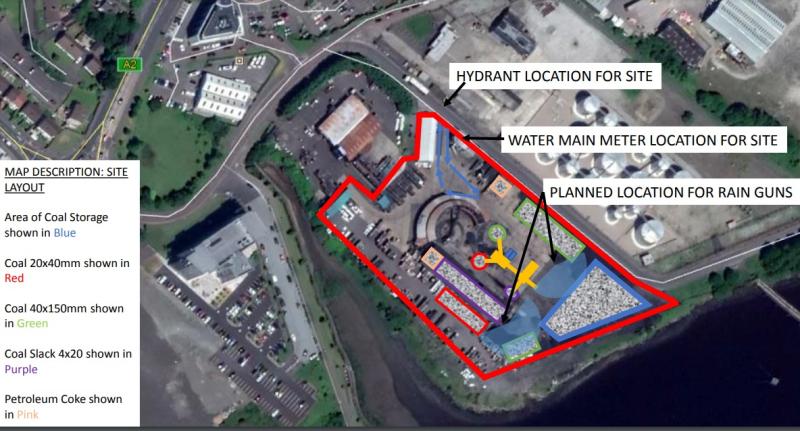 An application for a coal storage and screening facility to operate close to a popular recreational area in the city will come before the local council today.

Derry councillors have been asked to decide whether A&N Fuels NI Ltd should be granted a permit to operate at the Bay Road which has been used as a coal yard for many years.

In a report seen by the Derry News council officials neither recommend refusing or approving the application but leave it up to local representatives to decide.

However, People Before Profit, the SDLP and Sinn Féin have all been vocal in their opposition to the application.

Residents living near the Bay Road are expected to stage a protest outside the Guildhall today ahead of the Health and Community committee meeting.

The company says the yard in Derry would be used for temporary storage of coal before it is transferred to Buncrana.

Workers load it on to trucks and taken to Buncrana where it is bagged and sold.

It’s estimated that 30,000 tonnes of coal would pass through the site each year.

Ronan Grealish, Environment and Quality Manager at A&N Fuels says they may also use the site to screen coal which involves separating larger coal from smaller coal.

In addition, it could be used as a cash and carry location to sell coal.

Petroleum coke, a product used in the making of smokeless fuels, would also be stored there.

The company says water sprayers will be installed at the site to control any dust emissions and coal will be covered in tarp to reduce run off from rain water.

In addition the site will be monitored by trained personnel and CCTV, the applicant says.

In the company’s view any atmospheric emissions would be ‘minor’.

The matter was initially raised at a Health and Community Committee meeting in December of last year.

A public consultation remained open until August 26 and the local authority was given a decision date of October 19 for it to be refused or approved.

A large number of representations were received from the public as well as the Public Health Agency and the Department for Agriculture, the Environment and Rural Affairs (DAERA).

The site has been used as a coal yard historically and since July 1999 operators were granted a permit with conditions to control emissions into the air.

A revocation notice was issued to the current operator in November 2019 as the permitted installation was no longer in operation.

The council report says that the local authority has not received complaints about dust emissions from previous coal handling activity on the site.

Council officials, in the report, advise local councillors that there are regulations that allow them to either permit or refuse the application.

It adds that any decision could be appealed before the Planning Appeals Commission who could reverse the decision of public representatives.

Representations made have referred to the application being in conflict with the council’s Green Infrastructure Strategy and Greenway Development Plans, the council’s Bay Road Park Local Nature Reserve and the council’s Climate Change Pledge.

And the report cites public concern over the potential impact on health and to the environment from coal activities at the site.