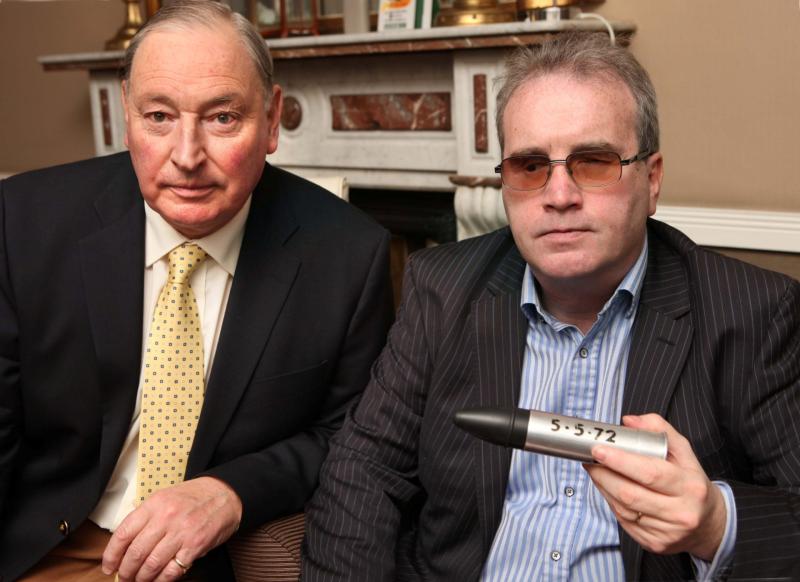 Richard and Charles have built a friendship since meeting in 2006

A Derry man who was blinded by a rubber bullet has revealed for the first time how the British soldier responsible said ‘sorry’.

Despite the years of suffering Richard Moore and his family endured, he has forged the most unlikely of friendships with former soldier Charles Inness.

On Thursday May 4, 1972, when a 10-year-old Mr Moore was on his way home from Rosemount Primary School, his life changed forever.

It came just four months after Bloody Sunday, a day on which his uncle Gerard McKinney was shot dead.

Along with friends he ran past an army lookout post, located at the edge of his school’s playground, a British Soldier fired a rubber bullet from ten feet away, blinding him for life.

It struck Mr Moore on the bridge of his nose, he lost his right eye and was permanently blinded in his left eye.

There were no riots taking place at the time but Mr Inness maintains that there were a number of disturbances in the area and he was trying to disperse the children.

After losing his sight in such traumatic circumstances, Richard returned to his old school, went on to university, successfully ran his own business, became an accomplished musician, and is married with two children.

He is perhaps best-known for founding the charity Children in Crossfire.

The Derry man didn’t harbour any bitterness towards the army veteran who shot him and always expressed his desire to meet him.

Throughout the years journalists made attempts to track down the soldier but were always stonewalled.

Documentary film-makers eventually located him and passed on a letter from Richard.

He received a response and eventually met the soldier in January 2006.

After a 34 year wait it was a highly-charged, emotional experience for the Derry man.

He flew to Edinburgh on his own and they spoke at length in an airport hotel.

“I met the man who took away my eyesight and caused so much hurt to my parents and my family.

“The gravity of it was really enormous, I knew the gulf I was crossing and it was quite monumental for me,” Mr Moore said.

Those were the first steps towards reconciliation and friendship.

Richard believes Charles was cautious at that time and didn’t want to cause any more hurt or compromise himself in some way.

The former British soldier, whose military lineage stretches back hundreds of years, felt justified in firing the rubber bullet but accepted that the outcome was entirely unjustified.

As a pacifist Mr Moore’s views clashed with the Scotsman’s but he respected his candour.

It was ‘very important’ to hear that acceptance, Mr Moore said, but at that stage the army veteran wasn’t ready to say sorry.

“Charles wasn’t saying things to make me feel better, he was being honest and straight with me.

“It’s hard to hear that, but at least I knew who I was dealing with, and I preferred that.”

Richard was elated by the first encounter and felt compelled to maintain contact.

He met Mr Inness’s family and the gesture was returned when Charles visited Derry.

Describing the esteem in which he holds his mother, a woman who suffered as much as him after the incident, Mr Moore said: “I was surrounded by so many lovely people.

“I wanted Charles to see that my mother and father were two of the kindest and loveliest people you’d ever meet in life.

“They had to endure this terrible pain and agony of watching their 10-year-old son be blinded and how I had to grapple with blindness.

“And they watched that every minute of every day and it really tugged the heart out of them.”

His then 88-year-old mother brought the man into her home who had blinded her young boy and offered him a cup of tea.

“I was immensely proud of her.  She was so kind and gentle with him, she chatted with him and told him not to worry about me as I coped with the blindness and, how, sometimes good can come out of these things.

“My mammy had enormous faith and her being able to forgive the soldier wasn’t that difficult because her faith taught her to do that.

“For me it was so important that my mammy was supportive of what I was doing.” 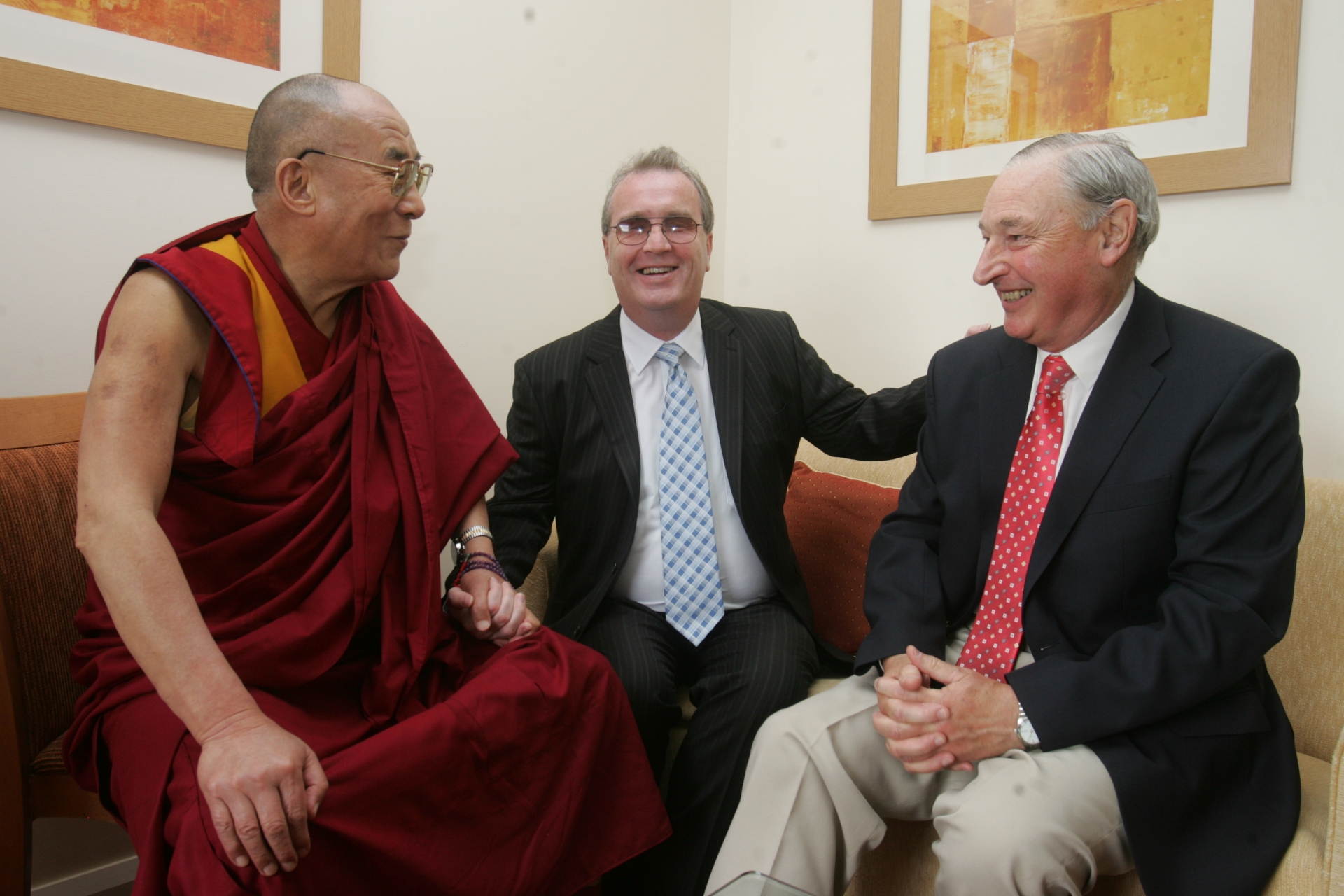 Photo: The Dalai Lama invited Richard and Charles to his home in Dharamsala to talk to more than 2,500 people.

He found it difficult to process the fact that Mr Inness was in his 30s and a Captain at the time the incident occurred rather than an inexperienced young soldier.

But he believes that true reconciliation should be based on accepting the individual for who they are and not who you want them to be.

At first Mr Inness couldn’t find it within him to say ‘sorry’ as he felt that was akin to accepting that he did not mean to fire the bullet, a logic Mr Moore couldn’t quite understand.

Hearing that word wasn’t a prerequisite for friendship as Mr Moore forgave Charles ‘unconditionally’ before they met.

“The blinding of a 10-year-old boy is wrong as far as I’m concerned so there’s no conflict in my mind about that, what he did was dreadfully wrong.

“But I didn’t need him to say sorry, this is my own opinion, if I hadn’t been able to forgive Charles unless he said sorry then I believe I’m giving Charles a certain amount of power over me, that I am unable to move forward until he says it.

“It was almost like handing him a key to a chamber in my heart and head that only he could unlock.

“So sorry wasn’t a blockage for me.

“The journey would never have happened if I’d set those preconditions,” he reflected.

Privately Mr Inness apologised around six years after they met in 2012 and when he said it Richard nearly fell off his chair.

Until now it was unknown but both men agreed that the time was right to make it public knowledge and to speak openly about it.

“I didn’t think I needed closure but it has come with it and it is nice that it has happened,” Mr Moore concluded.