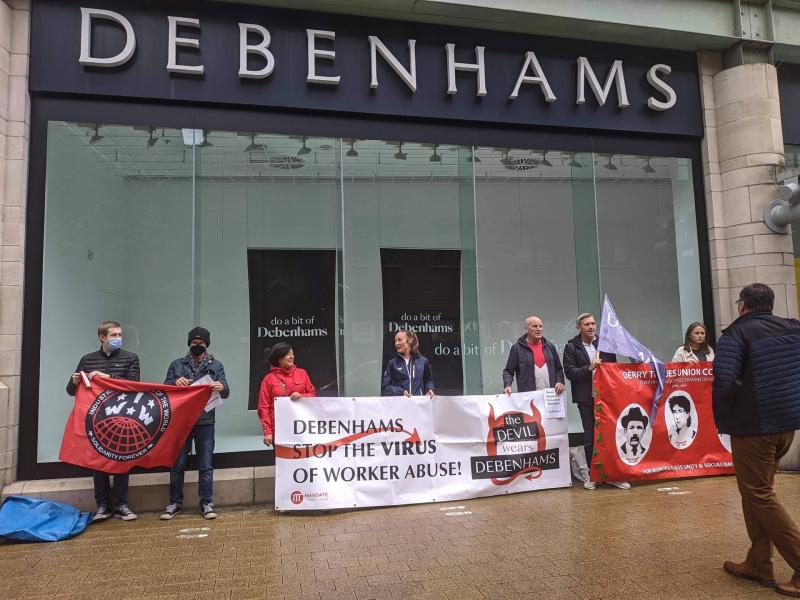 'No update' can be provided on the long-term future of Debenhams department store in Derry, according to a spokesperson for the company.

In April of this year Debenhams announced that administrators had been appointed to 'protect the business'.

It aimed to open as many stores as possible once Coronavirus restrictions were lifted.

However, the company said that it would liquidate all 11 stores in the Republic of Ireland and they were not expected to reopen.

More than 1,000 Debenhams workers in Ireland were notified that they’d lost their jobs.

The Taoiseach Micheál Martin said the company has treated its Irish workers in a 'very shabby way' in depriving them of redundancy entitlements and he believes the law must be re-examined.

The Foyleside store reopened once permitted to do so by the government.

Today, the Derry News asked Debenhams if the long-term future of the store in Derry has been secured at this stage and whether it expects any jobs to be lost due to the COVID-19 crisis.

In response a spokesperson simply said there have been 'no updates' since the store reopened.

At the weekend, Debenhams workers from as far afield as Cork protested outside the Debenhams store on Foyle Street in Derry to make consumers aware of what they described as their employer’s 'despicable' actions.

However, Mandate Trade Union says the company didn’t set aside finances to pay the workers their agreed redundancy package, having transferred valuable assets to the UK parent company.

Valerie Conlon who worked in the Debenhams store on Patrick Street in Cork for 24 years said: “We are not going to let this company just walk away and not pay. We’ve given decades of service and helped make huge profits for Debenhams so for them to just abandon their responsibilities is a disgrace.”

She added: “We will be making everyone aware of how Debenhams treats its workers, and if that means traveling six hours to Derry, so be it. If they can do this to us and get away with it, how do we know it won’t be the workers in Derry next?”

John Douglas, Mandate General Secretary said: “I have to commend these workers for standing up and fighting back against their despicable treatment. They’ve travelled to Belfast, they’ve protested outside the Dail, they’ve stood on picket lines all across the country and they’re not going to back down.

“These workers have a combined service of over 10,000 years. They deserve a satisfactory resolution to this dispute and the company knows what it needs to do. Pay the workers the redundancy they are owed. If they don’t, Mandate Trade Union will continue to support the workers as they campaign for justice.”

"Fast forward to 2020 and another 2000 workers face the same situation as Debenhams retail Ireland closing 11 stores.

"Retail workers will face growing uncertainty over jobs as we attempt to come out the other end of COVID-19.

"DTUC encourages all retail workers in the city to get organised, join a trade union and begin to strengthen the resistance against the self interests of big business.

"The demand to strengthen workers rights through more effect legal frameworks must also be met.

"In the meantime it is imperative everyone stands with the Debenhams workers, in their fight for a decent redundancy package and to be treated with respect and dignity."