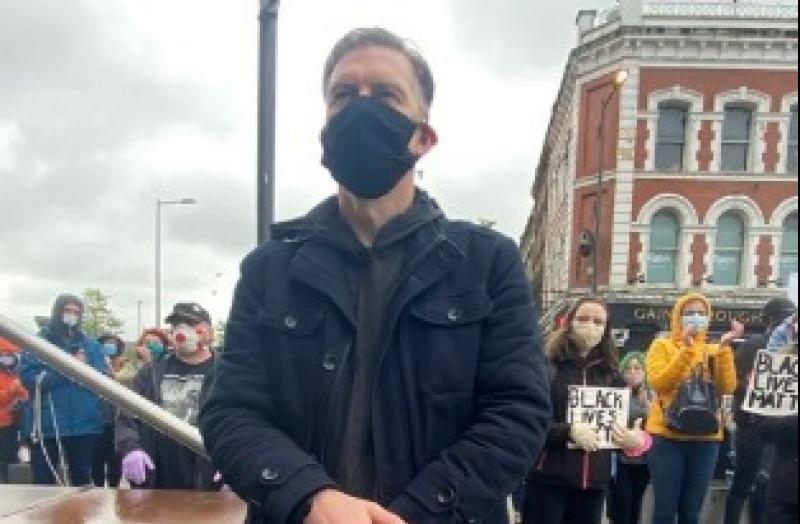 A Derry councillor has criticised nationalist parties for 'blatant political hypocrisy' for what he 'endorsing' the actions of police at the Black Lives Matter protests.

People Before Profit Cllr Shaun Harkin said: "Sinn Féin and the SDLP claim to be parties committed to opposing racism and to supporting civil rights.

"Cllrs in both parties supported People Before Profit's motion in the Derry and Strabane Council condemning the PSNI's racist targeting of the Black Lives Matter rallies in Derry and Belfast and calling for all fines and threats of prosecution to be dropped.

"But this week in Stormont Sinn Féin and SDLP MLAs joined with the DUP and others to vote through Amendment 5 of the Health Regulations giving retrospective endorsement to the PSNI's crackdown on the socially-distanced Black Lives Matter protests.

"Voting down Amendment 5 gave Sinn Féin and the SDLP the opportunity to undo the racist criminalisation of the Black Lives Matter protests. Instead they voted to endorse PSNI political policing. In doing so they trampled on civil rights.

"To add further insult Sinn Féin and the SDLP Cllrs forced through an amendment to a People Before Profit Black Lives Matter motion in Belfast City Council this week stripping out opposition to fines and threats of prosecution. Both parties backed these demands in Derry and Strabane Council.

"This is blatant political hypocrisy that many people will never forget. It is a defining moment in Derry and across the entire Ireland.

"We will continue to expose the double-standard racist treatment of the BAME Community and the Black Lives Matter protests. We'll continue to campaign for all the threats of prosecution and fines to be dropped."
--