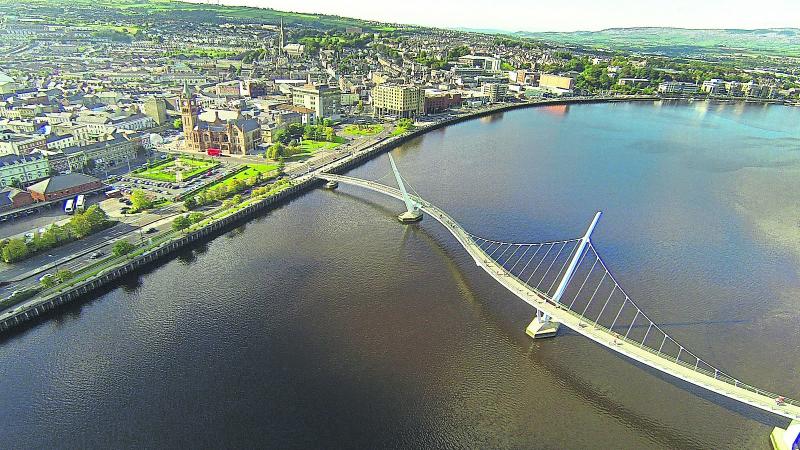 Representatives in Derry have welcomed the announcement from the NI Executive of match funding which will see an economic boost of £210m into the North West.

Speaking in Westminster in November 2014 Mark Durkan made the case for a City Deal for Derry.

"In my own constituency, people would love to see city deal status even within our devolved settlement for the city of Derry.

"We need to look at this in a more fluid way and to get away from the politics and find the democracy," he said.

Today, SDLP Leader Colum Eastwood has welcomed the announcement of Executive match-funding for City Deals after the party first raised the proposals over five years ago.

Colum Eastwood MP said: “The SDLP has been fighting hard for fully charged City Deals with the power and potential to transform the North’s economy for over five years. Despite the initial disinterest from the Executive, we have always maintained that these deals would have a significant impact on our ability to reimagine infrastructure, attract new jobs and stimulate economic growth.

“In the talks that restored the Executive, I made it a personal priority to secure resource for university expansion in Derry. Investing in skills and providing our talented young people with the opportunity to live, work and set down roots here is essential to building sustainable communities that thrive.

“This has been a long time coming. We have been forced to wait for far too long for the chance to build more for our people and our communities. Now that we’ve secured the potential of the City Deal, we can’t take our foot off the pedal. We need to turn the page on the years of neglect and underinvestment by expanding our university, investing in our young people and delivering new opportunities.”

Executive confirmation of a multi-million package for Derry has been warmly welcomed by Sinn Féin MLA Martina Anderson as ‘transformative for the entire north west region’.

“This is a hugely positive day for the north west and represents the culmination of a great deal of work over the last number of years,” Martina Anderson said.

“Confirmation of the match funding means we now have a package of £210 million between the City Deal and Inclusive Growth Deal.

“This package will be transformative for the entire North West region and required the collective attention and action of the Executive, both governments and other partners.

“Following years of unrelenting Tory austerity which has deprived Derry, Strabane and the wider region of much-needed public services and investment, we can see the clear benefits of having a local Executive in place.

“Crucial to this has been the role of Sinn Féin Finance Minister Conor Murphy and his determination to ensure that this administration redresses regional inequalities by investing where it is required.

“While we will always have much to do, particularly in the face of a global pandemic crisis, this funding and last week’s rescue package for City of Derry Airport will be central to our economic recovery when the crisis has ended.

“It will also be fundamental to ensuring we realise the vast economic potential of the entire north west region in the longer term.”

Mr Middleton said, “I wholeheartedly welcome the announcement today of match funding for the Londonderry and Strabane City Deal and Inclusive Future Funds. This doubles the total funding pot to over £200million, adding to the funding already secured through the UK Government.

This will allow for progress on some of the key projects such as the Maritime Museum at Ebrington, the Walled City Experience and the redevelopment of Queens Quay.

The DUP ensured that City Deals were part of the Confidence and Supply agreement in 2017 with the aim of ensuring that all of Northern Ireland benefited. The additional funding for all City Deals announced today is welcome news during this difficult time.

I particularly want to put on record my thanks to my party colleagues within the executive and all parties who worked collectively with all of the key stakeholders over the past few years to get this over the line. This is a significant step forward.”