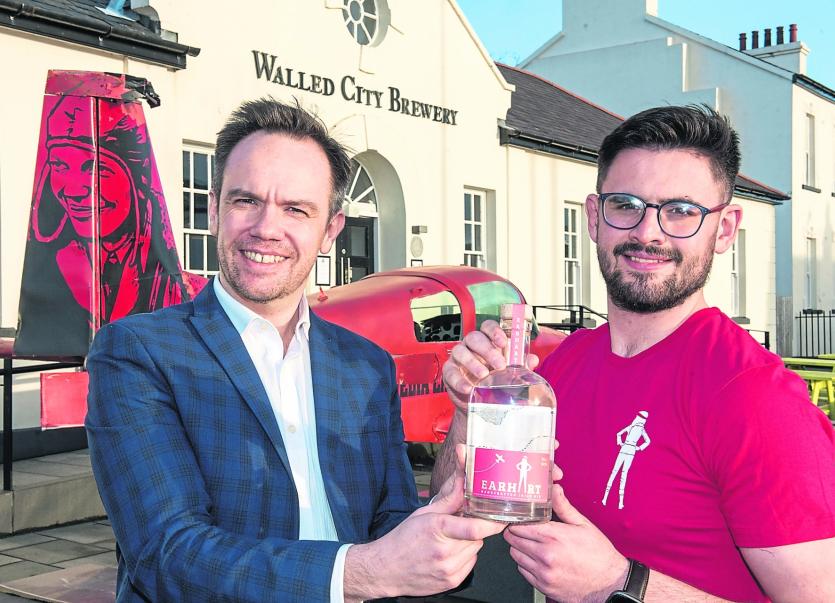 The amazing exploits of American aviation pioneer Amelia Earhart are being commemorated in the first ever Derry gin.

The new 'Earhart Gin' is named after the world-famous aviatrix Amelia Earhart, who became the first woman to fly solo across the Atlantic.

Taking off in Newfoundland, she originally planned to complete her epic 16-hour flight in Paris but suffered technical problems, and landed in the Cornshell fields in Culmore on the outskirts of Derry in May 1932.

“We’re incredible excited to be launching Derry’s first ever gin.

“There has been a huge increase in gin sales globally over the last 10 years, and we are keen to put Derry back on the map as a producer of world-renowned spirits.

“Our creative director Brigid Johnson has designed an iconic brand identity which will stir up our passion for Amelia and her astonishing achievements,” added Mr Huey.

Recipe
Josh Kyle was also involved in the creation of the new drink.

“We’ve spent nearly a year developing the recipe with a secret blend of classic gin botanicals such as juniper, coriander, pink peppercorns and angelica root.

“But we wanted to truly reflect Derry by hand-foraging some unique wild botanicals from the meadow she landed in, and added hawthorn berry, elderberry and a gorgeous native flower called purple saxifrage.

“The aroma and flavour from these are truly amazing. We’ve also used our mixology experience in the restaurant to develop some gorgeous new cocktails using the Earhart Gin. ‘New Foundlove’ is a stunning local apple-based gin cocktail, whilst ‘Little Red Bus’ is named after Amelia’s own nickname for her bright red plane and is a fabulous twist on the classic Bloody Mary.”