“We outlined the challenges we face in the current economic environment and stressed the difficulties we are experiencing in attracting new airlines and routes, in common with other smaller regional airports" 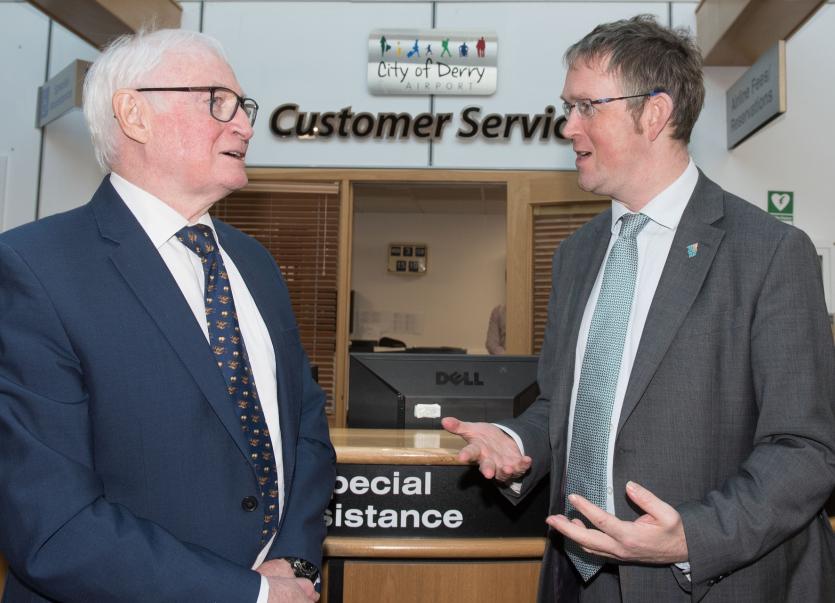 Chairman of the City of Derry Airport Board, Albert Harrison, pictured welcoming Aviation Minister Paul Maynard to the airport yesterday during his tour of regional airports

The Aviation Minister Paul Maynard visited the City of Derry Airport yesterday as part of his UK tour of regional airports as he carries out the Regional Air Connectivity Review.

Welcoming the visit and the opportunity to participate in the government’s review of regional connectivity, the Chairperson of the CoDA Board, Albert Harrison, said the meeting with the Minister had been positive.

He said: “City of Derry Airport plays an integral role in making Derry-Londonderry and the wider North West City Region a more attractive and competitive proposition for inward investors, contributing to the development and growth of the region’s tourism potential, whilst also delivering economic and social benefits to local communities and the North West Region as a whole.

“The meeting today with the Minister provided us with the opportunity to outline to him the airport’s strategic aim to provide improved connectivity and frequency of flights to major business hubs, and to improve connectivity and boost economic growth for the wider city region by increasing access.

“We outlined to the Minister the challenges we face in the current economic environment and stressed the difficulties we are experiencing in attracting new airlines and routes, in common with other smaller regional airports. We highlighted the need for Government intervention, both in the form of funding assistance to and reduction in tax burdens on airlines to attract new routes.”

Concluding, Mr Harrison thanked the Minister for including the City of Derry Airport on his tour of regional airports, saying that CODA welcomed the opportunity to participate in the government’s review of regional connectivity.

WATCH: Liam Óg Hinphey on the importance of reaching out

Grease will one of the films being screened.

Sperrin Harriers take on the world