SDLP leader indicates his party will go into opposition unless the needs of Derry, such as Magee expansion, are met first 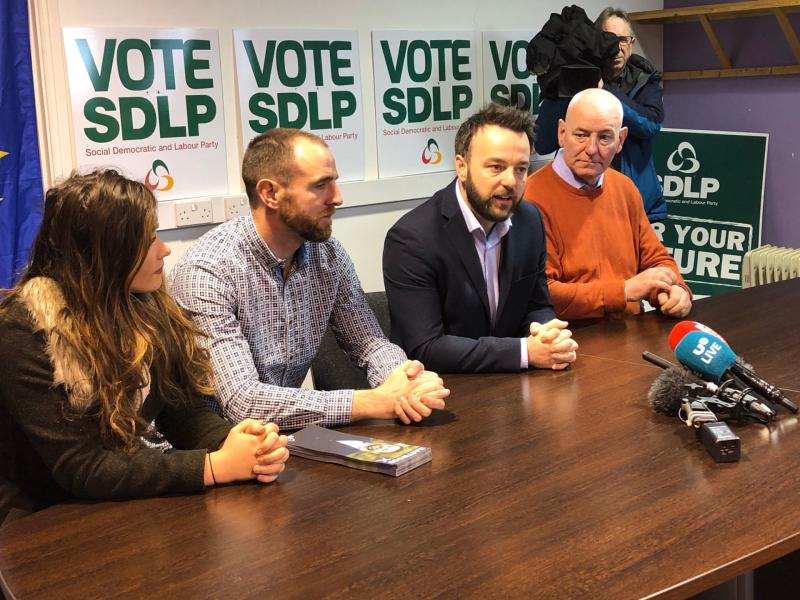 SDLP leader Colum Eastwood has indicated that in the event of a Stormont government being formed this week his party will go into opposition unless the needs of Derry are met first.
Speaking to the Derry News following a press conference on Friday, Mr Eastwood insisted that all parties must be involved in this week’s scheduled talks process.
At Westminster Brexit will be the first issue on the agenda and trying to protect Derry. But in terms of other issues facing the city, Mr Eastwood said he will argue for “properly directed investment” in the city that will require a Stormont government.
“We have been failed by people who have run the government here for too long and it’s time to get that fixed,” he said.
Voters in the North, and in Scotland, rejected Boris Johnson but he did express disappointment at the overall result which secured a large majority for the Conservative party.
“In politics you have to play the ball where it lies, we did our bit, others didn’t, but we have to find a way of protecting ourselves.”
Talks are set to resume at Stormont and the Derry man suggested he is prepared to go into opposition if the city’s interests are cast aside.
“After the last Assembly election there was a change because of the Fresh Start Agreement which meant you had to have a negotiation and a programme for government. We went into that negotiation determined to get Magee expanded, more social houses built and a few other things, and they weren’t asks that should’ve been hard to deliver.
“The DUP and Sinn Féin refused to even negotiate with us on that basis so we said well see you we’ll go into opposition to try to argue for those things from that position.
“They know that if they want an all-inclusive government then they have to look after the people of Derry first.”

The SDLP leader said he knew the party was doing well during canvassing but didn’t think he would win by such a large margin, billed as a “tight fight”, that’s the way they treated it.
On Friday Mr Eastwood entered a room above the Pickled Duck café along with his wife, Rachael, and daughters to applause from his party members and supporters.
He began by thanking his team. “A couple of years ago when we lost this seat, we didn’t fold up the tent, we didn’t walk away quietly. We became very determined that this city’s representation, not just for us, not at all for us in fact, but for the people of Derry.
“I think we’ve been starved over the last couple of years of representation, I wish we had MPs when they were very tight votes on Brexit. But we have a fight on our hands now and we have to fight against Boris Johnson who now has a Tory majority, he will do all sorts of negative things for the people of this city and we have to be there, not just speaking but voting against him and taking the fight to this new Tory government.
“And I pledge on behalf of the people in this room and the people of Derry to take that fight right to the heart of Westminster.
He continued: “We heard very loudly on the doors what people wanted, they wanted representation at Westminster and their voice heard but they also wanted government in Stormont and people to deal with the crisis in our health service. They don’t think it’s good enough for people to stand on picket lines and then not go to work the next day to try to sort out the problems faced by our low-paid health workers.”
He also highlighted teachers who are having to bring the most basic resources to school because there is no education budget.
“People in this city know the old story of Derry, that generations of our people leave here and don’t come home because there aren’t enough jobs, because previous Executives haven’t invested in our university to attract and keep those jobs. That’s the work that we have to be engaged in now, we don’t take one vote we got for granted, we know the work that we have to be about and that work starts on Monday morning.
“This party is very grateful for the huge endorsement that we’ve got, but we know it’s not about us, we know it’s about the people of Derry roaring a message to politicians that ‘it’s time to get on with the job’. And we’re very grateful for people from right across the political divide for coming and rallying behind us and I just want to say to them, we won’t let you down.”

Mr Eastwood will attend Westminster tomorrow. Making reference to other results across the North, he said it is about people “raising their voices against Brexit and for a sensible accommodation to bring people back together again.”
The Secretary of State for NI Julian Smith knows “we have to get back around the table urgently…we heard it loudly and clearly, let’s get back to work,” he added.
“Everybody in this room either is on a waiting list or knows someone who’s on one. It’s a terrible inditement of our politics and it’s time we fixed it. Everybody in this room has had a member of their family, or many members, leave this city because they just can’t make ends meet being here, that’s a terrible inditement of our politics.
“Everybody in this room knows what has to happen, we have to take responsibility, we have to take power in our hands to deal with the problems faced by our voters. No longer is it good enough to stand on the side lines, no longer is it good enough to look in the window, we have to be in there, that’s what people want us to do, that doesn’t just mean Westminster that means Stormont as well so let’s get on with it.”