Services were postponed at Altnagelvin Hospital yesterday as nurses continued with industrial action over safe staffing levels and pay parity. 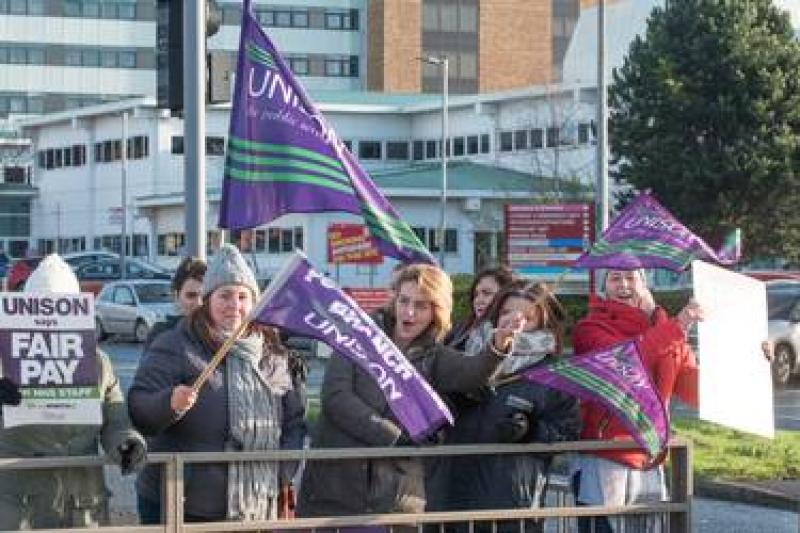 Health workers on the picket lines at Altnagelvin Hospital.

Services were postponed at Altnagelvin Hospital yesterday as nurses continued with industrial action over safe staffing levels and pay parity.
While the latest 48 hour period of industrial action ended yesterday, there is now less than a week to go before all out action on December 18 unless a resolution to the dispute can be found.
Royal College of Nursing members held a meeting at the Derry Hospital on Wednesday and similar meetings took place between nurses at nine other hospitals over the lunchtime period.
The Western Trust had already confirmed there would be an impact on “some services”.
A spokesperson expanded: “There may also be some disruption as ‘action short of strike’ continues. Once again, we apologise to all patients and service users affected.”
Services affected yesterday included, pathology/laboratory, a number of Occupational Therapy appointments were postponed Trust-wide, as well as a number of outpatient appointments.
“If patients have not been contacted, they should assume their appointment is going ahead. Any postponed appointments will be rescheduled. There is no need to contact the hospital as these will be rescheduled automatically,” the spokesperson added.
Nursing staff who are members of the Royal College of Nursing (RCN) across all Health and Social Care services in Northern Ireland took industrial action, short of strike action, to demand safe nurse staffing and pay equality.
RCN Northern Ireland Director Pat Cullen said: “The last thing that any nurse wants is to take industrial action. However, nurses now feel that they have no choice.
“With around 2,800 vacant nursing posts in the system, record levels of expenditure on agency staff to try to plug the gaps, and nurses’ pay continuing to fall further and further behind the rest of the UK, nursing staff have had enough.
“Today, our members will be on duty as normal, providing direct patient care, but will work strictly to their contracts of employment. This means starting on time, finishing on time, taking contractual breaks and not performing the non-nursing duties that they should not be performing anyway.
“Last week a number of members reported back to us that last Tuesday was the first day in a very long time they could remember feeling that they actually had the time to care for patients in the way they would like to every day.
“This in itself tells us why RCN members feel it is necessary to take this action in the first place.”