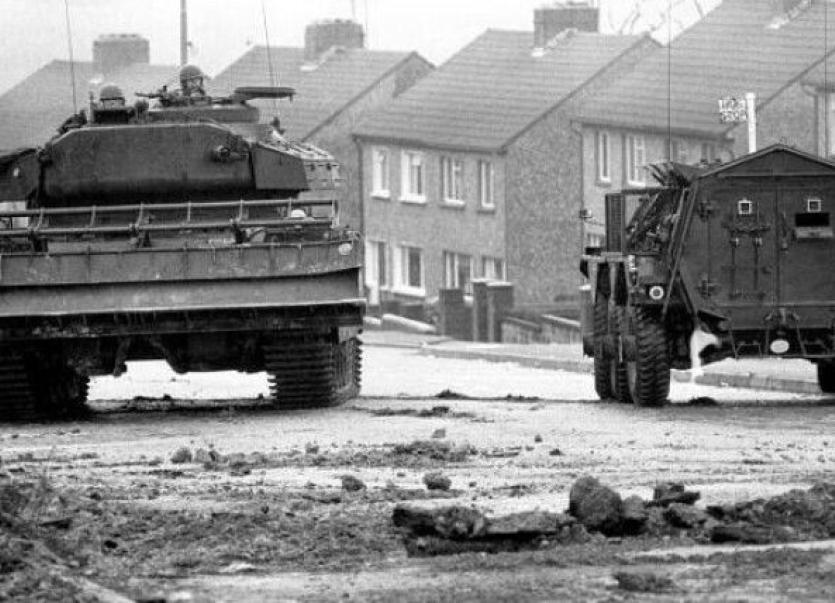 A Centurion Tank makes it way into Creggan during Operation Motorman on July 31, 1972.

A move by the Ministry of Defence (MoD) to quash inquest findings into the killing of a 19-year-old IRA member shot dead by the British Army during Operation Motorman in Derry in 1972, has been described as “unprecedented” and “politically motivated” by a lawyer representing the family.

And, a SDLP MLA has said that if an apology for the killing had not recently been sought, it is doubtful whether the MoD would now be seeking a reversal of the court’s findings in the case.

In August this year the Coroner’s Court determined that the shooting of Seamus Bradley in Creggan 47 years ago was ‘unjustified’, supposedly bringing a decades long campaign to clear his name to a conclusion.

However, in recent days the MoD has lodged a request for a judicial review of the inquest findings in a bid to quash the conclusions in the case presided over by Judge Patrick Kinney. The Ministry is also seeking to force another inquest into the case. If the application proves successful, it will be the third inquest into the killing since the original one held in 1973.

The shooting of Seamus Bradley at Bishop’s Field on July 31, 1972 came amidst the largest deployment of British land forces since the Suez Crisis of the 1950’s. Over 25,000 soldiers were used to clear the so-called ‘no go’ areas in Derry and Belfast from open control by both factions of the IRA.

As a result of their incursion into Creggan in the early hours of the morning, Mr Bradley and 15-year-old Daniel Hegarty were shot dead.

In April this year the Public Prosecution Service announced that a man known only as Soldier B is to be charged with the teenager’s murder after the High Court overturned a previous decision not to prosecute. The ex-serviceman is also to be charged with wounding Daniel Hegarty’s cousin Christopher who survived being shot in the head at close range by the same man.

The circumstances in which Seamus Bradley’s life was taken was hotly disputed for decades.

The British Army contended that the Provisional IRA man had been perched in a tree and holding a sub-machine gun when he was shot at least four times by Soldier 1 of the Royal Scots Regiment between 5.15 and 6.15am on the morning in question.

Mr Bradley’s family however continually maintained that the victim had been removed from the scene, physically tortured and then denied medical assistance which contributed to his death.

The coroner however rejected both these versions of the events and determined the victim had been shot by a soldier who got out of a Saracen, fell to one knee and shot Seamus Bradley several times The findings of Judge Patrick Kinney were aided by the testimony of Raymond Carton who gave the inquest an eyewitness account of the events.

In delivering his findings in August the judge concluded that Seamus Bradley was running across Bishop’s Field away from a British Army Saracen and did not have a weapon; he could not have reasonably have been perceived as posing a threat of death or serious injury; the use of force by the soldier was entirely disproportionate to any threat that could have been perceived; the soldier who shot Seamus Bradley did not adhere to the terms of the Yellow Card rules of engagement and that the soldier was not justified in opening fire.

In another section of the inquest findings, the coroner also stated: “Seamus Bradley was collected by the same Saracen and taken to St Peter’s School which was a designated aid station. He died en route to that station. No first aid or medical assistance was provided to Seamus Bradley by the soldiers. If such aid had been provided then there was a reasonable prospect that Seamus Bradley may have survived the shooting.

“Seamus Bradley was not mistreated by military personnel in the Saracen in the form of physical assault, torture or shooting. However, he was denied even the most basic form of first aid treatment. Operation Motorman was not planned, controlled or regulated in order to minimise to the greatest extent possible, the risk of life, principally because of the lack of planning for casualties, both civilian and military..” and, “the investigation into Seamus Bradley’s death was flawed and inadequate.”

The High Court received the MoD’s application for a judicial review of the inquest findings on November 14. The 25 page document obtained by the Derry News states: “The Coroner’s verdict is irrational in that it necessarily involves the rejection of the credible, consistent and corroborated accounts from the military witnesses in favour of an uncorroborated account from Mr (Raymond) Carton, provided for the first time in 45 years…in accepting the Carton account the coroner has, necessarily, rejected the entirety of the military evidence.”

It was also determined that the soldier who fired the fatal rounds could not be identified.

In seeking a route to quash the coroner’s findings the MoD also refer to Seamus Bradley’s membership of the IRA and the fact that his headstone and a memorial to him in Creggan state that he was “killed in action”, in a clear attempt to back up the British Army’s contention that he was armed.

The MoD is also contending that the Coroner made mistakes in evaluating the ballistic evidence presented by them and in also in relying upon evidence given by an independent ballistics expert and that the Court “erred in its evaluation of the photographic evidence and grid references in relation to the location of the tree, occupied by the gunman, and identified by the soldiers at the time. The court erred in failing to evaluate the photographic evidence that corroborated the military version of events.”

Seamus Quigley, lawyer for the Bradley family described the MoD’s application for a Judicial Review with a view to a bid to quash the Inquest findings as “quite extraordinary” and “unprecedented” in relation to the outcomes of Troubles legacy cases in Northern Ireland.

Speaking to the Derry News, Mr Quigley said: “I have the impression that the whole thing is being driven by the Army. I think the biggest difficulty they have here is that the Coroner recommended that a file on the case be passed to the Public Prosecution Service.”

Referring to recent British Government pronouncements, including those by Prime Minister Boris Johnson, on potential legislative moves to block future prosecutions of British military personnel, Seamus Quigley said he feels the development in the Bradley case has seen the MoD enter the realms of politically motivated decision making.

Under recent proposals, the Conservative Party says that if it’s returned to power, it would amend the Human Rights Act in the UK so it does not apply to issues – including Troubles related deaths – which took place before it was enacted in 2000.

Mr Quigley added: “The mood music around this issue has been quite aggressive in terms of any former soldier being prosecuted for anything. I’m not particularly referring directly to this case, but I’ve noticed that the public relations around it appears to be election fuelled.”

SDLP MLA Mark H Durkan has also been involved in backing the family of Seamus Bradley throughout the drive to get the 1972 state forces killing scrutinised via a fresh Inquest. Following the findings laid down by Judge Kinney in August, Mr Durkan wrote to the MoD at the request of the Bradley family seeking an apology from the British Army for the killings.

The MLA received a reply from the MoD on October 22. The letter signed by minister in the defence department, Johnny Mercer and seen by the Derry News states: “Thank you for your letter dated 25 September 2019 in which you ask the Government to consider an apology to the Bradley family following the findings of His Honour Judge Kinney.

“Your correspondence has been passed to me as the Minister for Defence People and Veterans. The findings are very detailed and my officials are currently considering them. I am not in a position to comment until this process has been completed.”

However, Mark H Durkan believes the short timescale of just 50 days between the Bradley family seeking an apology, Mr Mercer’s response to it and the MoD lodging court proceedings in not merely coincidental.

Speaking to the Derry News, Mr Durkan said: “I have to wonder if an apology had not been asked for would the Ministry of Defence made this move?

“It is hard to fathom on what basis they are challenging the court’s decision. The findings of the Inquest were explicitly clear. In fact, when I wrote on the family’s behalf seeking an apology I struggled to leave out some of the judge’s conclusions because there were so many of them including that the killing was unjustified.

“All the family was seeking was an apology, which is the very least that they deserve.

Given this move, I cannot help but conclude this decision was politically motivated. I will continue to back the family in their pursuit of truth and justice which everyone deserves regardless of what anyone was involved in.”

In a very brief statement, Seamus Bradley’s brother Danny told the Derry News that the development had left him and his family “shocked and hurt.”

It is anticipated that a decision on whether the MoD will succeed in their application for a judicial review will take between six to eight weeks.