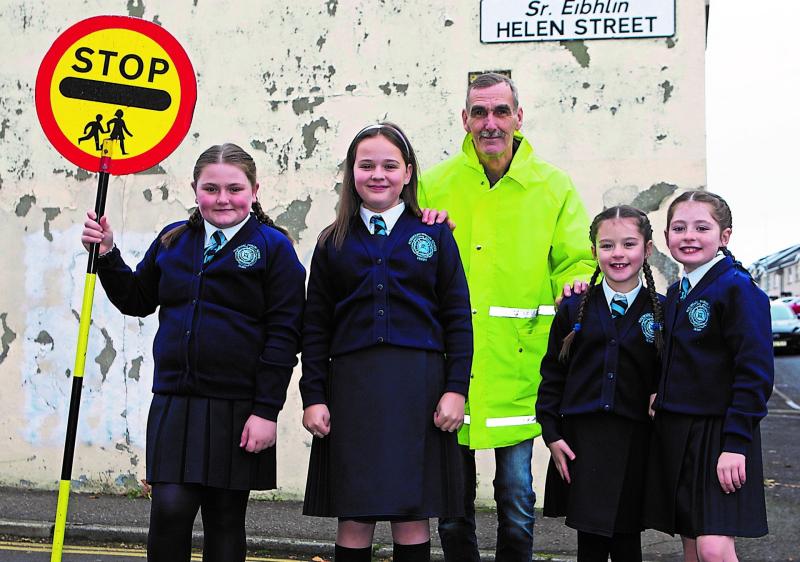 A talkative Derry lollipop man who took on the challenge of a lifetime with a week-long sponsored silence has raised a substantial sum of money for a cancer charity.
John McGinley, who can be seen regaling children and passers-by at his Helen Street patch every morning, told the Derry News that he successfully completed his challenge.
It’s rumoured that since it ended John has been ignoring the ‘STOP’ signs and is now talking twice as much.
The sponsored silence took place during working hours so he was unable to speak to the children or parents from 8am-5pm on October 7-12 despite the mischievous efforts of the school principal and some of the P.7 pupils.
Rosemount P.S. run a fundraiser every year which is organised by teacher Aisling McMenamin and canteen lady Mary Murray for Macmillan Cancer Support. Therefore, John decided that any money raised would go to the same charity.
Between both the coffee morning and John’s sponsored silence over £1,700 was raised and a few late donations have been filtering in.
Speaking to the Derry News at the weekend John said of the challenge: “I didn’t speak until I came out of the school at 5 o’clock. It was tough enough. My wee girls were saying, ‘try not to break it’, but it was hard because I’m used to rambling on.
“The principal was taunting away at me, saying ‘John, ye haven’t seen the caretaker?’ and I would shake my head, then he’d go, ‘do ye know where he is?’ and I would just shake my head again.
“And someone of the kids, the primary 7 pupils, would say ‘gone speak to me’, so they were doing a bit of taunting too. But they couldn’t break me.”
John has his sights set on another charity fundraiser after Christmas when he plans on walking from Derry to Buncrana and back again - he says Macmillan will most likely be the beneficiary again.
Sadly, a number of John’s close family have had cancer and he appreciates the emotional, physical and financial support the charity offers.
“They’re known as the ‘little angels’ and they do a great job. If you have somebody belonging to you suffering with cancer then they put them at ease.
“The work they do is amazing, if you ever have any issues you’re able to phone them and they come straight away.
“I’m happy to see this money go to them because it will go towards helping more families in Derry.”