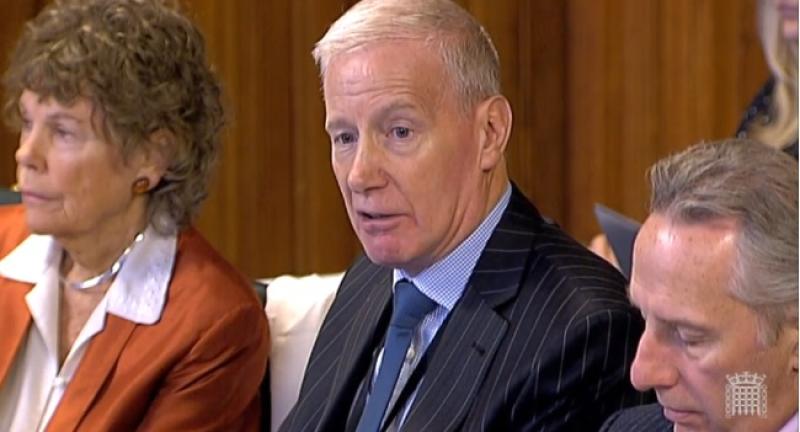 An MP for East Derry has criticised the British government for allowing itself to be “blackmailed” by Sinn Féin and questioned whether devolution is now finished.

A meeting of the NI Affairs Committee heard evidence from Secretary of State for NI Julian Smith and other government officials.

During the evidence session Mr Smith acknowledged that £15m spent on MLA salaries since 2017 is “unacceptable” when challenged by North Down MP Lady Hermon.

It was also stated that relative trade flows set out in the impact assessment accompanying the Withdrawal Agreement Bill show that NI has a total trading bill of £18bn with GB, £5.2bn with Ireland and £3.6bn with the rest of the EU.

DUP MP Gregory Campbell therefore said trade on an East-West basis is “significantly greater” than any other trade.

He referred to a Treasury Select Committee meeting where it was mentioned that the current Brexit deal will result in administrative costs for businesses.

“Can you understand that businesses will want more than a reassurance? On the other side of the equation people ask for and demand that it be written in stone, in a legislative process, because guarantees come and go and governments come and go, but the legislation is more difficult to change.

“Do you understand why people would want to see that reassurance that you’ve given in the Bill?”

The SoS said he does understand and if the Withdrawal Deal Bill was brought forward he would look to insert clauses to make “crystal clear” that the unfettered access commitment in relation to the flow of goods from GB to NI are laid down in law.

He also said that he wants to work with every sector to minimise any challenges, adding that he sees it as a “huge opportunity” for businesses here.

Labour MP Conor McGinn said unionists and nationalists have inevitably become divided on the constitutional issue of whether to have a land border on the island of Ireland or one down the Irish Sea.

The St Helens North MP asked if the best way would be for the whole of the UK to be in a Customs Union with the EU.

The SoS disagreed believing it would prevent the UK from striking trade deals with other countries and he feels the current deal offers the “best of both worlds” for NI.

Mr McGinn put it to him that it is bad for NI to have either border.  Julian Smith referred to his previous response to Gregory Campbell and sought to give assurances that there will be very little bureaucracy involved.

Who made the “seismic” decision to switch policy from a border on the island to one down the Irish Sea?, Mr McGinn asked.

The complaint about the previous Bill was that NI would be trapped in a backstop, Mr Smith responded, and that has been done away with.

He was then asked if he wished to apologise to unionists for making a promise that couldn’t be kept, but said he believes it has no impact on the constitutional position of NI or workings of the Assembly.

Speaking later at the meeting, East Derry MP Mr Campbell said that apart from Sinn Féin no other has put down an “absolute fundamental precondition” before they will go back into Stormont.

In Mr Smith’s view there are a “number of issues” and he urged all parties to be “flexible”.

“I understand the need for diplomacy but there is only one party saying we will not move until a pre-condition we have set arbitrarily is met and that’s Sinn Féin,” Mr Campbell remarked.

He added that through amendments at Westminster one of their preconditions has been met and there was a “ludicrous and absurd” suggestion that the other one should be met, “the Irish Language Act”.

The DUP MP said the British government has accepted this “blackmail” without asking for cross-community consent.  He said either devolution is over or the rules have to be rewritten.

Mr Smith responded: “There are absolutely no plans for the Irish Language Act coming from Westminster.  Absolutely none.

“On the issues of abortion and same sex marriage, these are devolved matters, they should be resolved in NI, the challenge I think there is, is that as the Assembly continues to be absent, no Executive, colleagues here at Westminster got frustrated and it was a free vote issue that went through.”