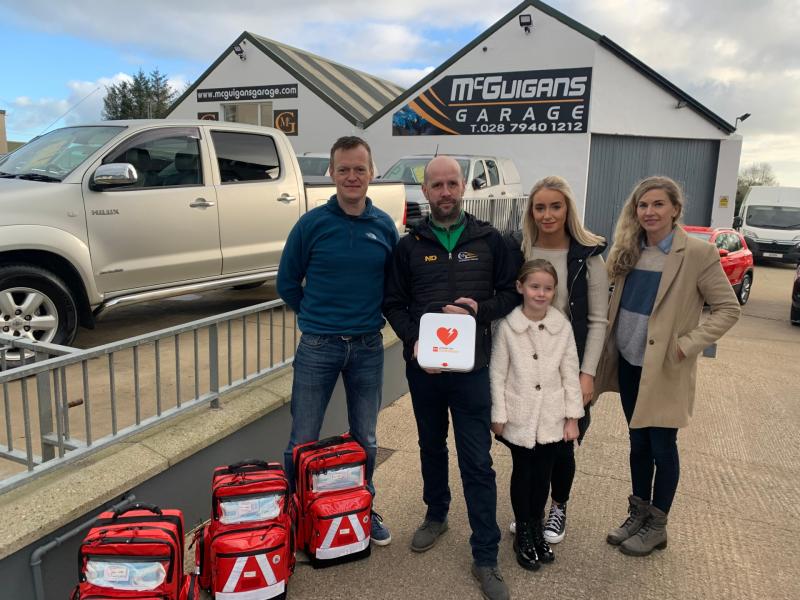 Pictured left to right; Darren Mulholland, Kieran, Caitlin and Emma-Rose McGuigan and Carina Moran with the defibrillators Kieran donated to the community.

It started off as a normal Sunday for Swatragh man Kieran McGuigan however in a few short hours the dad-of-three's life changed in the blink of an eye.

Feeling refreshed after returning home from a family holiday in Portugal just days before in July 2018, the then 43 year-old decided to go mountain biking in Garvagh Forest before having lunch with his family in Friel's Restaurant.

In the early afternoon, tired from his busy morning, the car salesman settled into his armchair in the living room of his Garvagh Road home.

However Kieran's daughter Caitlin soon noticed that something wasn't right with her dad after spotting his eyes 'rolling in his head'.

The quick-thinking teen, then aged 16, called an ambulance before bravely placing her father flat on his back on the ground.

Wife Tracey was in Garvagh when she received a frantic call from Caitlin saying something was wrong with Kieran.

She dashed home and, along with Kieran's brother Terry, immediately started CPR in a desperate bid to revive him.

Recalling her horror of watching her 'fit and healthy' husband lying on the floor in front of her, Tracey, a trained nurse, said she 'automatically went into autopilot mode'.

“He had turned black, he was unrecognisable,” she said, adding: “As I was giving CPR I couldn't count the 30 compressions. I just physically couldn't count, so much was going through my mind at the time. The girls were upstairs screaming with fear and our son Ryan was up trying to settle them. At one point I just left the room because I knew I had to go to them to make sure they were ok.”

That afternoon, Slaughtneil man and first responder Darren Mulholland was in Maghera picking up a few items at the shop.

As he was driving out of Eurospar's car park, he received a message on his phone that stated that a defibrillator was required for a nearby emergency.

Darren sped to the McGuigan family home where he used the defibrillator to shock Kieran three times before paramedics took over.

For Darren, the scene that unfolded in the house that day was one which resonated with him.

It came almost seven years after the death of his own father, Martin Mulholland.

Martin, who was in his fifties, was refereeing a hurling match in Swatragh in August 2011 when he collapsed after suffering a cardiac arrest. A defibrillator was used in an attempt to resuscitate him however he later died in hospital.

Darren, who was at the game that day, said his father's sudden death was ultimately what drove him to sign up to become a first responder, working through Dalriada Urgent Care.

“Living in a rural area, it may take ambulances longer to get to you so having a defbrillator in the community means that you have a better chance. Those extra ten minutes are vital and means your chance of survival will be stronger,” said Darren.

Kieran, who doctors believe was dead for 22 minutes, was rushed to Causeway Hospital where he spent three days on a ventilator.

After a seven week stay in hospital and undergoing an operation to have a defibrillator fitted, Kieran was allowed to return home.

Despite carrying out tests, doctors were unable to find the cause of the cardiac arrest however it was only when genetic testing was undertaken that they discovered a 'faulty gene'.

Tests were also carried out on other family members and results showed that both of Kieran's daughters Caitlin (19) and Emma-Rose (7) and his brother Terry carry the gene.

“My father Tommy died of a heart attack when he was 82 and we now believe that he had the same gene,” said Kieran, who along with Terry runs McGuigan's Garage in Swatragh, a business which was founded by their late father in the fifties.

“The girls are now taking beta blockers so thankfully they can medicate it.”

As a result of the cardiac arrest, 47 year-old Kieran sustained a hypoxic brain injury and requires regular therapy.

However he is very thankful to be here today to tell his story.

“My longterm memory is very poor due to the starvation of oxygen but I count my blessings every day and I'm so thankful that I am here,” said Kieran.

“The treatment I got from day one, from when Darren rocked up with the defibrillator to now has been brilliant, and the support I have received from my sister Paula and wife Tracey has been amazing. The health service and even my own GP couldn't have done any more and I am so thankful to them all.

“The local community have also been so good and we are extremely grateful to them all.”

Kieran organised a fundraising walk and raised £5,500 – money which was used to purchase three defibrillators for use in the community.

“Having Darren there with a defibrillator on the day was a game changer. I wouldn't be here today if it hadn't been for the defibrillator – that's a no-brainer,” said Kieran.

“Luckily I had a fairytale ending and I am now glad that we were able to purchase these defibrillators, thanks to fundraising from the community.”

“We want to say a special thank you to Kieran,” said Carina, adding: “Thanks to him we don't have to share defibrillators. When faced with a situation like Kieran's, time is the biggest issue and you need the defibrillator pads on asap. Kieran wanted to give back to his community and we are so thankful for his generosity.”