A County Derry firefighter has spoken of his successful battle with leukaemia as he and his station colleagues prepare to launch a huge fundraising drive. 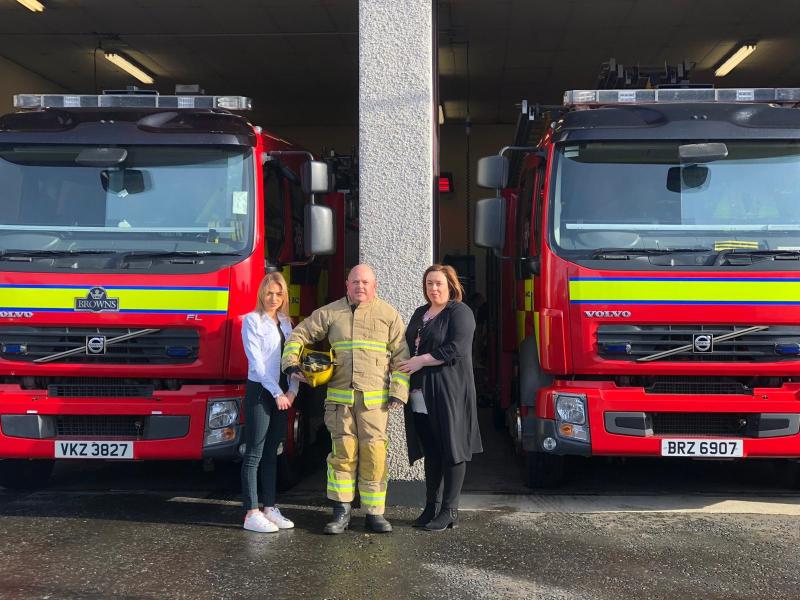 Alex Selfridge, pictured with his fiancee Tanya and stepdaughter Nuala, will be among local firefighters raising money for good causes in the next few weeks.

A County Derry firefighter has spoken of his successful battle with leukaemia as he and his station colleagues prepare to launch a huge fundraising drive.

Alex Selfridge, from Maghera, was diagnosed with the form of blood cancer in September 2018 after he initially noticed feeling more tired than usual.

“The first thing that happened was that I began to feel very fatigued. I went to the clinic in Maghera to see Dr Monaghan and she put me on a course of antibiotics.

“They finished in two weeks, but these lumps started coming up in my neck. I went back to Dr Monaghan and she started doing bloods.”

In the meantime, Alex continued as normal and it was only after he began coughing up blood that he became concerned enough to contact her again.

“I was on a course in Pomeroy on how to deal with RTCs, cutting people out of cars and all, but I coughed up blood that morning.

“I wasn’t really concerned because I thought I’d just bit my tongue or something that night, but I rang her the next day and she sent me up to Antrim [Area Hospital].

“I got there at 7 o’clock that night. They did more bloods and stuff and diagnosed me with cancer at 10 o’clock. Three hours later - it was that quick.

“Two doctors came in and they said: there’s no easy way to say this, but you have cancer.”

The diagnosis came as a shock to Alex, but there was little time to dwell on the news as he was quickly transferred to Belfast City Hospital, where a bone marrow test confirmed it.

“After that, I was in Belfast City Hospital - Ward 10 North - for about 11 and a half weeks where I got two rounds of chemotherapy.

“That’s when reality started to set in for me and my family.”

Alex says that when the realities of the situation were just starting to bite, his chosen charity, MacMillan Cancer Care, were a huge help.

“MacMillan helped me understand where we stood financially, what grants and stuff were out there for us. The bills keep coming in, unfortunately.

“They gave me books to explain what kind of leukaemia I had, so I could read it in my own time and take it all in.

“They also gave a grant out for heating oil and money for Tanya, my fiancée, to use to go up and down to the hospital.”

Alex also praises his friends and family, with Tanya and stepdaughter Nuala being steadfast in their support.

“Tanya took a lot of time off work at Oakleaf Restaurant. They gave her all the time she needed and even volunteered to run her up and down, and I’d really like to thank the Molloy family for that.”

“Some nights she even had to stay up there in a hotel, which the Trust paid for.”

It was Tanya that Alex recalls being with when he received news of a 10/10 match for his bone marrow transplant.

“They had tested my close family first, but unfortunately, they weren’t a match,” says the 47-year-old.

“Anthony Nolan Trust then started the worldwide search. About two months later, I got a phone call to say they’d found a 10/10 match.

“They didn’t tell me anything else about it, only that he was a 19-year-old male. That’s all I know.”

With transplants from Mixed Unrelated Donors (MUDs) unavailable in Belfast, Alex was sent to St James’ Hospital in Dublin and had his transplant carried out on May 10, 2019.

The procedure was a success, but after three months, Alex suffered a relapse when doctors found traces of leukaemia in the cerebrospinal fluid (CSF).

Fortunately, after a month of intrathecal chemotherapy, the symptoms cleared, and Alex has been cancer-free now for five months.

“It’ll be a year now since the bone marrow transplant now on the 10th of May and I’m getting stronger every day, compared to what I was. I feel a lot better now, a lot stronger.”

“MacMillan organise free rehabilitation too in the leisure centres, so you can build up your strength and your breathing again. It’s all there if you want it and it’s all free.

While the station is pulling together for their current fundraising drive, the firefighters’ spirit was also evident throughout Alex’s recovery in hospital.

“That 11 and a half weeks can feel like an eternity in hospital, but one evening the firemen from the station all landed up.
“I was delighted to see them and it lifted my spirits.”

A team from DKMS Donor Registry will be at the street collection on May 2. If you would like to make a donation to the firefighters’ fundraising effort, you can donate via their Just Giving Page - https://www.justgiving.com/crowdfunding/magherafirefighters-runforlife-1