Throughout October and early November, students and their form teachers were hard at work collecting and organising materials for the annual Christmas Shoebox Appeal 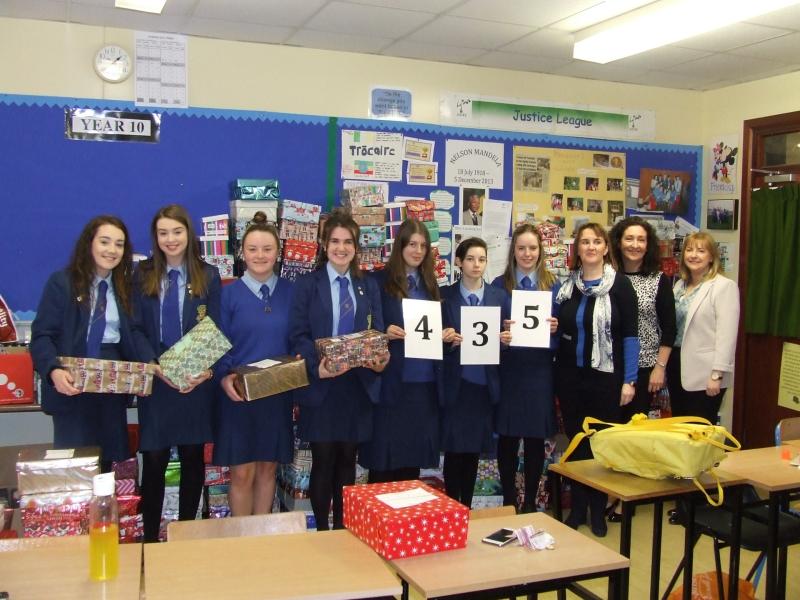 Members of the Loreto College Justice League, who collected 435 shoeboxes for the Road of Hope appeal.

We are just three months in to the school year but already, pupils and staff at Loreto College, Coleraine have carried out impressive work for local charities.
Throughout October and early November, students and their form teachers were hard at work collecting and organising materials for the annual Christmas Shoebox Appeal for the Road of Hope organisation.
‘The Road of Hope’ is a Rasharkin based charity whose aim is to support the children and elderly in Eastern Europe, who have suffered extreme isolation, poverty and trauma as a result of conflict.
The shoeboxes, filled with every-day items such as soap and facecloths, toothpaste and toothbrushes, hair accessories, small toys and sweets are delivered annually to those who wouldn’t otherwise receive a Christmas present.
This year, a magnificent total of 435 shoeboxes were collected by Loreto’s pupils and these will in turn, bring joy and hope to those who need it most this Christmas.
Fiona Kelly of the Road of Hope organization paid tribute to the members of the Loreto College Social Justice League for their hard work, dedication and concern for others in collecting such an impressive number of shoeboxes for the appeal. Tribute was also paid to Mrs Mullan, mother of former Loreto student Mary Mullan, who donated 30 shoeboxes.
As Christmas approaches, the students and staff of Loreto College will continue their efforts in support of a number of extremely deserving causes.
Mr Michael James, Principal of Loreto College, paid tribute to all the students and staff who had worked so hard in these endeavours, under the leadership of Social Justice Co- ordinator, Mrs Lorraine McCool, assisted by Mrs Fiona McCloskey.