Andy's Park and ride in aid of NHS charities 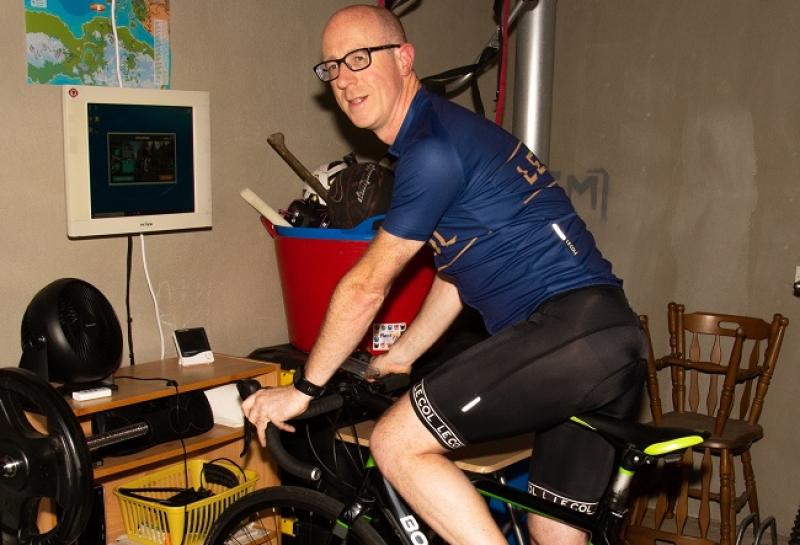 A Park man pushed himself out of his comfort zone to cycle the equivalent of the distance from Derry to Cork to raise funds for NHS Charities Together, all from the 'comfort' of his garage.

Andy McInroy (45), originally from Ayrshire in Scotland, has lived in Park for 20 years and works in Seagate Technology in Derry.

He has cycled the 'Inishowen 100' route on three occasions, tackling the quick and nasty Mamore Gap and the never-ending rolling hills of Kinnagoe Bay.

“I have also done the Man of Sperrin, the Causeway Coast and various sportives and I was looking forward to the Wicklow 200km in June – that would've been by longest one so far,” Andy told the County Derry Post.

Like all sporting events, it fell victim to the coronavirus pandemic that has shutdown the sporting calendar, but Andy didn't want his training to go to waste.

He picked up on a Facebook challenge by Scottish long-distance cyclist Mark Beaumont, who has cycled around the world twice and holds the world record for doing so.

Beaumont wanted people to cycle 400km indoors on their cycle trainers to support the NHS Charities and it struck a chord with Andy.

At 4.00am last Thursday morning, he headed out to the garage and onto his indoor trainer to begin his challenge.

“This was to be the longest cycle I have ever attempted, the equivalent of cycling from Derry to Cork. My trainer was hooked up to the Zwift online cycling system on my computer. It allowed me to cycle up and down hills in a virtual world with the difficulty changing according to the terrain.”

Andy livestreamed his exploits so friends and family could log on through the day and keep him entertained and motivated.

Fatigue began to test his physical and mental resolve. Aside from three breaks for food and rest – amounting to no more than an hour in total – he managed to keep his focus on the task in hand.

“I don't think I could've done it without the help of people coming online and sending me messages of encouragement,” he admits.

“I thought that if I broke it down into chunks and took four hours for each 100km, it would take me 16 hours. I was conscious of overdoing it and lacking energy in the afternoon.”

He would burn 7,500 calories in total, but he had lost his appetite later in the cycle. By 3.00pm and with just 70km remaining, someone got the message to him that if he 'upped his game' slightly he would be finished inside 12 hours.

“When I went back on the bike after my final break, I began to push harder to get under that (time) and I came in at 11 hours 51 minutes – so I smashed what I had originally planned. I knew I would beat it, but I didn't think it would by that much.

“My wife (Roisin) and children (Finn and Rosie) came out towards the end of the cycle to keep me going, celebrate with me and handed me a welcome beer.”

His pain didn't stop there and Andy's body went into shock shortly after getting off the bike.

“I got really cold for about three hours and maybe my body, in the last few hours, was overheating for so long. Maybe the body was trying to cool me and went too far the other way and then the shivering started.

“I eventually came round and was able to take some dinner by 9.00pm. I think the day had taken more out of me than I initially thought.”

Andy's initial fundraising target for the NHS Charities Together was £400 and hoped to double it, but at the time of going to print he had raised almost £2,300.

“This is way more than I expected and it's a great charity to be involved in. The money is not to replace government funding, it is extra – for things like toys on children's wards, to help nurses with accommodation during the Covid-19 problem we are having, for social things like mental health and that sort of thing.”