People tuning in to watch Mass online during coronavirus self-isolation

‘Huge’ numbers of people are tuning in to watch live webcam footage of Mass from Derry churches as they self-isolate in a bid to slow the spread of coronavirus.

For many older people in the city going to church is a pivotal part of their daily routine and may be the only time they get to socialise with friends.

The essential lockdown announced by British Prime Minister Boris Johnson this week put a stop to all social events, including weddings, baptisms and other ceremonies, but excluding funerals.  He did however add that ‘places of worship should remain open for solitary prayer’.

Speaking to the Derry News yesterday, Bishop of Derry Donal McKeown said the first priority of the Catholic Church is the people who are worried, lonely, feeling abandoned and people whose timetable has been turned upside down.

“We’re looking for ways to reach people with materials that are going to be fulfilling to them.  How can we help people who are in a very different situation than the one they were in a month ago,” he explained.

There was a sense in the community that coronavirus hadn’t reached Northern Ireland yet, he said, and when it did people would ‘hunker down’ but the stark Westminster warning made it clear that ‘unless we clamp down now it will hit us in the not too distant future’.

Bishop McKeown said that some people have been of the opinion that churches were never closed before and shouldn’t be told to by the state now.

“But I think we’re all clear in churches across Europe that bringing people together in groups on a regular basis for extended periods of time is deadly.”

During Lent St Eugene’s Cathedral would have 600 people through the doors every day for daily Mass and 2,000 every weekend so the adjustment has been difficult for many.

The Bishop was also conscious that priests themselves are used to providing services for people and they need support at this time in finding new ways of ministering after decades of ministering in one way.

Four daily Masses are being live streamed, a series reflecting on the stained-glass windows have been posted online, interesting stories and Anne Marie Hickey sang one afternoon.

“It’s a challenging time for everybody, in secular society and in church society, but what really is encouraging is that there has been such a huge uptake on webcam and Facebook streaming services.”

Mass and a range of other devotions take place throughout the day from 7.30am until 9.30pm.

For example, on Monday there were 8,589 hours of watching the webcam which accounted for 15,000 views and over 5,000 sessions of more than five minutes.

The bulk of these viewers would be UK and Ireland based while others tuned in from the United States, South Africa, Malaysia, Peru and elsewhere.

An Instagram page has also been set-up to engage with young people in the city.

“People want to see the familiar, they could follow Mass at the Vatican or New York but want the reassurance of a local voice and it is helping people in their time of fear, recognising that things are going to get a lot worse before they get better,” Bishop McKeown concluded. 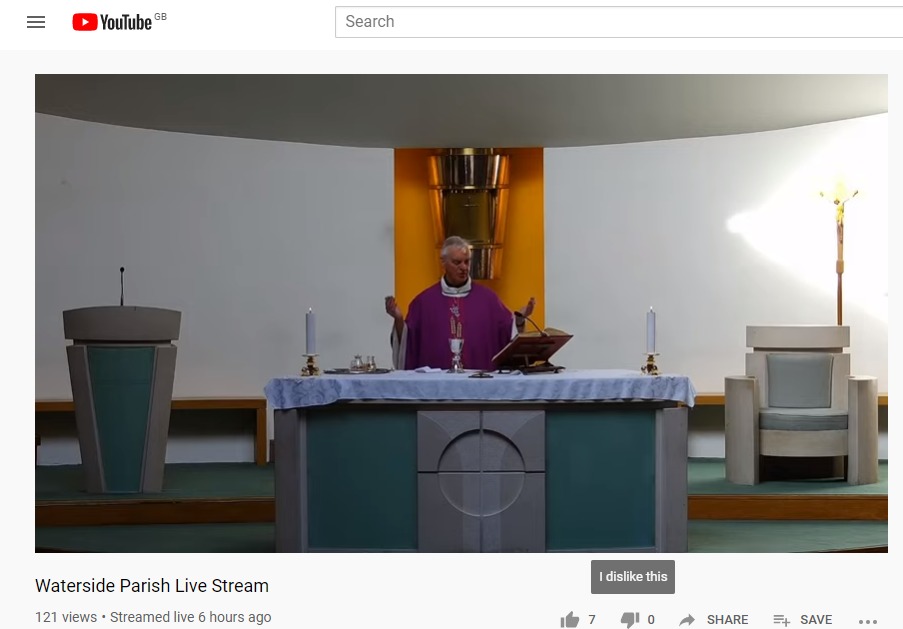 Father Michael Canny of the Waterside Parish said that when the gravity of the coronavirus became apparent that his own parishioners, who would be in the older age bracket, found it hard to break away from their routine.

“As time progressed and the penny dropped, most realised that they were in a very vulnerable category and I think that even before isolation was enforced a lot of them had been in lockdown to look after their own health.

“They found it strange at the start and talked about not having masses but when the enormity of the situation dawned on them they very, very quickly took precautionary measures.

“But I think they will find the latest regulations very challenging because before they could come out for a while and sit apart from other people.”

The parish webcam has become more popular during the coronavirus outbreak but Father Canny said that people prefer to attend when they can to receive Holy Communion.

“I understand that, they’ve lived through terrible times in the Troubles, some of them through the War times but they have never been deprived of going to Mass. It’s very, very strange.”

Around 70-80 people would be watching Mass online but he believes church is all about community and once the current crisis passes he would like to see people coming together to celebrate Mass again.

“There’s no substitute for actually coming out and meeting each other face to face and that has to be encouraged when this is all over.”