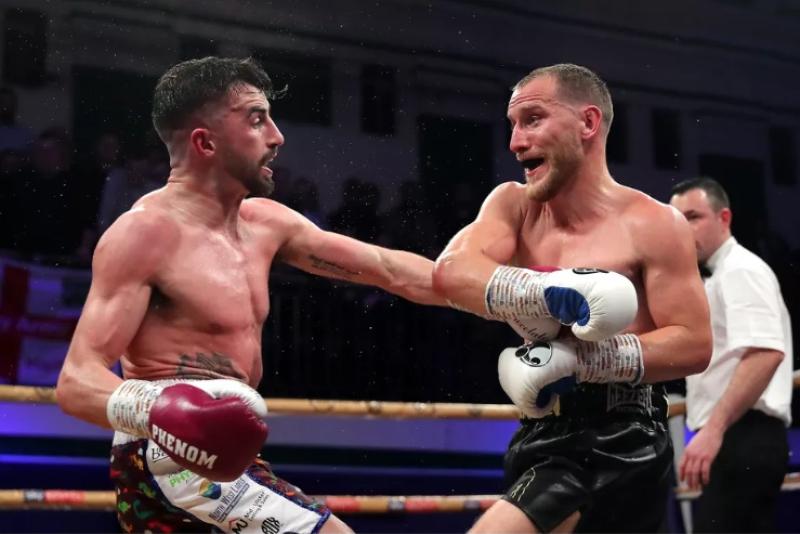 Tyrone McCullagh (left) suffered his first defeat at the hands of Ryan Walsh on Friday night past.

Tyrone McCullagh put on a brave effort but was ultimately eliminated from the Golden Contract competition as he fell to his first professional defeat at the weekend.
The Derry featherweight was hoping to upset the odds when he took on British champion Ryan Walsh at the York Hall in London, live on Sky Sports, but despite starting well, lost a unanimous decision.
McCullagh caused a stir last week when he arrived at the pre-match press conference with friend and fellow pro Tyrone McKenna dressed as characters from classic 90s comedy 'Dumb and Dumber'.
McCullagh was in the zone come fight night however and he began strongly but was eventually broken down by Walsh who sent him to the canvas twice throughout the fight.
Walsh, who has defended the British title six times since 2015 – including stoppage victories over Belfast’s James Tennyson and Marco McCullough, picked McCullagh as his opponent earlier in the week after picking the Golden Ball in a tournament which promises the winner a two-year, six-figure deal.
This was always a huge challenge for McCullagh who stepped up in weight and class to take part in this tournament before cruising past Razaq Najib in the quarterfinals.
McCullagh edge a cagey first round before clearly taking the second with straight shots down the middle.
Keeping out of range, McCullagh continued to keep Walsh at bay in the third and looked more than comfortable in the early stages.
It was much closer in the fourth with Walsh getting closer but the cleaner work came from the Irishman, who was again proving his doubters wrong.
Disaster then struck for McCullagh however as the bout entered its second half as a right hook caught him and took away his legs completely. Following a stumble around the ring, he found himself flat on his back and seemingly very hurt. However, to his credit, McCullagh got back up and weathered the storm for the remainder of the round.
Walsh was building momentum heading into the seventh round, but McCullagh was fighting back, showing he had recovered well from that knockdown.
It all changed again at the start of the eighth round as a big right hand at the start followed by a body assault had McCullagh in trouble. It seemed the end was near but again McCullagh fought back and again made it through the round.
Knowing he was now well behind on the scorecards, McCullagh attempted a spirited fightback, but all hope of a comeback was ended when he was forced to take another count, falling forward to his knees following a salvo from Walsh.
McCullagh answered the bell from the tenth and managed to grit things out, with the contest going all the way to the judges who confirmed Walsh a unanimous decision winner with scores of 96-92, 97-91, and 97-91.