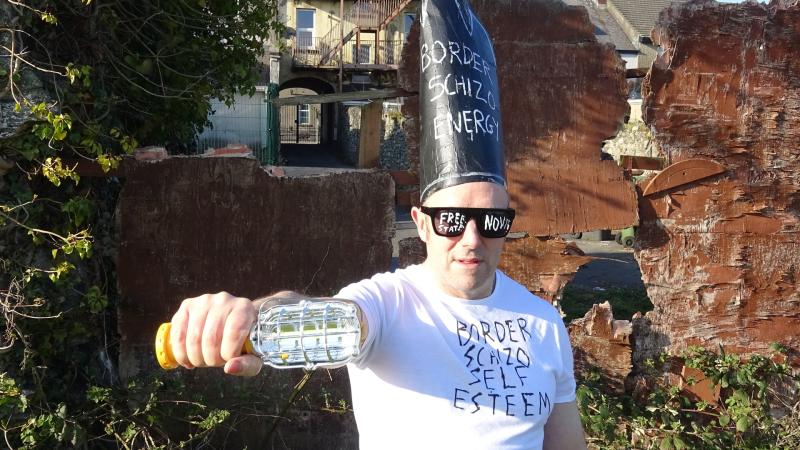 As I’ve mentioned before in these pages, this town is never short of good music at the weekend. This week is no exception.

This Friday night (10th June) Jinx Lennon is playing Bennigan’s to launch his new album, ‘Pet Rent’ (his loving ode to a new trend among Dublin landlords of charging people extra per pet, including fish).

The album has been described as “an hour long garage rock odyssey full of punk, glam and showband sampled beats, a cracked eye lens view of provincial Irish life”. I was talking to Jinx ahead of Friday’s show, and we touched on issues including his thoughts on the current mess in Stormont and the making of the new album.

What first made you want to be a musician?

I liked albums ,I really liked the idea of making a great classic album and still do. I saw Thin Lizzy with two Derry bands; The Tearjerkers and The Moondogs, in The Long Walk in Dundalk in 1980 - this was a great show!

I came out like I was wearing a new skin. Phil Lynott was a proper rock star.

Later I liked the simplicity of the Velvet Underground and their smart lyrics .At first I was happy to play guitar and write the tunes because I never saw myself as a frontman, it just came about that way out of necessity.

Who would you say have been your main musical influences?

I liked awful pop songs when I was about seven until I was about 10 years old, the likes of Tony Orlando, Hurricane Smith, and Paper Lace.

Then I liked folk tunes and cowboy songs and really got into the stories. I was into 70’s ‘prog rock’ then bands such as Television. The Undertones were an influence - I see them as the Irish Beach Boys. There was Big Grá for rap in the 90’s, Public Enemy 'Fear of a Black Planet', the first solo albums by Raekwon, GZA and Mobb Deep. I have gotten into the likes of Dick Gaughan and Richard Thompson guitar styles lately, just because I love the sound .

Can you tell me about the making of your new album?

I made it with Chris Barry in his studio in Drumcondra. I was supposed to release another open tuned psychedelic folk job which is ready to go for next year called 'Walk Lightly When the Jug is Full’ but with covid I didn’t know what to do because the vinyl LP wasn’t ready.

The new album 'Pet Rent' is a bit more ‘punk, garage rock’ than usual, full of sampled beats from 70’s glam bands, showbands and dialogue sampled from the Paisley/Robinson DUP visit to Dundalk in ‘86 from the likes of Jim Wells and others.

The name comes from the new landlord thing in Dublin charging people extra for keeping their domestic animals.

Also, overseas vulture funds buying up whole estates, while locals can’t buy a house or get a mortgage due to scarcity of available property.
The music deals with mental health issues, self-belief, bullying at school and work, domestic violence, Irish life in general - with a bit of humour at the same time, to keep it real and keep a light on!

What are your thoughts on the current state of things here up north?

Both the DUP and the Shinners are a pain in the arse. The way the Shinners push the border poll and United Ireland down people’s throats is a bore, and they know that will always get the backs up for a section of the community, so it seems trite.
The DUP cannot stand the smell of change and are stuck in the 1700's.

Ordinary people are suffering while all this goes on and cannot make ends meet or get proper healthcare. It’s up to the people of the north to say listen assholes, f**k the Orange and the Green and get the finger out or get out.

People who are trying to feed their families and paying the bill's might have no time for the nuances of sectarianism .Nothing is black and white on this island.

For instance my own family on my mother’s side have heavy republican history. My mother’s name was Farrell, her cousin was Mairead who was shot at Gibraltar.

Yet my Mother's great grandmother was from Presbyterian stock from Lisburn who married a local Dundalk Baker and was disowned so I'm told.

The whole island is a patchwork quilt of cross pollination between the two sides to some extent. James Nesbit is right in saying one thing, that if the Island is ever united it will be named something like United Island rather than United Ireland.

Finally, are you looking forward to playing Bennigan’s?

Yeah, it's been too long now. 2013 I think, was the last time I was playing here .Derry feels very much home to me, there’s definitely a similar border head thing as Dundalk, the same moonwalk Sergio Leone look!

Jinx Lennon plays Bennigan’s this Friday with special guests 7 Daughters. His album ‘Pet Rent’ is out now. Find him on Instagram @jinxlennon.