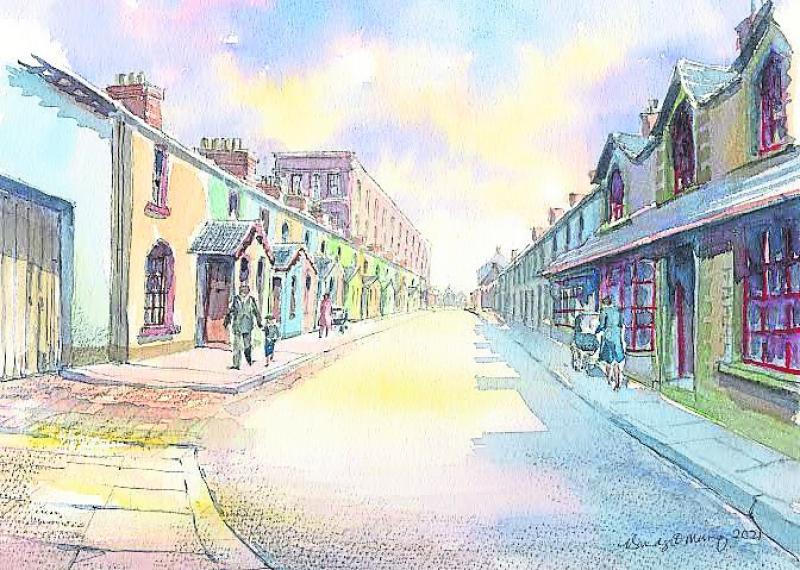 The sun sets on North Street, Rosemount as it was in the 1960s, painted by Bridget Murray - one of more than 30 images that will go on display at the Derry's Streets exhibition at the Millennium Forum

More than 30 paintings of Derry street scenes from the last century are to go on display at the Millennium Forum later this month.

The Derry’s Streets exhibition by Bridget Murray (née Harron) will be part of a special cultural evening featuring snapshots of the region’s music, literature and art - for returning expats.

The event - sponsored by the new Derry-Donegal diaspora association, Futureproof North West, will take place at the Forum on October 28. The exhibition then will run at the Forum for several weeks.

Ms Murray, who is still enjoying a full-time career in freelance illustration, teaching and facilitating in art, has been exhibiting for more than 35 years.

This latest exhibition draws on a series of paintings she was commissioned to produce for the late John Bryson’s seminal history of the North West - titled Derry’s Streets: 521-2021 - which will also be launched at the Forum at the October 28 event.

A brochure of the exhibition will be issued next week, and signed prints of eight of Ms Murray’s paintings will be available.

The Futureproof celebrations will also feature a choral recital from Allegri and guests, hosted by Maurice Kelly.

Futureproof chairperson Sean Downey said the diaspora group, which was inaugurated at Dublin’s Mansion House in 2019, aims to support conversations that will help the region.

“As part of this, we plan to organise activities and events to promote networking and relationship-building and strengthen the community of north westerners across the islands and further afield.

“We also hope to provide support through the network to people in the North West and the diaspora across these islands and further afield seeking to develop business, promote culture and foster educational opportunities.’

Further information on the group, and the Forum event, will be available from futureproofnorthwest .com.