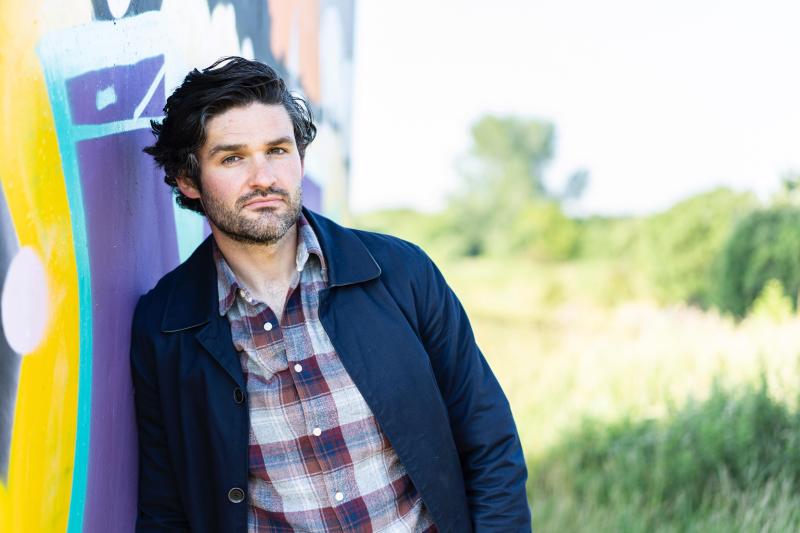 Apart from being a fantastic football and soccer player, George Hutton is also a bit of a singer.

Over the last five years he has lived in Dublin, Vancouver and London, crafting his own way through music.

He has toured the States with the Five Irish Tenors and Europe with Anuna.

He’s back in Derry and was recently working with Kieran Brown.

“That’s how I started working with Paul  Casey (no introduction needed).

“Kieran had organised to record a song we did called Hold On which mainly focused around the area of men’s mental health and we got a great response.

“Paul really believed in me and what I could do as a performer/vocalist. I’ve been performing for quite a while so I’m no stranger to the stage and singing is all I want to do.

“So, from there I took matters into my own hands, recorded my first album with Paul and launched it in the Guildhall which in the end almost sold out so I was buzzing and quite overwhelmed with the response.

“Then, with the band The Inside Out, we had just launched our EP in Sandino’s and it was class singing our own tunes to a decent crowd, about two weeks after that Paul buzzed me and asked me did I want to do Homegrown which was an unreal experience and to share the stage with one of my favourite bands PORTS was pretty special.”

He really talks that enthusiastically. He’s a wee bit like being always at that point just before drunk when you’re feeling great – that’s George.

You’ve been busy promoting your own stuff but who else from Derry are you into?

“At the minute Conor Mason’s new album On the Surface is on repeat, the first listen I liked a few songs, after the second and third I’m now totally hooked. A brilliant musician, a beautiful voice and just total sincerity in his delivery.

“PORTS are another and I’m itching to hear their new material, they shared a little at Homegrown and I loved it, they’re a masterful group of musicians and they just ooze comradeship, The Few and Far Between and Ancient Wave are my go to tunes.

“Steven McCool is one of the best singers to come out of this town and he and all the band are fantastic. Elma Orkestra’s Flutter: Part One was something I didn’t see coming from Eoin and its cinematic style is stunning.

“One song, Drive, in particular, got me through some tough times in London if I’m being honest. I went to BLOOD’s album launch and yeah Noella and Jeanette are my cousins, but they’ve been a big inspiration of mine growing up.

“Two fearless performers with two beautiful raw and passionate voices, writing songs from their very core, I absolutely love them.”

They absolutely love him back, Noella told me: “George’s music reflects the beautiful soul he is, a gorgeous man with a gorgeous voice,” and Jeanette added, “He does this with a pure heart and a level of passion and love for his art that’s innate”.
He’s also putting the feelers out for a record I’ve been looking for for ages, the absolute dote.

He’s not one for sitting about though, I’m led to believe this is going to be a busy year for him with a few surprises lined up so what’s next for you George?

“Two next gigs coming up are the Ulster Hall in Belfast on February 6. I’ll be releasing my new album in February also and on February 8 I’ve a gig in St Columb’s Cathedral with Ruth McGinley and The Priests.

“Man, the new album is a big step up, it’s very much down that Irish channel but it also really showcases what I do best.”

So, what’s the craic with the new album?

“I’m going to let it go out for pre-order on February 2, with it set for an April 1 release digitally. I get hard copies next week which I’ll leave in Cool Discs, meaning the only place people can buy the actual physical copy before the official release will be there!.”

Keep up to date with George on his Facebook and Instagram and, sure why not, land down to Cool Discs for his albums.
Al do a piece next week, send ye questions