'I love being the baddie' says Derry's panto Queen 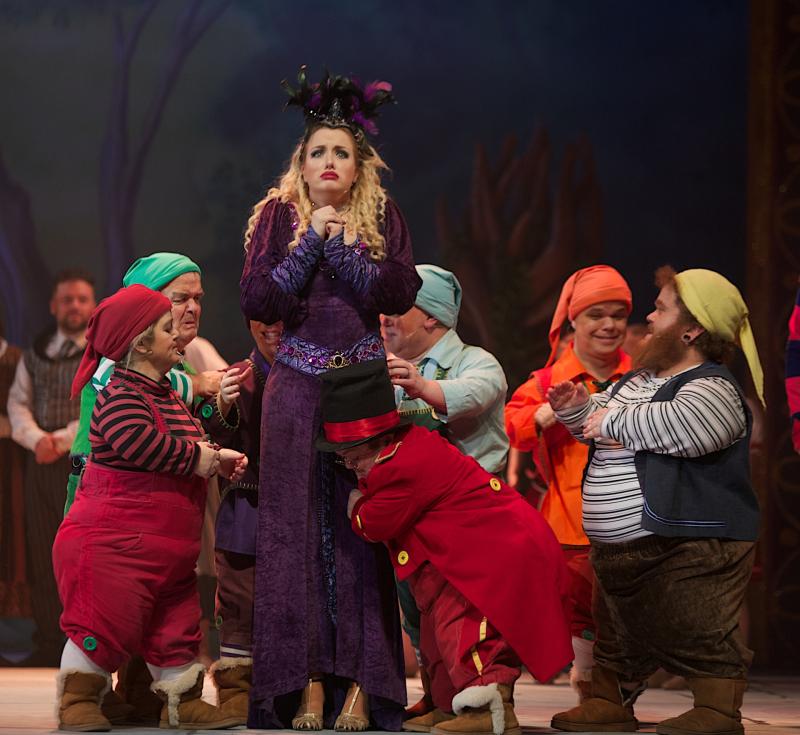 The Wicked Queen Karen Hawthorne on stage with the Seven Dwarfs.

The seasoned panto star playing the Wicked Queen at the Millennium Forum says she loves playing the villain.
Karen Hawthorne, who hails from Newtownards in Co. Down, has appeared in pantomimes across the North and says this is her favourite time of year.
She has previously appeared as the Princess in Sleeping Beauty at Belfast's Waterfront Hall, but she's equally happy taking of the role of the Wicked Queen in Snow White and the Seven Dwarfs.
"She's not a bad baddie," said Karen.
"She's just a bit on the edge.
"Last year I was a cat so this is completely different.
"I prefer the part of the baddie because you get to talk to the audience and interact with them.
"The princess role is more about the singing."
Rachael O'Connor, who fans will remember from TV's The Voice,  plays this year's princess Snow White.
She is currently in the studio recording her own music and when you hear her sing it's easy to see why.
"Rachael is an amazing singer and she's just so lovely," said Karen.
"She's just made for the role of Snow White."
She also shares the stage with William Caulfield as Nurse Molly Coddle.
Stand-up comedian William is now in his 14th year as the Millennium Forum Dame and hits exactly the right note with lots of caustic one liners for the mammies and daddies.

"He's so brilliant at what he does," said Karen.
"He knows what lines will work and how to get the audience laughing.
"The jokes and songs in this panto are so strong.
"The song that Snow White and Prince Charming sing at the end is just gorgeous."
The panto cast are working hard with school shows, evening performances and matinees and it continues right up until December 29.

Despite the hard work, Karen says panto is her favourite time of year."I'm just loving it
"When the kids come for the school shows there is so much noise and singing and then when the adults come in they get the humour."And it is still on after Christmas so it's nice for everyone to come back and wind it all up together."
Snow White and the Seven Dwarfs performs at the Millennium Forum until Sunday December 29.
Tickets are priced from £10.00 and are now available from the Box Office.
Telephone 71 264455 or visit millenniumforum.co.uk  for bookings. There will be a Relaxed Performance & Dementia Friendly Performance on Sunday December 15 at 2pm and a Makaton Tutor Interpreted Performance on Sunday December 15 at 2pm.